Welcome back to the “real” life of Dinosaur Bear, a world where magical trips to Alaska and long hikes through the mountains of Montana fade away to things like learning Federal Tax codes and pretending to care about Corporate Law. Yes, the specter of law school has once again descended into the life of ole’ Taco, which means I have a fresh armada of things to listlessly complain about on my blog! 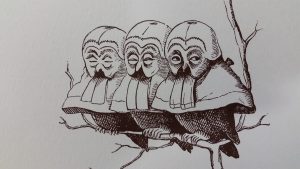 Owls as judges, because that is always relevant (notice the increasing sleepiness).


Which means I’m supposed to be bored, right? Well, I’m not bored – at least not in the traditional sense. No, I wouldn’t say “bored” is the best descriptor of how I feel, but I think you could probably label me “conditionally apathetic.” A lot of that is my own fault for stacking my schedule with a bunch of stuff that I’m only tangentially interested in and subsequently with very little that I’m actually interested in. See, after being a clinical student for all of 2L I found myself in the precarious position of not having taken some pretty important classes, like uh, Constitutional Law for instance. Cause I mean, yeah, like what good is Constitutional Law or anything? Pfft. I think you see the issue.

So, this semester I’m loaded down with a bunch of hardcore black-letter doctrinal classes, complete with loads of gunners and elitist old professors who ignite about as much enthusiasm for learning in me as would being hit by a meteorite. Actually no, if I survived getting hit by a meteorite I’d probably be more inclined to learn about meteorites, so this is actually less invigorating than being struck by a fiery hell rock from space. Of course not all is gloom and doom. For instance I have a reading group and a seminar that I’m actually interested in. Of course they happen to be at night, after about 7 straight hours of “real” class, so by the time I get to them I’m practically a zombie, but that’s beside the point. I’m also a research assistant for the first time in well.. ever. Not only do I get to do some interesting work there, I get paid to do it. Now, I get profusely underpaid. It’s really kind of pathetic. I made almost as much working at a hardware store as a floor pleb as I do as a research assistant. Not that I’m faulting people who work at hardware stores, but let’s be real here, there is a bit of difference in job valuation to be considered – namely that I’m like 4 trillion dollars in debt and am working at a graduate level for the richest university in the entire world. But hey, it’s better than no money I suppose and plus I’m doing this more for the connection than the paycheck. Lurking behind all of this is also my most favorite side-activity in the world, my journal.

The culmination of the above is that my Fall of 3L semester is actually the busiest semester, course-wise, that I’ve had since Fall of 1L. Yes, you read that correctly, somehow I made 3L busier than 2L. Somebody lied to me, or more accurately, I lied to myself. Now, would I say that on the whole I’m busier than I was 2L (as in, not just coursework) – namely that god awful semester I was a tech editor –  that I’m not sure about, but it’s close, and it’s not like there is a winner in this contest, only losers. Of course, I’m still a naive little child and I have this magical belief that next semester will be better, but let’s be real folks, it wont, and that will be my fault, but I’ll bitch about it all the same. Life is grand.

Actually life isn’t too bad right now. I mean yeah, I’ve somehow managed to make the bulk of this semester revolve around the one element of law school I utterly despise – that is, the Ivory Tower as opposed to the trench work – but outside of that, I feel pretty good about where I’m headed. Now, I have no solid idea of where I’m actually headed, but if you’ve read this blog for very long then you’ll know that I seldom do. As cliche as it sounds, it’s all about the journey, and as I’ve progressed further into the law school chapter of my life I’ve become more and more at peace with this aspect of things. Now, that doesn’t mean it’s easy to listen to the vast majority of your classmates talk about their secured positions making $180,000 a year after school (not that I care much about the money, it’s more of the security aspect of it). Yeah, that can be rough. Heck, I think one of the best things about going into the private sector from a place like HLS is that you do have the security of just chilling all of 3L before you head off to your 180k and/or Circuit Clerkship then 180k. Many people in the public interest sector have no such security blanket, in fact, most of us don’t even have a bed. That’s a bit of a stressor, what with the oh 4 trillion in loans and all, but it’s also not really ruining my life or anything because I’ve got some good ideas to work with and some people who will likely be in my corner when the time comes. I’m not going to get into my evil master plan yet, but rest assured I have a pretty boss timeline thought out for myself that will see me going to some very exciting places should it all work out. Naturally this will require a lot of work on my part, some of which is unprecedented, but the benefit of 3L is that you sort of generate this “shield of apathy” – as I described it to my OPIA advisor – towards a lot of the small stuff (e.g. the law school crap that doesn’t really matter to me), so that’s a plus. Still, things aren’t going to get any easier, which I guess has been a recurrent theme for me.

So I guess that sort of highlights the balance of things. I’m pretty much burnt out on the school part of law school, but I’m excited about the future and am still enjoying the practice part of law school, which I know isn’t in the title but work with me people. So I suppose the TL;DR of this entire post is that I have a classic case of senioritis. The one difference is that I’m less looking forward to graduation at this point as I am simply being done with the Fall semester. I have some potentially exciting stuff happening the Spring (namely an inversion back to 1 doctrinal class), so that should keep me trudging alone like a good mono. The one outlier is that I’ve yet to really “settle in” to the journal this semester, so I’m still not entirely sure how much joy that will be bringing to my life in the next few months.

Anyways, that’s pretty much the gist of it. I know in the past I’ve shared some more nuanced thoughts on things as I start the school year, but this time around I find myself caring a bit less about this exact moment and a bit more about the near(ish) future. I suppose that is kind of the point of 3L after all, unless you’re one of those people who already has a $180,000 paycheck waiting on you, then I’m really not sure what the point of 3L is.

With that said, Dinosaur Bear should return to a more usual posting timeline for awhile. SB and I have a cool local day-trip planned (which will already have happened by the time this posts) so that will probably be the next thing you see in your inbox from the ole’ blog.

I look forward to sharing the proverbial “twilight” of my law school years with you. 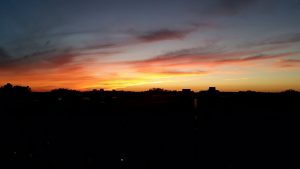