Today started out pretty bleakly, it was cold and grey outside, and it looked like it could start raining at any second. Since I slept a lot yesterday I couldn’t really sleep in much today, even in spite of the perfect conditions for doing so. I decided that it would be a good day to head to the Ny Carlsberg Glyptotek, an art museum which holds the former private collection of Carl Jacobsen (1842-1914), the son of J.C. Jacobsen, the founder of Carlsberg Breweries (which was named after Carl). The museum is primarily focused around statues, but there are some paintings as well, with Picasso, Monet, and van Gogh all being represented.Sunday was the best day to go not because it was raining, but because Sunday is the one day of the week where entrance is free, so naturally that’s when I went.

Of course things can never be easy, and as soon as I left the kollegium it started pouring outside. My cheap umbrella did as good as it usually does (i.e. not very) and I made it to the bus stop where I waited.. and waited.. and waited. Until I finally realized that for some reason, which is still unknown to me, the buses had been rerouted. This is problematic because this is the only way for me to get to class, without walking 15 minutes to a train station, that doesn’t even get me that close to class. But I figured it out, via a different route. Right as I got to the museum it stopped raining (of course). 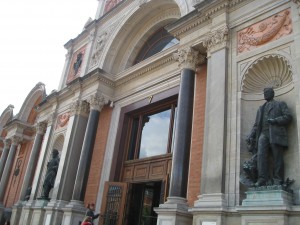 After entering through the massive glass revolving door, I noticed that the air was a little warmer inside than I might have expected. I didn’t think much about it at first, especially since while I was depositing my backpack in the lockers things were much cooler. But as I progressed back up to the main lobby, I noticed why things were so warm, the “center” of the museum is a giant tropical greenhouse, complete with a cafe and multiple fountains. I was naturally drawn to the small, semi-hidden statute of a hippopotamus. 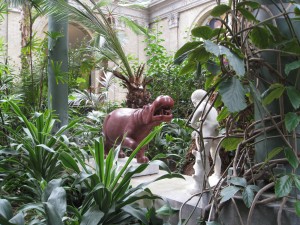 Proceeding from the central garden area, there were several wings to the museum, which had themes from ancient sculpture (Greek, Roman, Egyptian, etc.) to French Impressionists, to Danish Works. It was a little confusing, but every museum I’ve been in thus far, with the exception of the Museum of Danish Resistance, has had a confusing layout. The first portion, the ancient art, was undoubtedly my favorite part of the whole museum. I got to see loads of extremely old sculptures, including several Roman Emperors, a bust of Alexander the Great, Egyptian Hieroglyphics, and even pieces of the Babylon Gate! Several of them you could even touch, which was way cool, I think the oldest thing I touched was about 4500 years old! In the center of the ancient area was the “Great Hall” which was home to statues of a vast array of Roman dignitaries and Gods. I got a picture of me chilling out with Marcus Aurelius, one of my all-time favorite Romans. 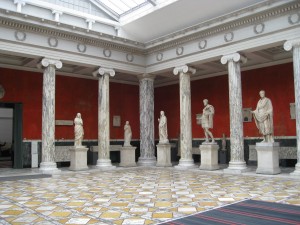 After walking around amongst naked statues, disembodied heads, and all sorts of other pleasant things I proceeded onto the paintings and more modern works of art. There was a lot of really fascinating stuff, especially some of Rodin’s work, but I was still most impressed by the ancient area. The final exhibit was devotedly solely to Danish artists, and while a lot of this was relatively new (past 250 years onwards), there were still some really awesome statues.  My two favorites of this area were “Death and the Maiden” and “The Panther Hunter,” the later seen here. 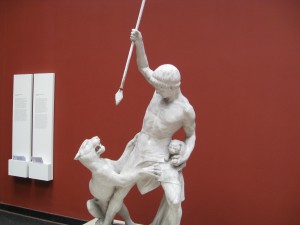 By this time I was especially hungry, so I headed out, having seen every single room in the entire museum, which took about 2.5 hours I would imagine. It was around 3:30 in the afternoon, and here most things start closing around 4 or 5, but mainly 4 on Sunday (if they are even open). So I took off in search of food, and literally every place I found that was still open was catering to tourists, and therefore was crazy expensive. So, I decided to just live with my hunger and start working my way home, as the weather had improved (it was bright and sunny the entire time I was in the museum). I decided to head to the University’s Botanical Gardens, the largest in Denmark since it was free and it was sunny. Well, by the time I got there, which included walking and taking a bus, things had clouded up, got windy, and got cold. Naturally, within 15 seconds of me entering the gardens it started pouring, and I couldn’t even go in the vast greenhouses because they were all closed due to issues with the alarm system. So I found a small open glass shed, and waited for the rain to calm down a bit so I could head home. 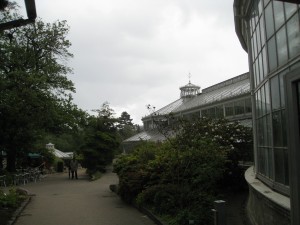 Having resolved myself to return to the Botanical Gardens on a nicer day when I’m not quite so hungry, I boarded the bus, made a quick stop at the store for some milk, then plopped down here. Naturally the sun came back out once I was inside, and has pretty much been out ever since, its one of those frustrating days where it starts to rain the instant you go to do something, then is sunny as soon as you go inside.

Tidbit of the Day: The Danish Flag

Since it works its way into a good amount of my photos, I figured it would be nice to share the story of the Danish flag. Unlike many flags around the world, the Danish flag has a name, its called Dannebrog, and it has its own “mythical story” which is pretty cool.

The legend dates the origin of the flag to the Battle of Lyndanisse, in Estonia (against the Estonians), on June 15, 1219. The battle was going badly for the Danes, and defeat seemed imminent. However a Danish priest on top of a hill overlooking the battle prayed to God, which meant that the Danes moved closer to victory the more he prayed. At a one moment he was so tired in his arms that he dropped them and the Danes then lost the advantage and were moving closer to defeat. He needed two soldiers to keep his hands up and when the Danes were about to win, ‘Dannebrog’ fell from the sky and the King took it, then showed it to the troops and their hearts were filled with courage and the Danes won the battle.  According to the legend the flag, Dannebrog, was given to the Danes from God himself, and from that day forward, it has been the flag of Denmark and the Danish kings.

Christian August Lorentzen painted this iconic event in 1809, the painting below is the original, which I saw in the National Art Museum. The Dannebrog is also the oldest state flag in the world still in use by an independent nation. 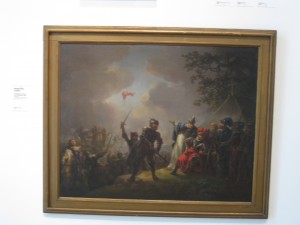