Today I’m going to talk briefly about a trip I took to Boston and NYC.

I say briefly because its something that happened a good bit ago now. Like most people, I tend to forget the finer details pretty quickly. That is the nice thing about blogging actively, rather than retroactively, its easier to remember the details. The one time I tried to retroactively blog about a series of things, I burnt out really fast. I guess there is something very.. not-fun.. about struggling to write something that has sort of faded from the front of your mind. For me at least, its not engaging to write about old stuff.

However, I’m going to make an exception here because I can share a few larger points.

Back in early Spring I took at trip with SB and Meem to New York City and Boston. It wasn’t a traditional trio trip as were actually split up for a fair amount of the time. Basically I was looking at law schools and SB was looking at graduate schools and Meem was contributing aid to both endeavors. This was actually a pretty important trip for me, as it was the final step in a very, very long process of deciding where I was going to go to law school. [I’ll get to the law school process in due time, that is one retroactive post I can do plenty of complaining in.]

However, outside of law school it was an interesting trip namely because I had never been to either NYC or Boston. I say that in the most extreme ways possible too, I hadn’t even been in their airports before. I have to say, I enjoyed both cities, but for very different reasons. I’ll have to add the caveat for NYC purist that the vast, vast majority of my time was spent in Manhattan and even then most of it was midtown or below. So, keep in mind that area is what I’m largely referring to (yes I realize NYC is much more than Manhattan).

NYC seemed a  bit more fast paced than Boston, in both the bad and good ways. Though Boston wasn’t slow by any means, there was definitely something in the air in NYC that Boston did not have (and no I don’t mean pollutants). Boston on the other hand, seemed a bit more cordial, possibly even a bit more “Old World” than NYC did, again, in both the good and bad ways. I can definitely see how individuals come to have fierce loyalties to each city and why they would be attractive places to live. That being said, I do not see myself in either one of them long term. In fact, unless life changes my course (which in all likelihood it shall) I have no intention of living on the East Coast long term.

I hate, hate, hate, and loathe humidity. Anyways, to the post topic. Both cities were fun, each in their own way. To be completely honest, I think NYC surprised me more than Boston, but I was expecting far less of it as well. It wasn’t what I was expecting in a lot of ways, mostly good. However, Boston won the day in some other ways, so its close toss-up either way you look at it. But again, I don’t want to live in either place long term, for more reasons than just humiture.

The trip itself was fun though, if a bit hectic, and the drive back was kind of a pain. I mean it snowed, near white-out conditions in April, ffs. I liked spending time with my peoples though and also sort of sealing that section of the law school process, even if it had its share of topsy-turviness. For closing, here is a picture taken of NYC by SB, I really didn’t get many chances to take photos since I was so busy, so this is the best I can offer. 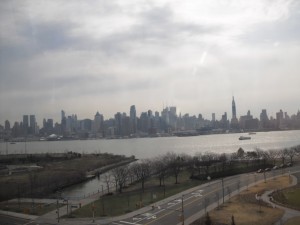