Author’s Note: Depending on when this actually gets posted, this made have happened a long time ago. Tis’ the beauty of being able to save drafts of posts.

Since we are going to be moving soon for graduate school SB and I decided to make a “bucket list” for our current area. One event that we had wanted to go to for at least 3 years or so was the “Taste of Tippecanoe,” shockingly named for the county in which the event takes place. Much like any other “Taste” the food was the main draw, but there was also live music on four different stages as well as fireworks over the river. Now, I like food, but this is actually only the second taste I’ve ever been to in my life. The first was the “Taste of Chicago” which is apparently the grandpappy of all other tastes. 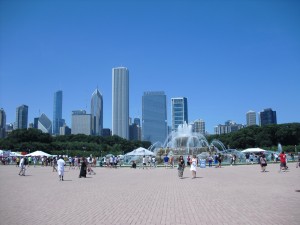 I should not that the Taste of Chicago was way, war more crowded that it appears in the above photo. That spot was actually a bit removed from the center of the event. It was also really hot, but it was a lot of a fun with good food.

Anyways, returning to the Tippecanoe variant. We decided that since this was probably our last chance we should go. The big reservation was cost, ToT was one of those events where you had to pay to get in THEN you could pay more to get tickets to buy food. Since we are on a tight budget this was a bit of a pickle. Fortunately there was an online discount if you purchased your tickets in advance via PayPal, and it wasn’t a small discount either. So we got our tickets and away we went.

Fun thing, literally as we were going to the ToT, it started to rain. Then it started raining more. By the time we parked and go to the gate, two cops sort of just waved us in, not looking too pleased that they were in the rain at a food gate rather than cruising the coastline in a police cruiser while Axel F blarred over the radio. We went in and the ticket stands were all gone. Notice the problem with that? If you aren’t familar with tastes, generally speaking you buy tickets, the stands don’t take cash. You exchange the tickets for noms. Normally the exchange is somewhere around 1 ticket = 1 dollar. So, if you can’t buy tickets, guess what that means.. you can’t buy any food, or drinks, or anything. So we started off our visit by walking around trying to find tickets, turns out they were “closed.” Yes, they closed the festival. We ended up getting 3 tickets for free from the scattered gate people, which we used to get a BBQ sandwich from Mr. Darryl’s Southern BBQ (which was supposed to be 4 tickets, but they were disassembling their tent and didn’t care).

After that, we waited in the overhang of a bank with a lot of other people. Then we waited some more, then some more, and finally some more. At this point in time, frustrated conversations could be heard all around. Apparently they had sent out texts saying the ToT was “closed” which people understandably thought meant “over.” Nope, someone thought “closed” was a good way of saying “closed until the rain stops.” So, when those cops let us in, it was actually closed and we shouldn’t have gotten in. More on that in a second. So, from our bank haven, the festival which normally draws about 40,000 looked like this: 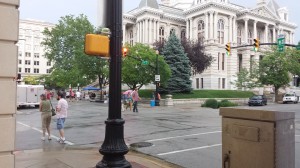 In the words of one of my close friends “Having Fun” (said in the most sarcastic way possible).

Well, the saying goes good things come to those who wait and true to form, that is what happened. As the rain cleared a bit things started to come back to life and tents were rebuilt that had just been taken down 15 minutes prior. Then the ticket booths opened up and Huzzah! they could actually take our money! Within a short while, desolation had turned to this: 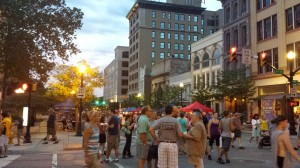 So things definitely turned around. But lets back up for a moment first, there was still a bit of bad to be had. Remember how I said the cops weren’t supposed to have actually let us in? So, one area of the ToT was a “Beer Garden” which was a little island of amazingness where none of the millions of unattended tweens could enter. It was the typical order of events, show your ID, get a wristband, done deal. Well, in the process of getting our “Over 21 Bands” the gate attendant asked why we didn’t have ToT Bands. Um, what? Apparently when you enter, you are supposed to hand over your ticket and you get purple bands in turn (the 21 bands were green). This never happened to us, because we actually entered the taste when it was closed. So we had to wait, and some woman came who was in charge of the gates. We just had to have the purple bands, so we had to followed her 2.5 blocks BACK to the place were JUST WERE. Not so bad right? A thing to keep in mind with me is that I have splitting pain, anywhere in the range from a 3 on good days to a 9 on really bad days, every single time I take a step. So, 2.5 blocks worth of pain to get something that I really didn’t need since I had proof of payment. To make things better, she wasn’t in any hurry, she stopped to chat, make phone calls, you name it. Between SB and I, I tend to be the angry not level headed one, but even she was getting annoyed.

Long story short, we got the stupid band and go some good food and good drinks. The ToT had “Taster” specials which were small portions of dishes from the various vendors, all these, even the beer were 1 ticket. We visited the following places:

Mr. Darry’s Southern BBQ (Previously mentioned) – Nom’d a Pulled Pork Sandwich, very good, if basic.
Khana Khazan Indian Grill – Nom’d a “Tandoon Chicken” was good, small portion, but good.
L-Kora – Nom’d a “Flauta” was good, but they were slow due to a big line.
Emergency Munchie Truck – Nom’d a “Mac Nugget Popper” which was a mac n’ cheese take on Jalapeno poppers, very good and very quick, they had a cool iPad based ordering system.
People’s Brewing Company – Nom’d one of their Browns and a Pale Ale, sadly can’t remember the exact names.
Thr3e Wise Men Brewery – Nom’d a Rocky Ripple Pale Ale, a Bulldog Brown, and some Blackberry Ale. All of which were good, I think I prefered them to People’s.
La Scala – Nom’d Tiramisu, we got the “Taster” which was actually a fairly good portion, even for 2 people, I love Tiramisu so it was good.
McCord Candies – Nom’d a bag of gummy frogs during the Fireworks, were good.
Easley Winery – Nom’d some Raggae Wine, I don’t know much other than it was good and I’m not a wine person.

There were a few other places we wanted to try, such as Adelino’s who left during the rain (as did several others) as well as Ben’s Pretzels who had no food left (they were indefinitely “making more” it seemed). Still, as you can see, we got to try A LOT of stuff for far, far less than it would cost to visit those places individually.

Around 10:30ish we decided to head out to the pedestrian bridge over the river to watch the fireworks. Most of the crowd was gathering at the middle of the bridge but we stayed close to one end. Turns out our spot was pretty much perfect, since we ended up straight in front of where they were launching the fireworks. Right before they started it began to rain again, but the fireworks people gave zero cares. The fireworks worked just fine too, makes me wonder why so many places pu-naner out of fireworks when it drizzles. It was actually a really good show, not super long, but it had a great grand finale. I managed to get a video of it by keeping the phone under the umbrella. Turned it on at pretty much the perfect time. I uploaded it to the web to ensure the best compatibility for anyone else who might view it. I decreased the size and quality a fair amount to make it quicker, but it doesn’t really matter that much since its exploding stuff.

So all in all, I’m glad we went, especially considering it was our last change. But, I’m not sure I’d go again if there was even a chance of rain. There was A LOT of miscommunication on the part of the organizers and “stranding” people and vendors with no ability to exchange tickets was kind of ridiculous. The beer was good though, very good. 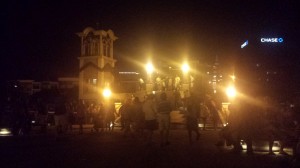 Above photo is waiting for the fireworks to start on the bridge, with the omnipresent Chase God floating in the background.