I’ve decided that rather than just meander through a bunch of stuff that I have billions of pictures of, since the pictures will remind me of the event, that I’m going to focus on a few interesting tidbits that I have observed, been part of, etc. since arriving. There’s no point in writing posts I don’t find interesting, so I’ll be changing my game-plan a bit (however I am still somewhat working forward to the present, which is June 6th – 9:57, with annoying Turkish people talking outside my window).

Copenhagen is Big
True, its not a mega city, but compared to flippin’ Bloomfield I might as well have stumbled onto an entirely new planet. 1.9 million people is what I was told, I haven’t bothered to verify that, as its still freaking a lot of people. Coupled with the fact that I don’t speak but a few words (i.e. Hello, Excuse me, Sorry, Goodbye, English?), its made for an interesting first foray into a European metropolis for me.

Disorientation and lack of language aside, living in a city has additional drawbacks. Firstly, all cities have a dark side, Copenhagen is no exception. There is graffiti EVERYWHERE, like.. for real, these graffiti artists much jump out of planes and spray paint things as they plummet to the Earth, many of the locations don’t seem physically possible, yet they’ve managed. It is also a little dirty, but cleaner than Indianapolis I think. There’s no smell though. The noise can be difficult, especially when it NEVER stops, but I suppose such is the city life!

Not all is bad though, for instance, having access to SO MUCH STUFF, is pretty cool. And the public transit system is really awesome, even though Central Station is a recipe for getting swarmed by beggars. Additionally, because the city is so new, I see something I’ve never seen before in my life every day. The Danes themselves are pretty laid back, I’ve only really been bothered by the beggars.. come to think of it, they are the only ones who’ve bothered me. I’ve been made fun of a few times for doing things that were abundantly tourist (holding up an ENTIRE train for instance), but nothing major. Thus far, they seem to be much more reserved and capable of minding their own business than the people I’m used to in America. Because of this, and the city itself, I have not felt unsafe once. That is not to say that I am throwing caution to the wind in this large city, but that I feel more safe here than I would in Indianapolis for instance.

Since I want to keep these posts relatively short, else I will NEVER return, I’m going to stop there.

For a photogenic ending, here is a shot of a cannon at the Kastellet, an old (massive!) earth-work fort that used to defend the Copenhagen harbor. 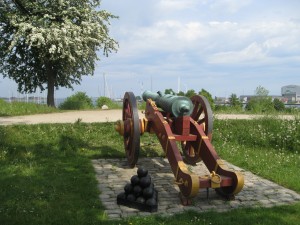