..well, not “technically” the first Thanksgiving. That was in 1621.. or sometime around in there, no one really knows. However this was SB and I’s first Thanksgiving by ourselves. Sure, we’ve lived away from “home” for awhile now, but we always managed to make it back to visit with the famiru. But now that we are 1 million miles away, that is not really an option. So what better a way to start your own Thanksgiving traditions! We decided to do just that. I wouldn’t say our traditions were especially original though as they involved: Lots of food, a big dead bird, football, and beer. Of course its more about the experience than the details and thus we had an awesome “First” Thanksgiving.

We actually started planning our meal a good while back. Remember Savenor’s? We knew for awhile that we were going to get a chickum from there. We opted out of the turkey simply because turkeys tend to be huge and we did not need 15lbs+ of animal flesh. We ended up going with a 3.74lb chickum from a local farm, it was amazing. We also picked up some knockwurst while we where there. Sure its floor-sweepings, but it was local floor sweepings.

The rest of our goods came from either Wholefoods or Peapod. The nice thing about Peapod is that the day before Thanksgiving it was sleeting, yet SB and I were brought 192$ worth of groceries right to our front door. Win.

So what were we working with? Well, the photo below shows the “before” – which is all the ingredients we planned to use that day (Tristen & Valentino not included) 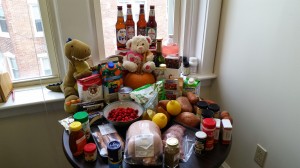 I’m not going to list everything, if you have questions just ask!

We actually got started right before the first football game of the day (there were three) so we had to prepare the snack plate to provide fuel to cook the other food. 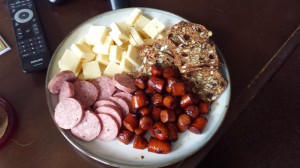 Pepperjack cheese, summer sausage, knockwurst (cooked with magical secret ingredients), and these AMAZING pumpkin-flax-raisin-lots-of-stuff crackers from whole foods. It was an awesome snack plate. As you can see there was a lot of it, we are still snacking over 24 hours later.

The Cowboys were playing later in the afternoon (4:30) and Meem and Daryl 1 were actually attending the game, so we were wanting to get things done in time for that. Things went fairly smoothly over all: we got the pumpkin cleaned (though sadly we burned the seeds when baking them, but they still ended up moderately tasty) then chopped up and baking, sweet potatoes cleaned and baking, chicken nice and seasoned, etc. However, for whatever reason our sweet potatoes decided to take 17 years to cook. That pushed things around a bit but we ended up adjusting for it. Our sweet potato casserole ended up pretty awesome! 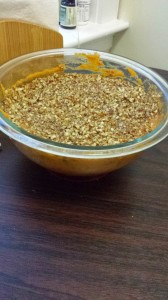 When it was all said and done, we actually ended up finishing all the preparations just in time to eat and then watch the Cowboys game! (They lost, but still) 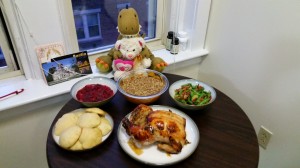 It was an awesome dinner! Everything turned out really well. Some of it didn’t end up looking like we might have anticipated (rolls) but the flavors were excellent all around! The chickum was especially nomz.

After dinner had set for a bit, I got started on our pumpkin-spice-pecan pie. Yes, pumpkin, spice, and pecan. I was actually winging the recipe for the most part, so I was worried there was too much spice and not enough other stuff. However, it actually turned out really good and was quite hearty for a pie, without being sickeningly sweet. 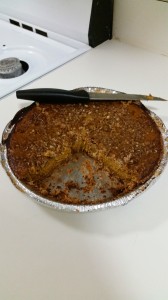 We were so anxious to eat it that I didn’t take a photo in time, haha. After the pie it was big cleanup time, but we tag-teamed it fairly well and before too long the kitchen was looking better than it had in some time. Of course, the winding down time also meant that it was time to bust out the beer. I had planned on starting the beer earlier in the day, but a fat belly and a lot of cooking postponed that. It was worth the wait though, since it was a holiday I decided to treat myself to some decent beer. Particularly some Harpoon. If you remember the last Harpoon sampler pack I went with, I loved it. Since the weather has gotten colder outside, I went with the aptly titled “Snowed in Collection” 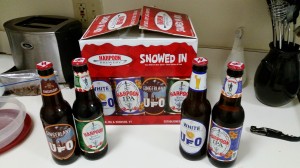 For starters, I’ve already mentioned the IPA, it was good, one of the better IPAs in my opinion. I’ve also already mentioned the UFO White. So I’m going to focus on the Winter Warmer and the Gingerland UFO. To be honest, it was the Gingerland that immediately drew me to this pack, but I’ll start with the Winter Warmer. This is a very interesting Winter Warmer. Warmers are generally over 6% ABV, however this one clocks in at only 5.5%, so its a bit on the lower end of things. Warmers are made to well.. warm. So they beef up the stoutness and the alcohol to make you nice and toasty when its all but toasty outside. This Warmer is an entirely different take on the variety. It gives up the stoutness for a more mild, almost lager-like flavor. It shuns the high ABV for lots of spices. I mean, sure, lots of Warmers claim to be spiced, but this one is like a spice explosion in your mouth. You’ll notice that Beer Advocate hates this beer. I’m going to raise my pinky and kick Beer Advocate in the balls on this one. This is an awesome take on a traditional winter warmer. If you go in expecting some middle of the road no frills warmer like Sam Adam’s (which isn’t bad, but its not unique either) then you’ll probably not like it. But I thought it was really cool, it was more of a spiced beer than a standard warmer. Next up was the Gingerland. Now, if you are not me, the idea of a “Gingerbread Inspired” beer probably leaves you iffy at best. But you’re not me (unless you are, hi me). I was enthralled by the concept. Sadly, it didn’t live up to its potential in my book. Its like they placed too much emphasis on the ginger and not enough emphasis on the bread. Now, for the ginger portion they nailed it. But I don’t think its fair to say “Gingerbread Inspired” then have no real hints of gingerbread at all. That being said, it was a good, interesting beer. Had they just called it “Ginger Beer” I’d be like “all hellz yiss dis is sum gud beerz” but since they said “Gingerbread” I have to hang my head a bit.

Despite the Gingerbread UFO not living up to my extraordinarily high expectations, I’d say that once again, this is a VERY solid sampler pack. I think Harpoon Brewery may well be on its way to becoming my favorite brewery. And no, they have not paid me to say that, though I’d be happy to talk endorsements.

The next day was Black Friday. I don’t do Black Friday, at least not in the traditional “Lets kill each other the day after being thankful” sort of way. I generally don’t even go out, at all. This year we did got out for a bit though, but only down to the square, I’m not a fan of malls on the best of days. We started with some lunch (we decided to skip our Friday night out in favor of leftovers) at a place called Flat Patties. SB actually found it. When we got there we found that they had “combined” with a place called Felipe’s Taqueria. Felipe’s is usually a few doors up, but their location was under construction so I guess they decided to be bestest-frandz with Patties and live in the same tiny restaurant. We came for sammiches, so we didn’t go with Felipe’s (and Mexican the day after Thanksgiving would cause me to poo out my intestines). I managed to find us a table upstairs, which was fortunate since it was quite packed. Not only was it Black Friday, but it was also two restaurants with the size of only one, which is not much anyways in Cambridge. SB went with a fish sandwich and I went with a chicken salad. 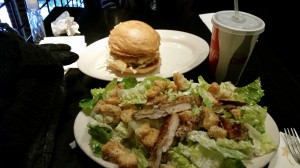 It was pretty good, nothing super stand-out, but the day after Thanksgiving food has kind of lost its luster. After we finished eating we did some shopping before heading to Starbucks to take advantage of a coupon SB had (she tried the new Chesnut Praline Latte and I went with my classic Peppermint Mocha). We started home then remembered we were wanting to get some Reddi-wip for our pie. Tristen also had an odd desire to spray it up his nose. We ended up finding some at CVS of all places and then we were on our way. 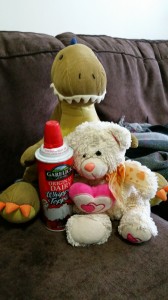 Once we were home I started on my own Christmas lists, completing all three of them in one sitting (score me). Now we’re just chilling for the rest of the evening, oh and of course eating leftovers, lots of leftovers.