“We are here to drink beer. We are here to laugh at the odds and live our lives so well that Death will tremble to take us.”
~Charles Bukoski
__________


Well, after about 5 months of not updating the beer list I decided that it was time to just let it go. The original concept can be found in the list’s Introductory Post, but I now find myself with no specific reason to maintain it. It’s not because I don’t drink beer anymore, it’s just that this magical little application called Untappd came along and pretty much obliterated my desire to painstakingly update the list manually. On Untappd I can simply check in and the app takes care of the all the storage details, whereas The Beer List required manually typing and linking every single beer in alphabetical order by brewery. While seeing the list grow was fun, taking the time to properly maintain it was not. I can now simply type (or just scan the UPC) of a given beer and see if I’ve had it before – as well as see my ranking out of 5 points + photo + review of the beer. It’s much faster than a massive WordPress blog list and individual Beer Blurbs. This is not to say that the Beer Blurbs are gone for good, but simply that The Beer List is now retired. It had a good run and it served its purpose well until technology got the best of it. I’ll still retain the list in an archive – frozen in time on July 26th, 2016 – because it provides a backlog that predates Untappd (though the list is still missing several years itself). I’ll also leave this page up as a testament to a time when I spent a decent chunk of time each week updating and organizing my list. These days I let my phone do the heavy lifting while I do the heavy drinking. 🙂

Should I decide to return to a more manually-controlled list in the future, then you can rest assured that it will resume its place on this page. Until then, I’ll be on Untappd, exploring all sorts of magical brews! Further, as a way of keeping the “spirit” of The Beer List alive, I’ll keep a snapshot of my ongoing Untappd stats at the top of this page!

“Come tarry here and welcome be, and quaff the foaming brew; a friendly smile, a word, a song will cheer the heart of you!”
~German Drinking Song 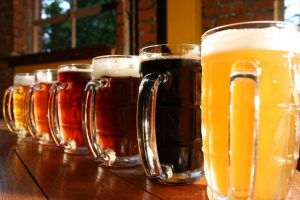