I’ve made it fairly clear by now that I don’t like retroactively posting about specific events. However, I’m going to do it again because this particular event was a lot of fun. So, with substantial abridgement, I present my Seattle trip.

A little background first. SB and I had wanted to go to Seattle for awhile. One, we just wanted to see it. There is a lot about the city that seemed appealing to us. Second, are strongly considering moving to the west coast eventually and this served as a first scouting mission. Though we were taking notes of the things we did and did not like for possible moving purposes, the overall goal was to have fun before we left for graduate school. Thankfully, we managed to achieve that goal quite easily.

Our adventure started here (Thanks to SB’s Dad for getting us there): 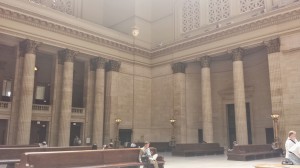 Probably not exactly what you were expecting, Union Station in Chicago I mean. Well, rather than flying out to Seattle we decided to go via train. This wasn’t some supremely long or thought out fulfillment of a life’s dream or anything. It was originally born of trying to do things as cheaply as possible. We quickly found out that somewhere along the line trains stopped being so cheap in the United States. Of course there were also buses, but yeah, no. So, for awhile the train plan was actually nixed, but we ended up coming back to it obviously. We even went so far as to get our own room on the train. Now, I use the word “room” very liberally in this regard. Our “Roomette” (As Amtrak calls it) was more of a closet with convertible chair beds in it. That being said, we loved it and definitely recommend to anyone traveling via train. Plus, it comes with meals and the meals were actually really good. Plus, having your own little area with an attendant and free coffee and water, not to mention not having to share a window, made the trip all the better.

What I trip it was, it actually takes two days to get out there, thanks largely in part to how poor our rail network is (oh the irony there). A lot of the delay is caused by sharing rails with cargo trains, which can literally cause delays of up to 10+ hours. This actually happened to us in North Dakota (more like 6 hours) but we ended up making the time up and arriving in Seattle pretty much when we were supposed to, despite the prior schedule being all jacked to Hades.

Long story made short, we both enjoyed the train as a whole and we got to see a lot of very cool stuff, from flat to swamp to mountain, with cities in between. Tristen, Valentino, and Clifford also enjoyed the ride quite a bit. 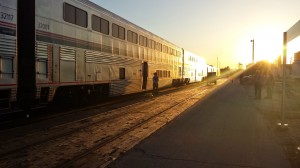 So, cutting out the majority of the train ride for post length purposes, we found ourselves in Seattle. 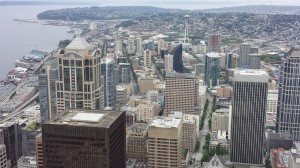 This view was not from the train, no poorly made Back to the Future Part 3 plot devices here. It was actually from the observation deck at the Columbia Center. It gives a nice view of the downtown area and of course the Space Needle. Oddly enough, this period of grey was essentially the only time it wasn’t sunny on our entire trip. Except for when we got back home, then it rained, but never in Seattle. The weather as a whole was pretty much perfect. Which means I immediately proceeded to get sunburned. Fortunately, my sunburn really didn’t get much worse than the itchy phase. Though I did forget my regular deodorant at home and so I started having allergic reactions to my deodorant as well, for more itchy fun. [Interesting note about me: I am allergic to deodorant, even the “natural” kinds, so I use what is literally a block of sea salt, and have for years. Works very well].

Once had our initials impressions (Dang Seattle is hilly!) We did pretty much everything we sat out to do during our trip, such as the Pike Place Market, Columbia Center, Bainbridge Island, the Theo Chocolate Factory, an underground tour, Mt. Rainier, the Bill & Melinda Gates Foundation, plus a few extras and surprises (such as a “dancing” fountain at the Seattle Center – where the World’s Fair was held in 1962). We also got out of the “main” areas of the city to see some businesses such as Adobe and Google. We also visited the University of Washington and even did some canoeing in the Puget Sound. [Seen below is a channel in the sound, rather than the sound itself, but hey its a pretty picture from the canoe]. 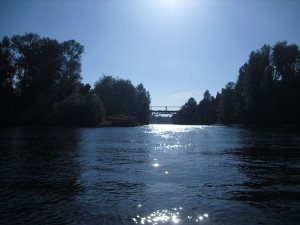 We also got out to see both the Fremont Troll and the Boeing Museum of Flight, both of which were free to us since we inadvertently timed our trip around the museum’s “Free Thursday” at the beginning of each month. The troll is always free, always awesome, always watching.. and is much bigger in person that what it seems like in photos. Since plenty of photos of the troll itself exist elsewhere, he is a photo looking out, from behind the top of its head. 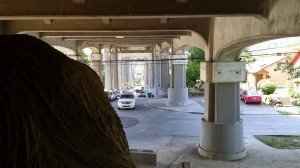 While doing all of this stuff, our base of operations was the Moore Hotel. A very old and historic hotel attached to a very old and historic theater. Plus, both of them are apparently quite haunted. We may or may not have had a minor incident one night, but I’m still not entirely sure whether it happened or I dreamed it. I’d highly recommend the Moore Hotel and since I make zero money at all on this blog, you can rest assured that I’m being candid. Plus, there was a pigeon who came to our window and told us of his people. We fed him a goldfish cracker.

In addition to the city itself and Bainbridge island, we also made it out to Mt. Rainier. Interestingly enough, right before we visited a group of hikers had been killed while climbing the mountain. It was actually the worst loss of life on the mountain in some time. While this is a downer in and of itself, I did think it was kind of weird how it paralleled my trip to Mt. McKinley back in 2006. Right before I got to that mountain, there had been another climbing party killed there. Kind of odd, maybe I am cosmically drawn to mountains where people have recently died. Who knows.

Anyways, macabre stuff aside, the trip to Rainier was a lot of fun. We even go to go snow-shoeing! It was very odd, we were covered in snow, but it was still very hot to do all that physical activity. It was a weird feeling, unlike anything I’ve felt before. I was actually in shorts (and not cold at all, mind you, despite having snow on my legs) and ended up with quite the sunburn on my calves from the snow’s reflection. Can’t say I’ve ever had that happen before. Here is a shot we took on the way up to the mountain. Keep in mind, we were obviously no where even near the top. Us regular people only go so far up as the last working toilet, sort of like McKinley (though we were much closer to Rainier than I was to McKinley). 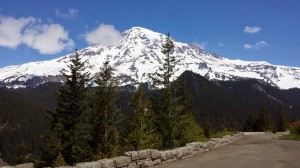 So, I’m noticing that my word count is quickly escalating, so I’m going to start wrapping things up before I burn out. In all, we definitely liked Seattle, though the extremely nice weather was something of a giant lie, since apparently it rains a lot. The biggest drawback seemed to be the large number of homeless people, but even this was concentrated in certain areas. The positives definitely outweighed the negatives though. Is it someplace I am going to just run out to live in? No idea, not at that point in my life yet. However, the scouting mission was definitely a success, plus they have way better internet, an obvious draw for yours truly. I do have a very odd feeling that I’ll be back, no idea if that is a long term back or another visit, we’ll just have to see what happens. In the meantime, I’ll be (literally) across the country. Seattle did have good beer though, I was kind of surprised by how large their microbrewery scene was.

As a parting shot, here is an photo taken from Kerry Park, in the Queen Anne neighborhood of Seattle. This park turns out all sorts of iconic pictures of the city and since the weather was so nice, we were treated to a nice photo opportunity as well. We did have to walk up a huge hill to get to it though, so our reward was not granted without effort (SB wanted to cheat and take the bus, I vetoed that plan). Below that, is a similar show to the one from Columbia Center above, except this time at dusk. 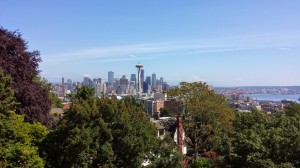 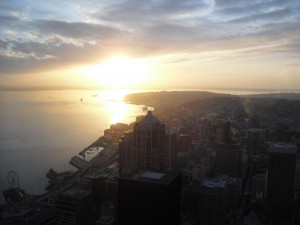