Greetings and welcome to Dinosaur Bear,

As made evident by the title, this is a direct follow-up to Part I and so we’re going to pick up right where we left off! As for Dino #1 and Dino #2 they’ve mostly kept their size and shape. They did atrophy a little bit but nothing too crazy. Here’s a photo them shortly after the last photo and before they shrunk a bit. 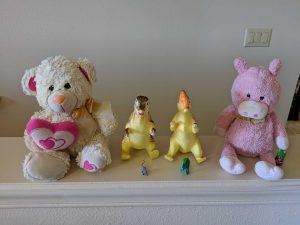 The little alligator next to Pig was a gift from one of the Boys’ friends in Indonesia!

During Tristen’s absence the Boys took it upon themselves to relish most of the things that Tristen holds dominion over – namely “his” (it’s all of theirs) race car. 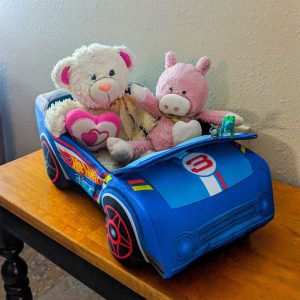 They really went for it and even took it on some off-road adventures. 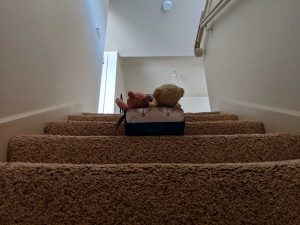 We all missed Tristen, of course, but that didn’t stop us from keeping the Dinosaur Bear party going. There’s been pizza and bread-sticks in Tristen’s absence, and I am sure there will be hell to pay once he realizes this. 😛 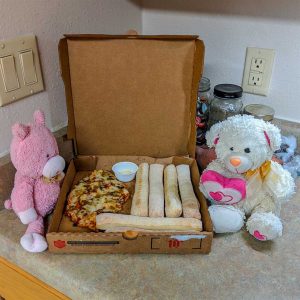 Of course Tristen also somehow managed to arrange over $200 in pizza deliveries to his box while it was in transit, so we don’t feel too guilty. In order to pass the time we’ve not only had our usual Friday treats, but we’ve also played a few new videos games such as Spider-Man! 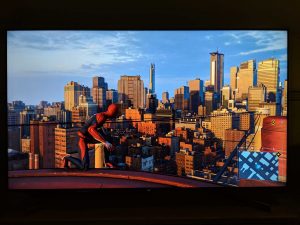 There may have even been a few late night rounds of tea and chocolate in there as well. 😉 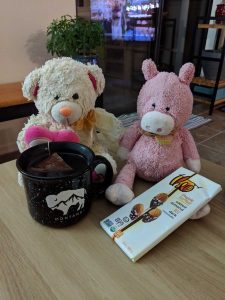 Aside from having fun in Tristen’s absence we have continued to be productive – it’s not all been laziness and pizza. For one the Barley Bros got a major makeover. 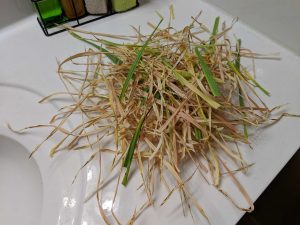 Yes, all of that came from our two barley plants and all of it from a single grooming session. Afterward they looked to be in tip-top shape. 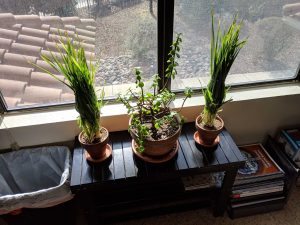 Of course plants have a mind of their own and so the Barley Bros are getting pretty raggedy again and are once more encroaching all up into Bonsai Buddy Jr.’s space. 🙂 Pig tends to keep Bonsai Buddy Jr.’s area pretty clean though. I’m not sure if that’s because Pig values Bonsai trees or because he is looking for an excuse to eat the other plants back a bit. 😛 Knowing Pig it’s a bit of both, as he does value Bonsai Buddy Jr.’s more spiritual side and often does yoga next to him. Speaking of Yoga, we’ve been continuing our Sunday family yoga sessions. 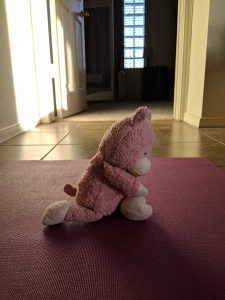 A new staple of our Sundays is also some of the yummy smoothies that SB makes us (Valentino is a big fan)! 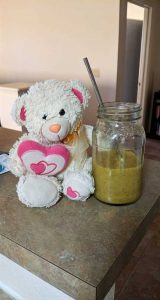 We all really enjoy the family healthy time, but since we’ve continued following along with the Chakra-themed chocolates there’s been a little something extra special to look forward to at the end! 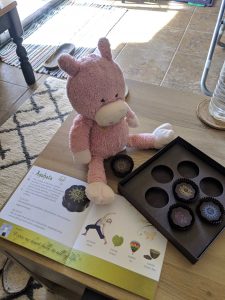 And, true to his self, Pig also follows up his chocolate with more yoga! 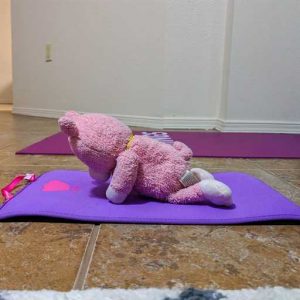 Of course as of the day I am writing this (2/5/19) it’s the Year of the Pig in the Chinese Zodiac so Pig is generally in a pretty good mood and has all sorts of excuses for more yoga time. But, despite being the Year of the Pig and despite all the activities the Boys have been up to, this is, after all, a post about Tristen.

Yes, if Tristen had his way this post would have been titled “Return of the King” rather than “Tristen goes to the Hospital (again) – Part II” but this is my blog despite all Tristen’s statements to the contrary. 😛 If it wasn’t already obvious our “golden child” has returned to us from his hospital in California. If you paid attention to the dates then you may have noticed that he made his voyage a bit quicker than we expected. In fact he was a good deal quicker this time around than he was last time which was nice. When this gets posted Tristen will have been home with us for 11 days and I am sure in the meantime he will have been very busy reestablishing his (self-perceived) dominance over the Taco household.

But, let’s backtrack for a second. As Tristen’s transit adventures tend to make us nervous, SB and I (and Grandma Reem) had been watching Tristen’s return progress. Ever the one for grand entrances, Tristen decided to return to us on Friday to ensure that he didn’t miss any further Friday night festivities. I was on a call with another attorney when I got a message from both USPS and Meem that Tristen had arrived. So I cut the call short (really, lol) and went to find Tristen. He wasn’t outside so I knew he was over at the main office – because he is too good to just wait outside of course. So I headed over and picked him up from the property manager.

Once I got him home I carefully opened the box and found this: 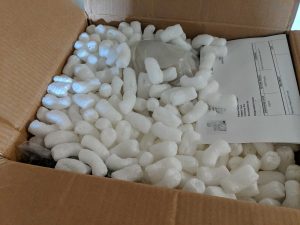 Yes, not content to just have some air bubble padding like what we sent him in, Tristen had requested an entire box full of packing peanuts. Even as I began delicately trying (and failing) to not get peanuts all over the floor I heard Tristen alternating between saying “Res” and laughing down inside the box. I briefly considered sending him back and then determined that letting Tristen loose into the wilds was probably not a good idea. 😛

Anyways, his deviousness aside, Tristen was very happy to get out of his box and see me and his brothers. 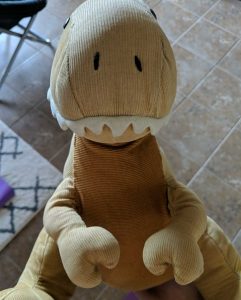 We had seen some post-operation photos from his doctor, but this was my first time seeing the ole’ boy up close and personal and I was very impressed with the results! Here is a photo of Tristen in all his newfound glory (pre-operation photos here). 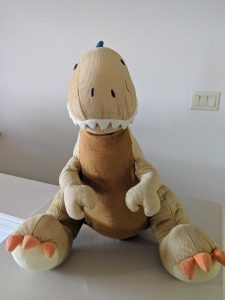 And here’s a shot of the back – notice his patched up tail! 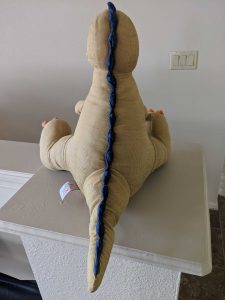 You’ll have also probably noticed that his entire chest-plate is a new color! That was by design and not something that was unexpected so no malpractice here. 🙂 We learned that since Tristen’s skin is corduroy the color options which are widely available in that fabric tend to be darker in color (based on when corduroy is traditionally worn). The hospital only had a few corduroy options in their stock, one of which was sort of a pale beige and the other of which was a dark gold. We could have waited for them to source some corduroy which was closer to his original chest-plate (and which can still be seen on the pads of his feet) but that would add an unknown amount of time to his stay, so we opted – after much deliberation – to go with the dark gold. I’m glad we made that choice as we (and Tristen) are really happy with it! Further, as made evident by the above photos we decided not to replace his feet pads at this point because while one of them is kind of worn, they weren’t worn enough yet that we felt the need to replace them. For his part Tristen seems to thoroughly enjoy his new color palette – especially the gold, which he believes to be quite “manries.”

For most of the afternoon after his arrival Tristen just hung out with his brothers on the couch and they had a private party I wasn’t invited to. 😛 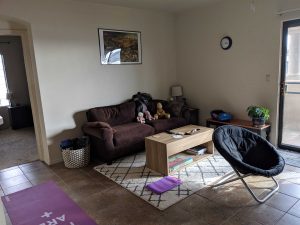 However when SB came home with McAlister’s Tristen opened up the VIP-only area to us because he wasn’t about to pass up some delicious food, Adventure Time, and cake! 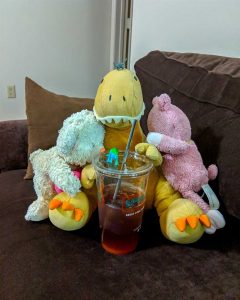 The next day (Saturday) Tristen got the seat of honor in Felicia when he and SB took her to the car wash. The front seat is the most coveted position during errands and the front seat during car wash days is even more desirable. 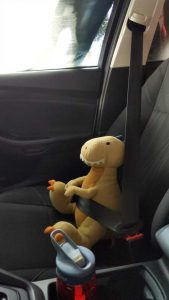 The King and his Gold.

At some point while they were out Tristen also convinced SB to let him pick out a new bottle of scotch. Our last bottle (Johnny Walker Black) was getting kind of low, so Tristen wanted more. He came home with Glendiffich 12 which is on our self-curated scotch list, but I also think Tristen picked it because it’s green and has a buck on it. 😛 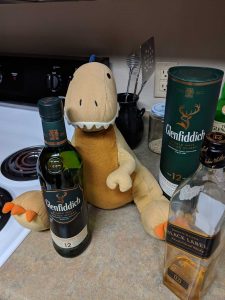 So, as you can tell, Tristen quickly adjusted back to his normal life here in the Taco household. His personality – already large by any standards – has only grown with his newfound gold armor. That said, we are very happy to have him back as things just aren’t the same without our resident T-Rex rapscallion.

And there you have it, Tristen’s second (and honestly probably not last) hospital adventure was a complete success. He’s all nice and repaired and his ego is healthier than ever. We were really surprised by how quick the turnaround was this time, but Tristen is not one to accept much of anything less than perfection. 🙂