It’s been a bit since last time, so as usual there’s been a lot happening around the ole’ Taco household since then. As such I feel like we have some catching up to do! I’ll be doing that very thing via a series of “Spring Blurbs” posts where I briefly(ish) recap some of the adventure and silliness we’ve been up to. Right now I have three such posts planned, but that number isn’t set in stone. With that said, let’s get started!

First up, spring has bought with it sand, a lot of sand. 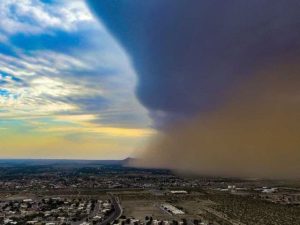 This is not my photo – but it is where I live and that’s what happened.

We’ve never lived someplace with sandstorms before and I can’t say it’s something super fun and exciting. Of course we also had a small amount of late snow to go with our sand – something which made Valentino quite happy. 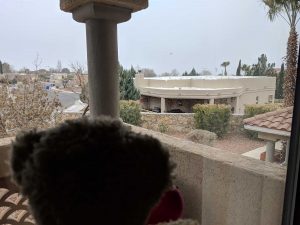 Mixed in between the sand and the snow has been some cloudy days with a bit of rain – not that the cacti seem to mind very much. 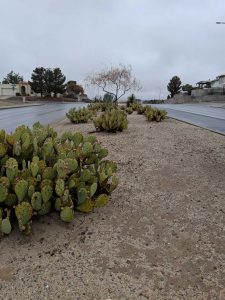 Though on the whole we’ve definitely had more sand than snow or rain. On the plus side sunsets with sandstorms can be pretty in their own special way. 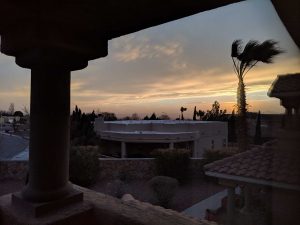 But, we still are fortunate to deal more with sunny days than we do with cloudy ones – though the spring days have been very windy (even on the sunny days), thus the sandstorms. Lawrence hasn’t been too pleased with the wind as it tends to blow away his acorns, but he has still managed to continue amassing his collection regardless. 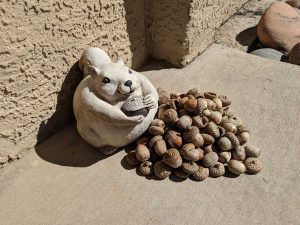 It’s actually much bigger now than it was when that picture was taken.

He isn’t the only one hording things though, as yours truly recently went through yet another round of beer bottle cap organization. The big bunch toward the top of the photo are all unique caps, not a single repeated cap. The pile below is being processed, while the bag with Xs on it is duplicates. 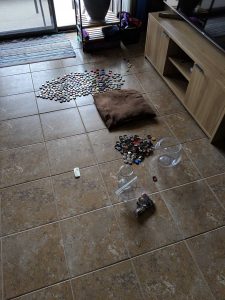 Spring also brought with it jolly ole’ Saint Patrick’s Day, which not only reminded us of Ireland, but also allowed us to expand on our waffle tradition by making them (sort of) green. 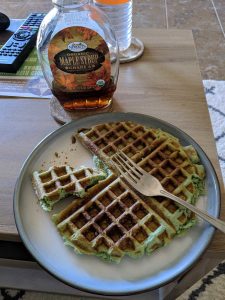 There was, of course, also green beer – both of which were Irish, but we didn’t even try to color the Guinness as that would have been a waste of coloring. 😛 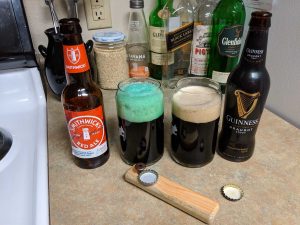 One big surprise was the arrival of my own handmade guitar! This was the “mystery box” from the end of the last post and I’ve now been given clearance to reveal the contents. 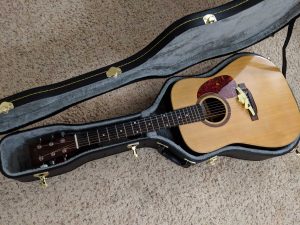 My grandfather used to make instruments and I had wanted one for a long time. I thought one was getting made for me, but then sort of forgot about it as that was many moons ago – however, as soon as the big box showed up I had an idea what it was! The reason for the initial secrecy was because Daryl 1 was also getting one, so I had to hold off until his surprise was also revealed (since, you know, anything posted on Dinosaur Bear gets read and disseminated by millions of people). Of course I have no idea how to play a guitar and aside from ensuring it was in a good shape (after the case had somehow locked itself mid-transit) I haven’t done much with it, but now I have a guitar to learn with should I choose to!

But back to the topic of spring, it does come much earlier here. Little flower blooms started popping up during the time period where I’m still used to seeing snow on the ground. 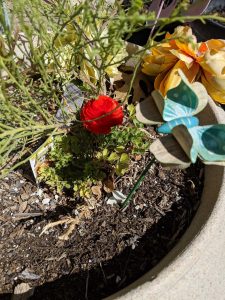 Plus the trees really started turning green early (that little tree on the left is now much greener than it was when that photo was taken). 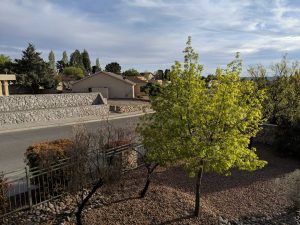 With the awoken trees have come reinvigorated bird friends. We have some quails that live near us that bring us great joy (and are friends with Felicia) and another pair of smaller birdies has built a nest in a tree near us. I love having little baby bird cheeps outside, so I’m excited about that. The one thing that has been a problem with that is that one of the birdies is stealing our window screen for the nest. 😀 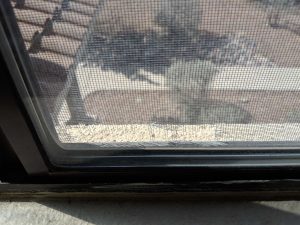 I had to end up taping a big chunk of the screen as they really worked on it while we were traveling (that trip will be covered next post) but I’ve since scared them away enough that they seem to have given up on our screen and are instead “eating” a big hole in our neighbor’s screen, lol. Either way, it looks like they recently finished the nest, so here’s hoping for some baby birds soon!

Another thing that was finished here was SB and I’s long run of Adventure Time. 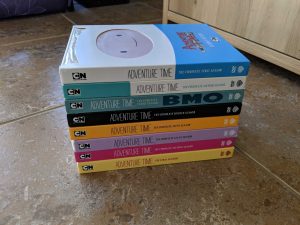 We’ve been watching the series since 2013 (the series itself started in 2010) and so it feels kind of weird to not have it there to watch anymore. SB and I really liked the series and I really can’t recommend it enough. I might write more about it at some point, but for the purposes of this post I just wanted to share that we’d completed it and also to post our stack of DVDs as that is the only series will still purchased physical media for.

Switching gears to the “manly” beverage of choice for Tristen: scotch. 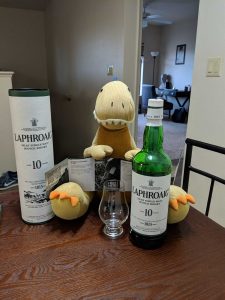 Tristen and I have continued our scotch exploration – to mostly positive results. The scotch above, Laphroaig 10, was our first really peaty scotch (described by some as “drinking a campfire”) but it also made us landed gentry. Yes, Tristen and I now own land in on the Isle of Islay, Scotland. Sure, it’s only one square foot, but it’s still land. Bow before us you peasants. Aside from the Laphoraig 10, we’ve been working through quite a variety of bottles. This is my most recent line-up, listed with the first one I tried on the left, and newest on the right. 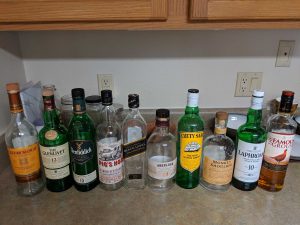 I realized after writing the draft for the post that this photo is actually missing my newest addition: The Balvenie 12, as that was acquired after this picture was taken. So here’s a photo of that as well. 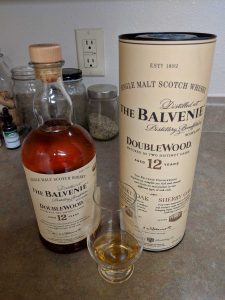 An intellectual scotch-drinking “manries” man needs some good literature, so I’ve also started working my way through Inferno (or as I usually hear it referred, “Dante’s Inferno”). I had quickly read the first part (Inferno) of Comedia when I was younger, but I only read the base poem with no commentary and plus I was younger and more stupid. So now I’m re-reading it along with commentary and with a more finely tuned eye. 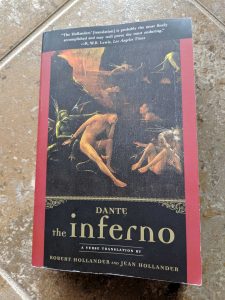 I’ll try share more thoughts on it once I’ve completed it, but so far I’m very much enjoying the read.

Finally, to close out the post, I’d be remiss if I didn’t also mention the fact that spring brought us Pig’s 4th birthday! Yes, our quintessential “spring baby” – Pig turned 4 this year. We started off his birthday with some incense overload, and I do mean overload. 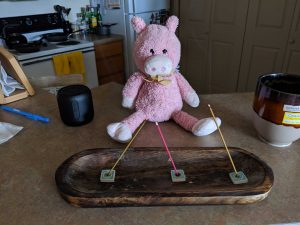 Looking at Pig’s face I can’t help but wonder if that isn’t a “special” kind of incense.

Later we had some McAllister’s (a birthday classic for us!) and Pig’s most-favorite dessert in the world: dirt pudding! 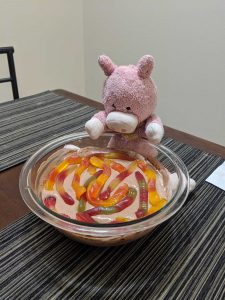 We ended his day with some Buddha beer, and I do mean Buddha beer – as in the bottle was Buddha. 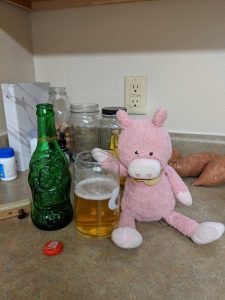 While the beer itself was just average, the bottle was right up Pig’s alley and he seemed to really enjoy it (and since it’s Pig, he was also happy to share it – unlike some denizens of the Taco household 😛 ).

Anyways, that’s all I have for the first of these Spring Blurbs. Be sure to look for at least two more blurbs – these a bit more focused on adventure! – in the coming weeks.