Today started pretty uneventfully, I slept in until I could sleep no more, which is the first time I have done such without an alarm waking me up in about three weeks. While that was nice and all, I got pretty bored just sitting around my room. It was the typical situation, I had looked forward to not running around, but once I stopped running around I wanted something to do. The good news is that the 90% chance of rain for today was undeniably wrong, and in fact the weather was quite pleasant and mostly sunny. So around 2:30 I decided to head out into town to try to find a bakery, because I wanted something sweet. Well, every bakery I found was closed for the day already, so I ended up just walking around the city center. I decided to walk along Strøget, which is a long pedestrian street, the longest in Europe in fact. I have been on Strøget multiple times before, as it is pretty impossible not to find yourself on it when you are walking around downtown, it tends to intersect just about every major street. Strøget has tons and tons of shops, and tons and tons more people, so during a nice day like today it can be pretty cramped. As I had not yet walked the entire length of Strøget, I decided that I would do so today, hoping I would find a bakery in the process. Well, about.. 30 seconds into my walk I found.. 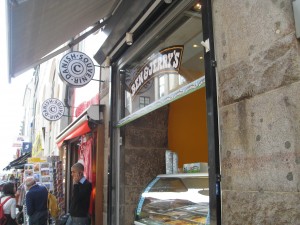 Now, I love me some Ben & Jerry’s, but I have never, ever been to an actual Ben & Jerry’s shop. So, after some intense debating, mostly over cost (you think its expensive in the states? HA), I went for it. I tried “Baked Alaska” which I had read about, but never seen in a store back home, it was pretty good. So I had my first ever freshly scooped Ben & Jerry ice cream, I just had to travel to Denmark to find it. After sitting in the sun at once of the squares listening to the street performer music while enjoy my ice cream, I head off down Strøget again, straight into a massive wall of people. Long story short, I made it from one end to the other, but this is pretty much what the entire stretch of street looks like: 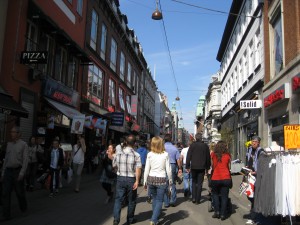 Its mainly for shopping and food, all of which very expensive since its right in the middle of the city. I primarily enjoy the street performers, which vary from musicians, to people doing all sorts of oddball stuff, be it eating fire, or pretending to be statues. They always seem to have a fair amount of coins in their buckets when I pass by, so they must do fairly well, though some probably do better than others, as many didn’t really some to have much talent beyond sitting there with a cup. After growing tired of the crowds on Strøget, I headed off onto side streets, I left the map in my backpack and decided to just walk, though I was never really lost as I do pretty well with directions at this point. I came to the round tower, which is actually home to Europe’s oldest planetarium. It cost money to go to the top, but I figured I would go ahead and do it, since it was less than 5$. Right as I was about to go up, and entire group of string-instrument players came out onto the street and did a performance, which was really cool. I’m not sure what it was about, or why they had been in the tower, but it was still really neat. The tower was much easier to climb than the church spire, as almost the entire way up (save for that one crazy spiral staircase at the very top) was a ramp. It was built that way because the king wanted to be able to ride a horse and carriage to the top, oh the pompous days of yesteryear. The view wasn’t as good as the church, as it wasn’t nearly as high, but as it was situated right in the middle of the old medieval part of Copenhagen, you could really take in just how winding and gnarled the streets are. 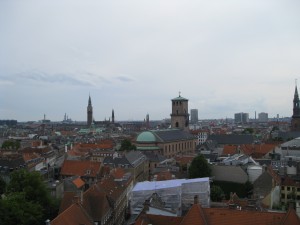 Once I descended, I was swarmed by beggars, as they tend to gather around the popular attractions in downtown. My usual tactic of being somewhat aggressive, and speaking German, worked as well as it always does and they gave up. I have no idea how I will get rid of them in Germany, maybe I will pretend to speak Danish. My feet were pretty tired at this point, so I hopped on a bus and headed home, ending a relatively pleasant, if not expensive day. I quickly dropped in the Fakta to grab a thing of juice, as it sounded good and I all I’ve really had is beer and water. It turned into.. an experience, so on that note:

The Tidbit of the Day: Shopping (When you know none of the language)


While I outlined in another post how I somewhat enjoyed not speaking a language when out and about in the city, shopping is quite difficult. I really have to “sight shop” because things are not as easy to decipher as you might guess. For instance, I have been eating what I believe to be turkey breast lunch meat, it could be chopped up donkey for all I know. I often times Google what I’ve purchased so that I can learn, but when I’m at the store, there’s no such help as most employees at the discount stores don’t speak any English. Things like pasta and pasta sauce are easy to purchase, though much more difficult to determine what specific “kind” you have. Bread is surprisingly difficult, so I’ve just reverted to buying cheap loaves of white bread (which existed in two varieties, aesthetically identical, but one costs 50% more than the other, same brand, no idea). But all in all, I have done well finding the off brands, and the good deals, though it requires a lot of time and guess work. However, today, I had my first real mess up, and that was with the juice. The last time I was in Fakta, I saw this juice called “Fun One,” I was immediately drawn to the English. So I went in today and purchased it, came home, put it in the refrigerator while I was cooking pasta, then opened it up and took a big drink. And then I spewed it out. Turns out, it is not juice, but rather a syrupy juice paste concentrate. This one bottle is designed to make like 10 liters of drink, yes 10 liters. I took a big huge gulp of like 15 glasses of pineapple juice at once. Needless to say, I don’t want to eat pineapple for awhile. No where on the bottle did it mention this little bit of information. Here is a picture of it, next to a bottle of water where I placed like 1 teaspoon of the concentrate into. You get the picture. 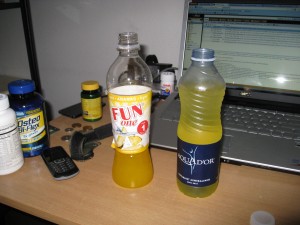