So here is a funny story. I’ve had a folder on my computer desktop called “Blizzard 15” for quite some time now. Pretty much ever since all the snow started in January. However, as time marched on and the snow kept on a fallin’ the name of the folder changed. Eventually it became “Blizzard – January, February, March, & April – 15.” It just didn’t seem like winter was going to give up. However, Spring is Springing, and I am hoping that the snow we had on April 8th is going to be our last for the year. *knock on wood* 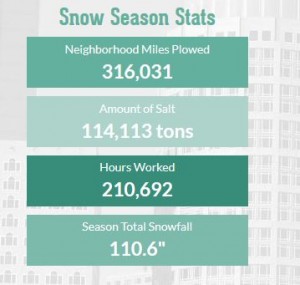 To be fair, things haven’t really been bad for a bit now. The “Big Melt” that happened as the several feet of snow began to melt was pretty nasty, and there’s been a few snow storms since, but by and large we have been working towards happier places as far as the weather is concerned. Sure, its still been colder than normal for this time of the year, but I’m trying to be positive. Either way, I’m thinking that its probably finally safe to make my “Spring” post that I’ve been waiting for, I guess you could say its time to take out the winter trash. 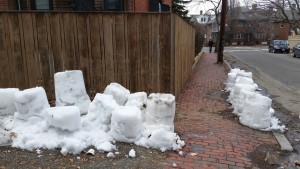 Literally. I guess someone hadn’t moved their trashcans in awhile. But, for now, we’ll bid winter and its 110.6″ of snow adieu, courtesy of the man himself (with his own light dusting). 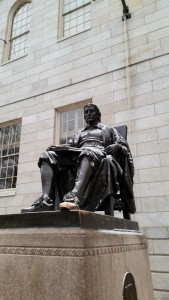 Now that we are in Spring mode, that means its Easter time! I talked a little bit about it in my last post, but didn’t post a picture of our actual Easter basket. 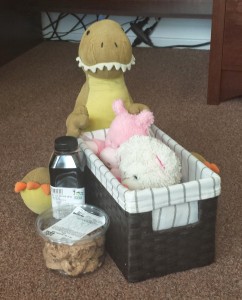 We tend to we re-purpose whatever basket is handy, this time one of SB’s wicker ones. The Easter Bunny brought us a thing of oatmeal cookies and cold brew coffee from Whole Foods! It was a yummy day.

Spring also means that its time to change-up the beer selection to celebrate the (slightly) warmer weather! I went with two Spring-themed brews recently. 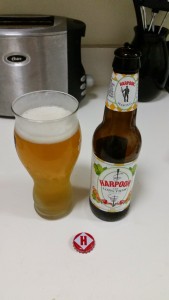 Previously I mentioned that I wasn’t really aware of “colored” IPAs. So after having the red IPA from Aeronaut I had to try more varities. Conveniently the first one I found, a white, was also a Spring beer! The aptly titled “Long Thaw” is yet another solid offering from Harpoon, which as I’ve mentioned before, is a brewery that you just really have to try. I think the brewer’s note on this beer sums it up nicely: “Spring” in New England is a fickle friend. So we brewed a beer that could carry us through the January cold while hinting at warmer days ahead. With notes of orange peel and coriander, the soft mouthfeel of a Belgian wit, and an intense hop profile, The Long Thaw White IPA combines the warming backbone of an IPA with citrus notes indicative of the coming spring. “Spring” in New England may be indecisive, but we can help make one decision a little easier. 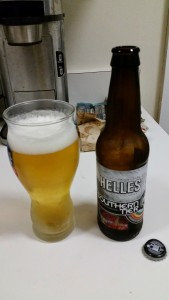 Next up was “Where the Helles Summer?” which was from a newcomer (to me) Southern Tier Brewery, from New York. It had been a good bit since I had had a Helles. In fact the last time I had one was probably a Hoppin’ Helles, whenever that was. In case you weren’t aware, Helles, literally translated, is German for “Light” or “Bright.” They are at their core a Pale Lager, made in response to the Pilsner. Helles are traditionally a crisp and light beer, with a relatively low ABV (4.6% in this case) to make them good warm weather beers. For my first Helles in awhile, I definitely approved of this one, plus with a name like “Where the Helles Summer?” is kind of hard not to enjoy yourself while drinking it. I’ll have to look for some more Southern Tier options in the future.

In more law-school oriented news, my oral argument for LRW is tomorrow night. I should be preparing for it but instead I’m writing this blog post. I call it “Productive Procrastination,” which is really just an excuse. I know that I alluded that I’d be bitching about LRW, but I’m going to keep it Brief (huehuehue) this time around. Basically in about 20 hours I will entirely done with the graded portion of LRW. Sure, I still have one more class on the 20th, but for all intents and purposes the class will be over tomorrow evening. I have not prepared as much as I need to. My practice oral argument last Monday went well, but the real deal is about 3x as long and it well, actually matters. So, if you’ve grown tired of me complaining about LRW, just hold out a little bit longer, and then we can both enjoy me moving on to complain about other things.

On Tuesday, I have a presentation due in my Rhetoric course, and while I’m not as nervous about it, it is 20% of my entire grade, and thus is no laughing matter. My point is that its really going to be very busy until about 7:30pm on Tuesday. After which I will officially enter that period of about 1.5 weeks where I just sail along until exam Hell begins. Sure, I still have one more project due with my journal, but its the smallest of the three I signed on for. Once exams come around, well, that’s for another post. 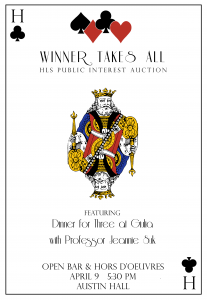 If you couldn’t tell, they were using a casino/gambling theme this year. (The photo-booth was like a flash-back to high school) 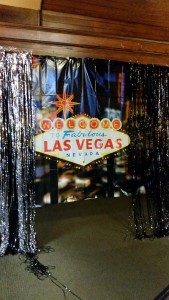 Last year was nautically themed I think. Anyways, if you have an awesome memory for mundane details, you might recall that I worked 3 hours on a Saturday awhile back for the auction. As I said in that post, the HLS Public Interest Auction is held each year to assist in generating money for those of us who don’t want to go to a firm for their first summer (or those who did, and were unable to do so). Since my required hours were long past, I got to just sit back and enjoy the auction. And by enjoy, I mean eat the food and take advantage of the open bar. 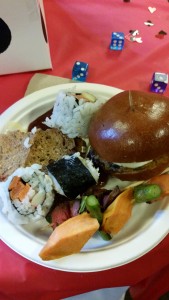 That is a whole lot of awesome packed onto one little plate. I went through four beers on top of the food. Gotta love the freebies. SB even came up from BC to partake in the fun. She almost missed the food, mainly just getting what little was left, but there was still plenty of alcohol to go around. 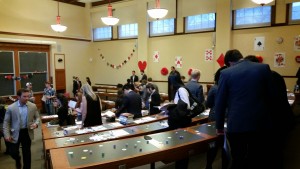 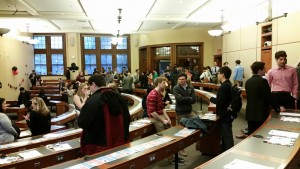 Each room sort of had a “theme” for the items, be they services (Spa Day), electronics (Amazon Kindle Fire), trips (Ski Trip in Vermont), or any myriad of things in between. I didn’t bid on anything, because I have no money. But a lot of the items were really cool, and the starting bids on the vast majority of the items were extremely reasonable (though I have no idea what they ended at).

The real show however, was the live auction which started at 7pm. The live auction hosted most of the “Big Ticket” items and the auctioneers were none other than Mr. Awesome-sauce Jonathan Zittrain and then Susan Farbstein, who was grossly overshadowed by Zittrain. 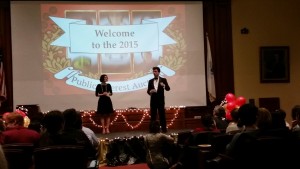 The live auction was a blast. Both the format, auctioneers, and guests all combined to make for a lot of fun. It was especially fun to see some of the professors in an environment where they didn’t have a stick up their ass. 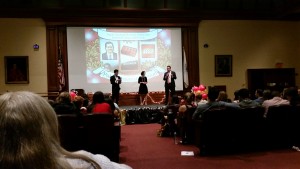 The “items” being auctioned were greatly varied, including tennis matches with professors, dinners, Cape Cod timeshares, and, as pictured above, a trip to the Legoland Discovery Center with a professor and his two kids. They even included a video of the kids asking you to bid, talk about an appeal to emotion. I don’t remember how much the Legoland item generated, but I think it was something like 1250$.

There was also a trip to view the “Big Bang Theory,” complete with a VIP backstage tour to meet the cast and also a chance to sit in Sheldon’s spot. 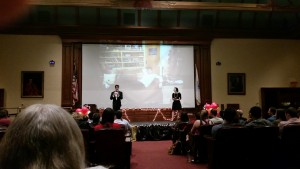 That trip was actually being offered by Zittrain himself, who can be seen in the aforementioned spot on the screen behind the stage.

The final offering was a champagne reception at Professor Mann’s Cambridge “mansion” after graduation. 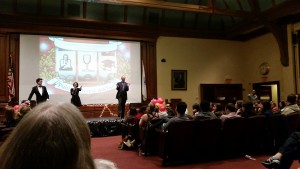 This one got pretty heated between two groups of 3Ls in the audience. Bidding ended at 4200$ which made it the largest single bid of the night, and it was a lot of fun to watch.  However, the largest overall bid was actually for a dinner with Professor Suk (my criminal law professor) which generated 6000$. There were three bidders, and Zittrain proposed that they each stick with the 2000$ current bid, and all go together, which everyone accepted. It was pretty awesome, especially because some of all this money goes to me.

I do have to give a shout-out to an unnamed dude who was roaming the audience driving bids up. 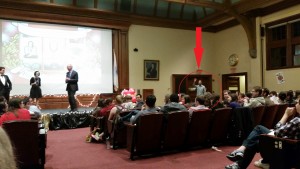 SB and I have no idea who this guy was. Early in the auction I thought he was with one group of people since he was talking with them, trying to get them to bid. But then I noticed that he was appearing everywhere that someone was considering a bid war. At once point he was close enough to us that we could hear him egging people on to bid, classic social pressure. He was actually pretty freaking hilarious. He was like that little Devil that sits on your shoulder in cartoons, except all the bids were for a good cause (only Public Interest people get the money). By the end of the auction we were wondering if he even went to Harvard, he might have been some random dude who just came in to drink booze and make people bid more, either way he did his part to help raise money.

Overall the auction was a lot of fun, the only slow part was three back-to-back performances by Scales of Justice, which got a bit boring. But the food was great, the auction was great, and it raised a crap-ton of money. I still haven’t heard how much it raised, but between the silent auction, live auction, and all the private donations I can only imagine how much they raked in.

But, its now time for me to stop procrastinating, or more realistically, to go start procrastinating on something else. I have a fellowship application to complete, an oral argument to prepare for, and a presentation to keep practicing, in addition to all the usual week-to-week stuff. There is also a journal project in there somewhere, but since I don’t know when that is yet I’m going to pretend it doesn’t exist.

P.S. – Here is a boid friend (who was very hard to get a photo of!) that SB and I had a good conversation with while having some coffee on the patio at The Biscuit! Yay Spring! 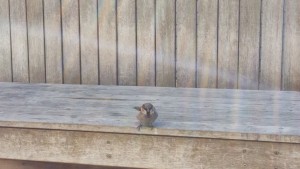