I woke up this morning in the most lovely of ways, no, it wasn’t the trio of trucks, as they had apparently decided to not menace me today. No, instead of the trucks I woke up with not one, but two exceptionally bad cramps in my left calf. The first one I woke up just in time for it to be too late to stop it, the second time I woke up after the pain had already started. After that I gave up trying to sleep.

Its cold, grey, and raining here, but that doesn’t really matter too much as I really don’t have too much to do today (other than a group meeting at 10:30pm, yes pure genius, I was outvoted). The past couple of days have been pretty good though, mainly because I feel like I’m actually starting to get better. On Friday I decided to watch Schindler’s List with someone from the Holocaust and Genocide class because I had never seen it. It was as good as I had always heard it to be. While watching the movie I got some tea and a small bag of cookies, only to open the bag of cookies to find they had been crushed into unrecognizable dust and spewed all over me when I opened the package. The silver lining of the situation was that I took the remaining dust home and put it in a cup, then poured milk over it, which was a nice change from cornflakes. My cheap umbrella, which I have now woefully mentioned multiple times broke yet again, this time the top piece snapped off, allowing water to leak in. But still, Friday was a pretty good day because I was feeling better, I had cookie dust, and I got to watch a good movie. The day even ended with a few hours of sunshine.

Yesterday, Saturday, was completely awesome. It started off raining, which seems to be the order of business here, but not even that could really kill my demeanor. First off, I was feeling probably about 70%, so the best I had all week. Second, I was going back to Humlebæk to see my Danish family as part of the Midsummer celebration. I went up a couple of hours early so that Lene could take me to the apparently world famous Louisiana modern art museum. For the record, its not named after anything to do with the US state, apparently the guy who originally built it (Alexander Brun) had three wives, all of which were named Louise, so thats pretty self explanatory. I’m not a big modern art person, but because of my family’s membership, I was able to get in for free, saving 95 DKK (15$). Some of the exhibits were, as I have become used to, not all that special to me, but others were really cool. The landscape of the museum was also very nice, often times exceeding the exhibits in my personal opinion. It was located right above the coast, so Sweden was visible in the distance. 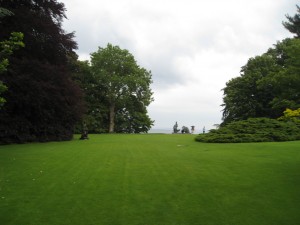 Of the interior exhibits, I had three that were probably my favorites. The best by far was a room of hanging lights, titled something along the lines of “Glimmering Souls.” It was simply concept, paint the floor of a room black, fill with about 4″ of water, build walls and ceiling out of mirrors, hang tons of lights. The effect was absolutely awesome though, I have some pictures and videos, though looking at them you really don’t get the atmosphere. Here is one of the photos I took within the room, it gives you a general idea of what was going on. 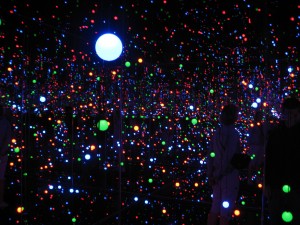 Its actually a very small room, so the effect is somewhat obvious, even in a 2D picture. My second favorite exhibit was a car that had been.. “squashed” I guess you could say. It had been building from the ground up to look like it had been smashed over into a comical bend. It was pretty neat, and to be honest it messed with my brain a little bit, because that pr imitative monkey area of my mind kept wanting the car to be straight, but it just wouldn’t straighten out no matter how much I wanted it to. The third exhibit, was pretty simple, but I liked it, the picture is self explanatory. 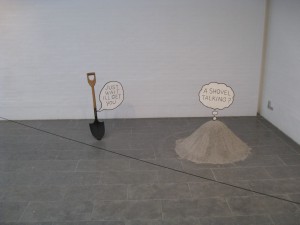 After leaving the museum, the sun started to peak out from behind the clouds and the rain ebbed away. This was pretty much perfect timing because we were heading back to my visiting family’s community barbeque as part of the Midsummer Celebration. My Danish family lives in a type of cooperative housing, similar to the kind that existed in the US in the 70s. Everyone has their own home, but the small neighborhood has a common house, and common areas. Families take turns cooking for the community, cleaning, etc. It sounds weird, and its not something I would personally care much for, but its definitely a system with its benefits. For instance, Arne and Lene may only have to cook 1 time per month, but the other 29/30 days they are made home-cooked meals. The kids can all play together in the community children’s room, there’s also a room in the basement for the musicians to practice together. You kind of get the picture, you have your own house, but its very communal (i.e. historical) type living. Anyways, this community has a celebration every year for Midsummer, just like everyplace else in Denmark. Some of the staples are a lot of food, a lot of beer, and a bonfire.

Arne was one of the main barbeque people, as each family brought their own meat but the salads and greens were shared with all. While we were waiting on dinner to be ready, we went back to the house, where I had some fresh garden cherries. They were seriously the best cherries I have ever had in my entire life, so good in fact that I believe they deserve their own picture. 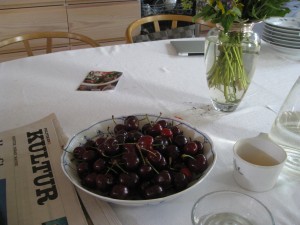 Once dinner was ready, we carried our stuff (including some also amazing homemade apple cider) down to the community house. When we got there the meat was just getting ready to be moved inside, and some people must have been pretty hungry because they were picking pieces of the grill. I guess some things transcend cultural boundaries.I snapped a quick picture of my plate before the meat came, after the meat came in I was too focused on eating to care much about pictures anymore. 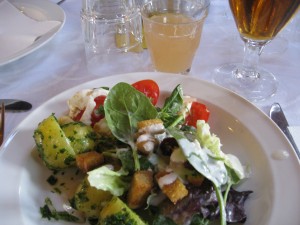 After dinner was over, we had dessert, which consisted of freshly grown Strawberries (which apparently grow very well in Denmark, they sure tasted good), and homemade ice cream, the Danes love their ice cream. 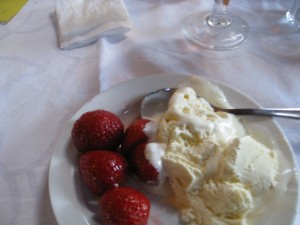 After finishing dessert, and what had to have been my fifth pint of Tuborg, everyone started migrating out towards the bonfire. I would rank their fireside celebration as one of the coolest things that I’ve ever had a chance to experience. Everyone gathered around the fire, which included its own “witch” and sang traditional Danish songs. Thankfully books were distributed which had the lyrics, but they were in Danish so obviously I couldn’t understand, but I could still attempt to follow along and sing things that sounded vaguely like words. The kegs followed the group out to the fire, so even more beer was consumed, it was crazy how much the group went through. I stopped pretty quickly once I realized I was having a hard time balancing, it is very true that the beer is stronger here, very true indeed. The fire lasted for a good while, in fact it was still going when we headed back to the house so that I could catch the 11:16pm train for Copenhagen. The picture below was the fire shortly after it started, people were still heading out to the field infact. 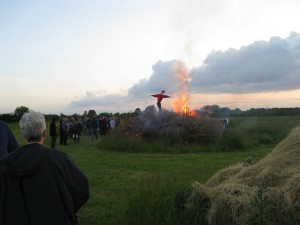 After getting back to the house we said our goodbyes and it was off to the train station. The night train was surprisingly packed, people were sitting on the floor even. My guess is that a lot of people from the countryside were going into Copenhagen for a wild night of partying due to the Midsummer Celebration. I am not positive if I will see my Danish family again, but we are going to try to work something out where they come down to Copenhagen for a few beers before we leave. I definitely hope that it works out!

As I sat on the train, then the bus, then finally made it home, It started to hit me that I’ll never be the same person again after experiences like these. I’ve been able to be a part of things that some people don’t even know exist. It was a really cool feeling, or maybe it was just all that beer 😛

Ok, so I’ve referenced the Midsummer Celebration multiple times now, including this mysterious burning of a witch on a huge fire. So what’s the deal? Well, I’ll explain. In many areas of the world, the summer solstice is still a big deal, its kind of like the massive summer celebration. In America the 4th of July has kind of nomed up all the fanfare for this time of year, but in Denmark the 4th of July obviously doesn’t matter too much. The historical reasoning behind Sankt Hans aften, or Saint John’s Eve, involves the medieval period, as this (June 23rd) was the day that medicine men and women would gather herbs, spices, and general medical supplies for the coming year. The day was actual an official state holiday until the 1700s, but as its been celebrated since the Viking times, no one cares whether its official or not. The bonfire portion deals with light, warding away evil spirits, and all those other summery things. The timbers are slowly gathered all year, the more gnarled the better, as you are supposed to be replicating the great herbal hunt of yesteryear. The drinking, well its Denmark, you need no reason to drink. Now the witch on the fire is a little more interesting, this stems from the medieval witch trials. Basically, as we now know, the Church burned you alive willy-nilly for basically anything. The act of burning a “witch” on the fire has a twofold use. One, its a reminder to the atrocities of the past, a sort of ironic memorial to all the witches burnt. Second, it also acts to remove any bad luck, bad vibes, whatever you want to call it from the community. As the witch burns, she is sent to Bloksbjerg, a mountainous region in Germany where the souls of witches are thought to gather to this day. Why they send the witches to Germany, I am not sure. These are old traditions, they don’t always make sense. Songs are also sung around the fire, a lot of songs, but the primarily song is a midsommervise (Midsummer Hymn) called “Vi elsker vort land…” (We Love Our Country), which is kind of like any other song talking about how awesome your country is. So there you go, a brief overview of the Midsummer Celebration in Denmark (its also big in Sweden, you can often see the fires across the channel). 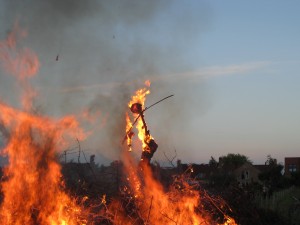 AND.. with that, I’ll be gone for awhile. Tomorrow I have to be at the airport at 9:30am, as our flight leaves for Edinburgh, Scotland at 12:05pm. I’ll be gone until Friday night, so I’m not sure when I’ll have a post up, but there will be one.