As things begin to calm down a bit for my 1st class, I’ve been left with no home work for the first time since day 1. This is due to our teacher being (ironically) in the U.S. for a conference now, and also because the final exam is on Thursday. As such, we just have movies and guest lecturers on Tuesday (today) and Wednesday. Today we watched a film called “The Whistle Blower” which is about corruption in the U.N. and based 100% on a real story, it made me rage. After class was over, since it was really sunny for the first time in over a week (yay!) I decided to go walk about the city. A fellow DIS student hadn’t been down to the Kastellet area yet, so I decided to take her there, as its a little off the beaten path as far as bus routes go. It was a really nice day to be out, except there was a cruise ship parked right next to the park, thus ruining many good views of the harbor. The plus side was that St. Alban’s Church, which had been closed last time I was there, was now open! Needless to say I snuck inside to grab a few photos, and was immediately surprised by the vast amount of English in the church. I later found out the church is Anglican. 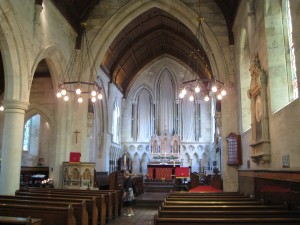 After revisiting the area, which was nice because I saw things I missed the first time, we decided to hoof it over the Statens Museum for Kunst (The National Art Museum) because neither of us had been there. The museum was comprised of all sorts of art, ranging from classical paintings to ultra-modern stuff, such as an extremely odd exhibit about death, that had children as its target audience. I’m no art connoisseur, so I guess you could say I miss the niceties of most art museums, but the weird factor kept me pretty entertained here, especially because the museum was free. The highlights for me personally were seeing a Picasso, The Death of Socrates, a painting by Peter Bruegel the Elder (Likely my all time favorite painter), and a lot of really awesome bronze statues. I thought this was one of the more humorous pieces in their modern collection: 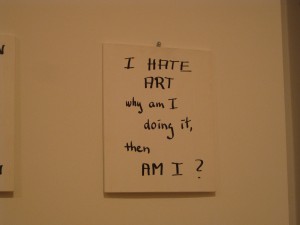 After our trip to the art museum we headed home, as we had been walking continuously for about 5 hours at that point. We actually timed it really well as we left the museum about 20 minutes before closing, then the bus showed up at the bus stop after about 45 seconds of waiting. The sun had retreated behind the clouds by this point, and I was super hungry, so I was ready to be home. I ended up doing my grocery shopping, and since I was really low, I ended up spending over 100 Kroner on a single trip (which isn’t as horrendous as it might sound).

Tomorrow I’ll be heading to the National Museum (sans art), which is a massive museum in downtime Copenhagen, so I’m sure I’ll have something to say about that as well. Which brings us to the..

Tidbit of the Day: 7-Eleven

Ok, so when I say “7-Eleven” images of really cheap, kind of run down places with shady people sitting in the parking lot 24/7 probably come to mind. Well, 7-Eleven has made the trek to Denmark, and has changed a lot in the process. First of all, they are much cleaner, though the people behind the registers are about the same. Beyond that, 7-Elevens are the most expensive quick-mart here, a stark contrast to the U.S. In fact, a 7-Eleven is more expensive than an upper-tier market such as Irma. They also have tons of stuff you’d never find at a 7-Eleven in the U.S., such as a larger alcohol selection that most U.S. liquor stores. I’ve yet to buy anything in them, after my Danish Family Dad, Arne, told me how insanely expensive they are compared to anything else. 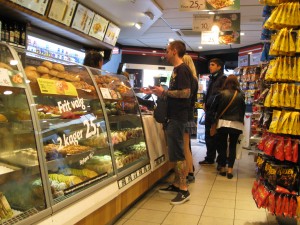