Remember when I mentioned that we were going to adopt a Puffin? Yeah, didn’t think so – but on the off chance you did remember, then you’ll recall that I promised an entire post about puffins, yup.

So we adopted a puffin, and it was a glorious occasion. Of course I have to say that we didn’t adopt in sense of bringing one into our home as sadly that would probably be illegal, but rather we adopted it in the sense that you adopt those small children from Africa by sending money to the Christian people on TV – minus the small children, Africa, or Christian part. As my empathy for humans is below average I instead chose to send my money to Cereal People and adopt a puffin. Further, I didn’t really send money per se, I sent in UPCs from 20 cereal boxes, old-school style.

Of course this probably brings three things to mind: What is a Puffin? Who are these Cereal People? Where do these Puffins come from?

Gather round and ole’ Taco will explain.

What is a Puffin?

A puffin is an extremely cool kind of bird that shits all over the place. 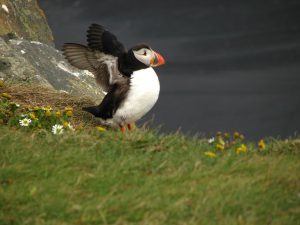 In science-speak, they are “alcids” from the genus Fratercula and there are three kinds of subspecies of puffins, the Atlantic puffin, the Horned puffin, and the Tufted puffin. Puffins have a fairly large range, which encompasses everything from New England, to Nova Scotia, to Greenland, to Iceland, to Ireland, to the UK, to Norway, to even Russia. 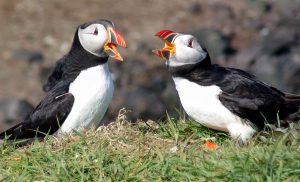 The puffin that we adopted is an Atlantic puffin, and those are the puffins that you probably had in mind when you thought of puffins. Also, a baby puffin is called a “Puffling” and they are also awesome. 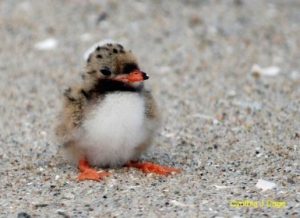 Confirmed for better than human babies.

And yes, puffins are quite capable of flying – though SB didn’t know that. 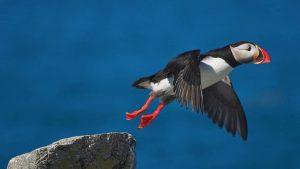 So that is a nutshell version of what puffins are.

The Cereal People are in actuality a company named Barbaras, which offers “wholesome cereals and snacks.” One of their products is their “Puffins” cereal line, seen below in New Mexico. 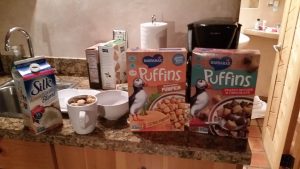 Originally I was drawn to Puffins because of the fact that they have a puffin on the box. Later I was drawn to Puffins because we are trying to cut out high sugar cereals (so basically like 90% of cereals) and Puffins are low in sugar compared to most Murkan’ cereals. Then, Puffins became a staple when we learned about a program Barbara’s runs called “Adopt-A-Puffin” which allows you to send in 20 UPCs and adopt a puffin from Maine!

Where do the Puffins Come From?

The puffins (the bird, not the cereal) come from Maine’s islands, and our puffin in particular came from Eastern Egg Rock Island and was adopted as part of “Project Puffin,” a seabird restoration program through the National Audubon Society (Audubon is the name of a person, not a bird – don’t act like you weren’t wondering). Project Puffin is well.. a project, which is designed to study puffins and help them flourish. You can adopt a puffin by sending them $100 and they will in turn send you a whole packet about your specific puffin. However, Project Puffin partnered with Barbara’s and now you can send in 20 UPCs, (which amounts to less than $100 plus you get 20 boxes of cereal) in lieu of writing a $100 check.

So that is what we did since we don’t really have $100 dollars for a puffin, but we do consume cereal and want a puffin.

Our puffin is named “Optimus Prime,” or OP for short (you get to name your puffin – checkmate African children).

OP’s story starts a good bit ago, when we started our collection of 20 UPCs 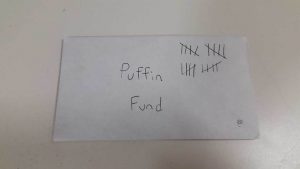 Yes I still send in cereal box codes for things.

And then we mailed them off. But, I was apparently too excited and left a number out of the address, and since USPS can’t find a cereal factory which takes up the entirety of the side street (I looked) without the last digit of the number, they took 1.5 months to return our envelope to us, greatly delaying our puffin adoption process.

So, I peeled the stamp off the old envelope and taped it to a new envelope (inclusive of missing digit) and sent it off again.

The response was much quicker than expected. First, we got a letter from Barbara’s saying they had gotten our 20 UPCs and had sent the adoption form on to Project Puffin. 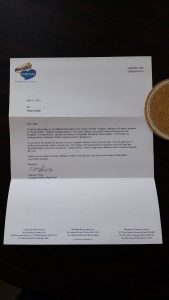 You know you are important when cereal manufacturers write to you.

Then shortly after that our packet came! 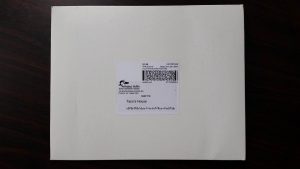 More exciting than a diploma.

Inside was a plethora of goodies about our puffin, puffins in general, and Project Puffin itself! 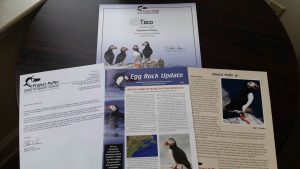 Most importantly it contained our adoption certificate! 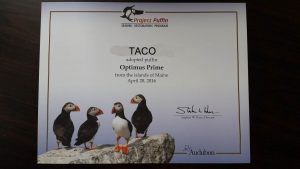 Optimus Prime – the newest member of our multi-species family.

As for Optimus Prime, we know this much about her/him:

OP’s sex is unknown, but OP hatched on Eastern Egg Rock on July 10, 2001, in Burrow #38, making OP nearly 16 years old (puffins generally live to be around 20 years old in the wild). OP has also been a pretty good parent, successfully raising 6 out of their 8 pufflings to maturity. OP has claimed Burrow #115 as their dominion and will fuk ur shit up if you try to take #115 for your own pufflings. OP’s U.S. Fish and Wildlife Service band number is 875-88210. OP is fond of Burrow #115 and a landing zone known as “Zag Loafing Edge” on the island, which is likely where OP will be chilaxing this year and making another puffling (since we don’t know OPs sex, the process of making shall vary accordingly).

Here is a picture of Optimus Prime when he/she was 14. 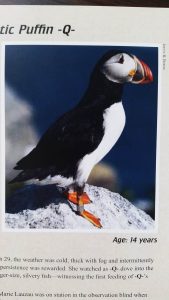 So, now we have a puffin, named after the lord of the Autobots no less – which is pretty exciting. Of course what is even more exciting is that you can adopt up to 5 puffins per year through Barbara’s UPC program – so, needless to say, Optimus Prime won’t be our solo puffin for too much longer. 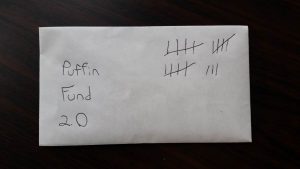 Our next child awaits.

In fact, I’ll likely be opening up boxes 19 and 20 today so that we can get our next puffin adoption form sent out. As for the name of puffin #2, well you’ll just have to wait for that post.