I’m in the middle of what is looking to be the craziest stretch of this semester, but that’s all I’m going to say about that. For this post I want to focus on much more exciting things than law school. More specifically, Pig turned two last week! We celebrate quite  a few birthdays in the Taco household these days, but we don’t let that diminish the fun. This is especially true since our birthdays tend to be a multi-day event anymore, largely because we are often too busy to limit celebrations to any one day.

Pig is a big fan of spring, which works out nicely since his birthday is in spring. That said, we went through a bit of a rough patch with spring that left all of us sitting inside and twiddling our thumbs (or rather, doing school work) as we waited for the nice weather. 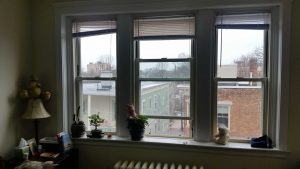 And wait we did. For like a solid week it just rained. 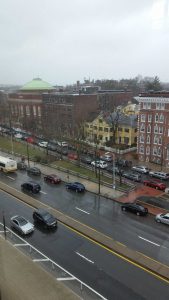 In many ways it was like we were stuck in a weird spring Twilight Zone. On the one hand spring activities were starting – such as grounds-keeping at the law school: 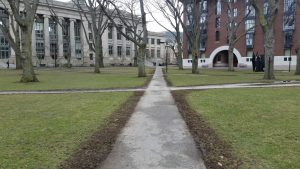 – but on the other hand it was still way too cold.

But not all was dreary, because despite the rain – a certain little piglet turned two! Now, Pig is a creature of many talents. In addition to be a certified Yoga Therapist with over 2,000 hours logged, Pig also likes to wallow in mud – especially if there are grubs in the mud to snack on. Beyond his staple of grubs, Pig is also a big fan of berries, peanut butter, and worms – as well as anything tuber. So, as Pig’s 2nd birthday approached we decided to share a PB&J yogurt for breakfast one morning! 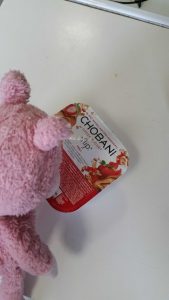 But not content with packaged noms, we then endeavored to make our own homemade strawberry-grape jam! It turned out super yummy – also it was National Peanut Butter & Jelly Day! 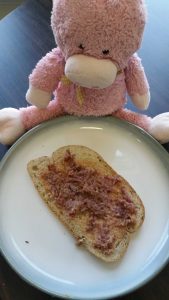 And this was all just the buildup to the big day! Pig’s actual birthday fell on a Wednesday this year, which is a long day for both SB and I. So we decided to add some birthday flare to our Wednesday morning coffee date before everyone went their separate ways. I got the idea to add a little treat to Pig’s breakfast. 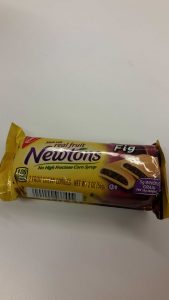 Truth be told, Pig had never had Fig Newtons before – and it had been many years since I’d had them myself. So I took a gamble and made the assumption that Pig would probably love figs. It was a safe bet. 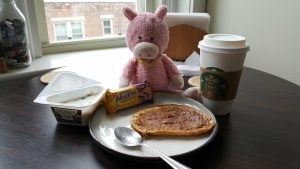 Pig was hugely ecstatic about “Pig’s Figs,” and he gobbled them down with his coffee, homemade jam PB&J, and yogurt. All of this after a morning run! It was a good birthday breakfast by all accounts. Once our yummy breakfast was over we had to get back to work, and we worked until Friday afternoon where we met up with Aunt Train for (an also yummy) dinner and drinks at Emmets Pub. After getting back home and settling in – the real treat of Pig’s 2nd birthday celebration was unveiled. Dirt pudding! 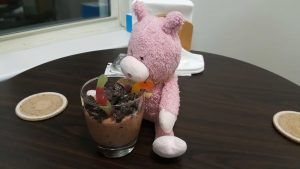 Pig had dirt pudding for the first time for his birthday last year, and was very excited to have it again. So, over the course of several days SB and I accumulated the ingredients from different stores – with the last ingredients requiring me to walk 35 minutes in the pouring rain on Thursday, but it was worth it! Pig was very happy and we all got fat and pompous from the delicious dirt pudding, with worms of course!

Another nice thing is that the weather has really improved since last week. The constant rain and cold has given way to sunshine and warm temperatures. Over the weekend (while I was in a team meeting, go figure) Pig and SB took advantage of the weather and did some reading in a nearby park! 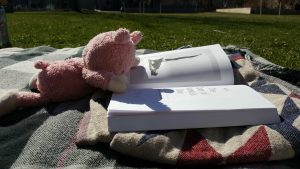 Another exciting bit of news is that Pigsten has acquired a new “rock” – this time a “gift” from SB. SB had a training at work where they used these little green “stones” as part of an exercise. Well, as soon as SB brought that bad boy home Pigsten cabbaged right onto it, and it has been his ever since! One does not simply bring rocks, or rock-like-objects, into Pigsten’s dominion and hope to retain ownership of them. 🙂 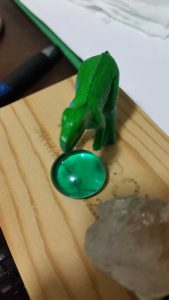 Plus, since Spring is finally here – I naturally had to adopt a Tulip on Plant Nanny (oh you silly person did you really think I wouldn’t talk about my plants? 😛 ). 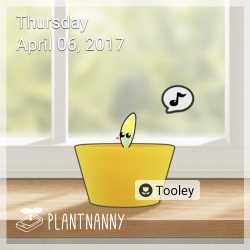 Tooley the Tulip – while fitting for spring – was EXPENSIVE! She cost 300 seeds, but hey at least her yellow pot was free! Tooley is also the highest difficulty plant I’ve raised thus far, and while I’ve kept her hydrated and happy, progress has been slow. I’d normally be half way through level 3 by now, but Tooley is just chilling on level 2. 🙂 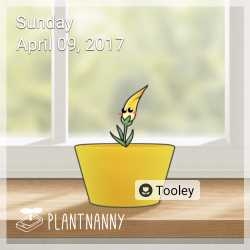 Edit: Well, ask and you shall receive, Tooley just leveled up! 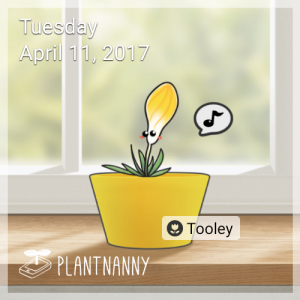 However, from the looks of the progress bar level 3 going to take a loooong time (and so level 4 will be even longer).

Anyways, that’s all for now. I just wanted to share the fun times we have with Pig for his birthday! I have a lot of work to get back to, as I have a big presentation coming up (and naturally it happens on the only day in the whole week it’s supposed to rain) as well as a bunch of other stuff I mentioned here. But, I can’t complain too much with the nice sunny weather we are having for the moment, and Pig agrees – via “Oink!”