As SB and I progressed towards the tail end of our moving bucket list it came time to get juicy, literally. There is a farm just a bit outside of town that has a “you pick” system in place for blueberries. Now, I have to admit, I don’t believe I have ever picked fresh blueberries before. If I have I do not remember it, the same goes for SB. This is interesting because I love me some blueberries. In general, when it comes to fruits, anything that ends in “berry” is good deals. Since we both like blueberries and had never picked them before it was a natural choice to add to our bucket list.

The farm, Prelock Blueberry Farm, was pretty easy to find. Sure we blew past the turn off the first time, but that is pretty much par for the course for us. Once we pulled in to the place, which was larger than it seemed from the road, a younger fellow directed us to a parking spot which was pretty much a field (scratch the pretty much, it was a field). We were then given a bucket and he lead us down to row 18. 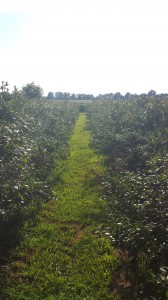 That was the first thing that was neat about the farm, you actually got your own “private” row of blueberries to pick. While there were a few people around us, everyone had their own row and you could pick from both sides of it. This meant that you didn’t need to beat anyone to death to claim the bluest berries. We enjoyed picking the berries quite a bit, I can see how it would lose its fun quickly if you had to pick 200,000 of them or something, but for a casual activity it was nice. Of course we also ate quite a few and they were legitimately the best blueberries I’ve ever had. Our goal was to pick enough blueberries to make some blueberry pancakes, we greatly exceeded that amount, I think because we just liked picking them. No worries there, blueberries make a great snack by themselves. After we got a little pile in the base of our bucket we walked back up to the parking area to pay. 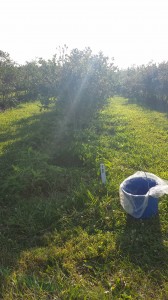 Which brings me to the second cool thing about the farm, the price. Because we picked the blueberries they were very, very cheap. Our pile clocked in at 1.65$ and this was for what would have easily been 8$ worth of blueberries at the store, plus these were ultra fresh. It was a lot of fun for a good price and they were local. The blueberry pancakes also turned out amazing.

After pickin’ bluebarrahs we headed to the local brewery one last time. This part of the night out started off on a rough spot because our favorite beer was gone. Despite it being advertised as a year-round brew, they didn’t have it. That was frustrating, considering that we in all likelihood may never be back. But we did what all people must do at times and compromised. We ended up getting the Holy Dunkel Weisse. Now, traditionally a dunkel weisse would have been a darker wheat beer. However this particular dunkel weisse was more in the medium scale of things, so maybe that is where the “Holy” part comes from. Or, it might be because you say “Holy Shit” when you see how big it is. 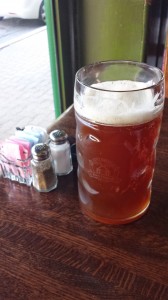 It might not look it, but that is slightly over 1 liter of beer. Now, while that is a standard size in Germany, that’s very big in these parts. In fact, they call it the Maßkrug in Germany, or more often just Maß. The full name literally means “liter pitcher” or “measured pitcher” depending on how technical you want to be. Either way, its big. We got one because it was actually cheaper to share that than to get two pints (the brewery does not offer pitchers for whatever reason). Along with our big beer I got a jalapeno chicken melt and SB got a pheasant sausage sandwich. Neither of us had had pheasant before (so it was a night of two firsts!) but it was good. Tasted more like sausage and less like weird than you might think.

Afterwards we went home and enjoyed some baked treats from a local Mexican Bakery called Mama Ines. They are amazing good and very cheap. We also got some tamales for the next day (which were also good, in case you were wondering). So all in all it was a nice last Friday out before the move. I think at this point we only have two things left on our list, neither of which is especially major but I’ll try to get in one more post about it before we hit the road. 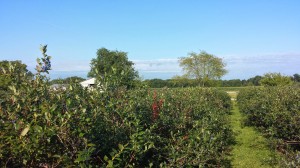