First off, I changed the title of my blog to English, because I’m one of those people who generally dislikes when people use a foreign language to sound cool without really knowing the foreign language. In light of that hypocrisy, I have changed my title to English, which makes it easier to refer people to anyways. Not to mention, this one is a lot more meaningful to me.

Well, on to business, I had my Norway trip this past weekend, which was really crazy and really fun at the same time. The cool fact, is that I have now visited all of Scandinavia, how bout dem’ apples? The trip to Sweden was a DIS trip, whereas this trip to Norway was just done independently (though organized through one of our SRAs, Christian, who is Norwegian). As such, there wasn’t much in place to keep people from going absolutely wild in the worst ways possible, but that is neither here nor there, nor relevant to myself or my experience with/in Norway.

So, as I think I mentioned, we traveled to Sweden via train, across a huge-arse bridge. With Norway, we started with a train, to get to the Copenhagen harbor (Copenhagen, or København, actually mean’s “Merchants Harbor” /fun fact). Once we got there, we found our “ferry”: 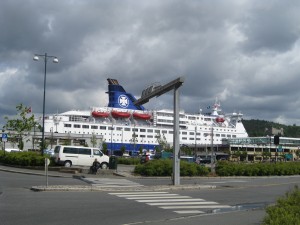 (This Picture was actually taken in Oslo, it was raining when we left Copenhagen)

It was the Crown of Scandinavia and technically, yes, it was a ferry. However, it was certainly not what I had in mind when I thought of a ferry. It was more of a “light” cruise ship, light in the fact that it wasn’t near the level of the Diamond Princess that Papaw Danny and I took to Alaska, but at the same time far nicer than would b expected. As with most ferries, one of its main purposes is to carry lots and lots of cars, two entire decks in fact. The funny thing about that, is that when booking, we obviously got the tiniest, cheapest, most inisidey-ist cabin possible. Well, it was tiny, it was inside, and it was cheap.. and it was under the cars. Yes, we were under the cars in the very bottom of the boat, we were actually below the propeller on the cross section of the ship. Think of the poor people locked behind the gates in Titanic, yeah, we were those people. So after a night (it was an overnight ferry) of avoiding my tiny cramped cabin as much as possible, we got to Norway (Oslo), where we began the “Asian-style tour” (i.e. fast) courtesy of our SRA Christian.

Oslo was an awesome city, especially once we got away from the really industrial and cold looking harbor. We saw a myriad of things from the Opera (designed to look like a giant Glacier) to the King’s palace. For me the highlight of the trip was undoubtedly seeing the real viking ships in a museum there. They had been “burial” ships, and one of them had been preserved quite well because it was buried in very salty soil. That ship was Oseberg, which dates from 800 (notice the lack of 4 digits). It was actually used first, then buried, whereas most are built specifically for burial purposes. It was mind blowing to touch the sides of that ship, especially when considering that these men sailed across the entire ocean in it. Here is a close up photo of the wood-work done along the bow of the ship: 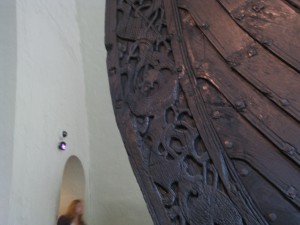 There are more photos, but I shan’t post them all here 😛 Needless to say, seeing the boats, especially Oseberg (the most preserved) was one of the coolest things I’ve done thus far. Another cool thing we did in our brief trip to Oslo was to go to the National Gallery of Norway, which obviously features much of the works of Edvard Munch. We weren’t supposed to take pictures in the “Munch” room, not even without flash. However, once I laid my eyes on the original “The Scream” I decided to rebel against the system as I often do. I did turn off the flash, because I didn’t actively want to do any damage (or get caught). But this is such an awesome painting, I enjoyed it before seeing it in person, but seeing the real thing was just way awesome. (As a bit of info, a COPY of this painting just sold for 119.9 million dollars) 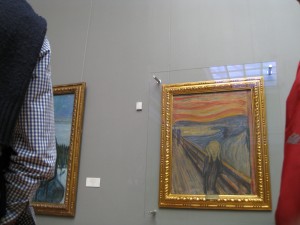 (The weird angle is obviously explained by the necessity of being discrete.)

So after paintings, ships (new and modern), royalty, street vendors, some ferrying around the fjord, so on and so forth, the short 6.5 hour stay in Oslo came to an end as we needed to catch the ferry back. All in all, I saw a lot of awesome historical stuff (Including the balcony and building where the Nobel peace prize is given), touched some things 5x older than the United States, and visited a beautiful land that reminded me a LOT of Alaska. I would really like to return to Norway someday with a little more time.

After getting back, it was immediately time to shift gears into school mode, as I literally got off the boat then went back into downtown for a group meeting. We had 40% of our class grade due today, 20% was a paper, the other 20% was a student debate. I was placed on the debate time that had to argue that legalizing prostitution would be an effective way to combat human trafficking, and since that’s the side I tend to fall on outside of class, it wasn’t too bad, but there was a lot of stress involved as the assignment/debate was VERY detail intensive. But its done, and with that I have only 3 days left of my first class! The final exam is on Thursday, but I was more concerned about the debate than the exam, as the exam is written (but don’t take this as overconfidence, these classes are HARD).

And since I just hit the 1,000 character mark, and am quickly burning myself out (I mentioned I hate blogging, yes? Good), I’ll proceed onto the:

Tidbit of the Day: The Danish Sun

Feck the Danish sun. Well granted it is not as bad as Alaska was, it still likes to come eat your eyes out of their sockets at about 4am. This of course happening after it finally sets at about 1 o’clock in the freaking morning. Generally, if I could purchase some mad blackout curtains, that might not be much of an issue, but since DIS provided us with high-tech blinds from 1941 and nothing else, there is little to keep the sun from pouring in. Enter the sleep mask. Before leaving, I purchased ear-plugs from Kroger, and a 7$ sleep mask from Amazon. It is, beyond a shadow of a doubt, the best 7$ I have ever spent in my entire 25 years of existence. So a word of advice, if you go to Denmark, buy a sleep mask, don’t fuss, just do it. Now, in a bit of a twist, the sun hasn’t been “out” that much, but its still been bright enough to blaze trails even from behind the clouds. Luckily, as I type this, we have blue skies! For those of you wondering about wether or not Europe is as cloudy as people claim, the answer is yes, yes it is. The Caucasian race now makes so much more sense.But don’t think for a minute that the sun won’t wake you up at 4am with tantalizing lies of you oversleeping, because it tries everyday.

In parting, here is a photo of a Norwegian Fjord Horse, notice the AWESOME Mohawk. Best Friends. 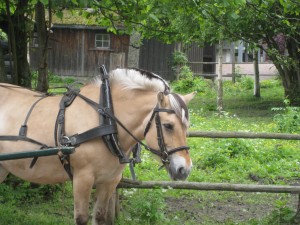