It’s now October Break for us law students. While most law school breaks are pretty pathetic, I have to admit that October Break is fairly decent for us in that we get two days off. Sure, this isn’t really up to the level of the October breaks of undergrad-yesteryear, but I’m not complaining about two days off. In fact, due to a couple of things I’ll actually not have class again until Monday, October 19th, but that isn’t quite as magical as it sounds. Namely because I have a lot to do between now and then with my clinic, my journal, and other various class things. Also, next Tuesday and Wednesday I’ll be in Washington D.C. visiting the Supreme Court and the United States Solicitor general, as well as a few other places, but I’ll give that its own post. Due to that trip, I’ll also be missing class on Wednesday, which will be the first time I’ve missed class in a decade. So all that comes together with my normal schedule and I have no actual class until the 19th – could be worse.

As far as what’s been going on around the law school, its the same ole’ same ole’. I have nothing to report other than that I continue to be stupidly busy. The other day I did discover a cool “Produce Sharing” program that the school has, but of course its only for faculty and staff, bummer. 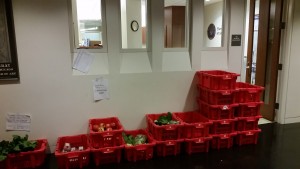 One of the plus sides about being at the law school late is that the “late-night” law school is scarcely similar to the “daytime” law school. It’s actually pretty freaky just how different the two are, despite being the exact same building. Whereas the daytime school reeks of stress, anxiety, pretentiousness, arrogance, sorrow, and competition, the late-night school is more mellow, mysterious, and eerily beautiful. For instance, while coming home the other night there was a girl alone in one of the lounges playing the piano and I mean playing the piano very well. 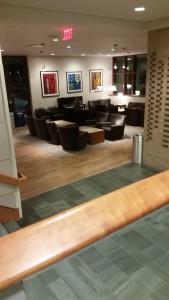 But outside the law school October rolls on! Yay Fall! And now that it is actually October, all sorts of Oktoberfest stuff has started up. SB and I were actually planning on going to Harpoon’s Oktoberfest, but it was cold and rainy and cost money and like 12 trillion people were going to be there, so we decided not to go. That said, we didn’t ditch Oktoberfest entirely, we decided to go check out Shake Shack‘s Oktoberfest (simultaneously our first time eating there), which, admittedly wasn’t quite a real Oktoberfest, but they still had Bavarian-style fare! 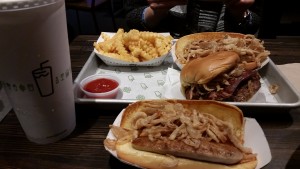 Now the food was decent (we didn’t have a shake though, sacrilege, I know), but the atmosphere was just meh. There was a birthday party RIGHT next to us, which was bad, but I get that its not a constant thing, but even beyond that the place was just too loud and busy for my taste. Oh, and if you were wondering, we didn’t order three entrees, they screwed up our order and we got one free. I didn’t dislike the place to the point that I’d never go back (I initially blacklisted it, but in hindsight that was too aggressive), but I’ll want to wait awhile. It was still a fun outing with SB though.

In keeping with the Fall theme, I made yet another baked good, this time chocolate chip pumpkin muffins! 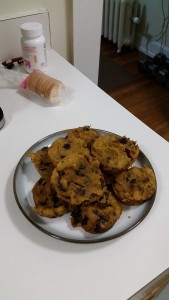 Granted, they weren’t really.. ehm.. muffiny, but they still tasted really good! Luckily (for my waistline) our big huge bag of (long expired) flour is now gone, so I should be returning to normal-sized weekend treats, at least for awhile.

As if I even needed to say it, the Fall beer lineup is going strong here at the Taco household. 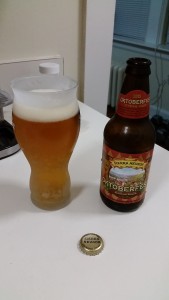 This was a pretty good Oktoberfest, it is medium-bodied and rich with bready and toffee-like malt flavor but maintains a crisp finish marked by floral and spicy hops. Nothing super memorable, but a solid offering, which is to be expected from Sierra Nevada. 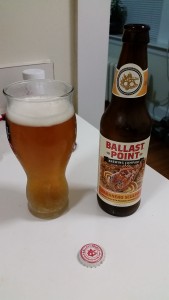 Ok, so this beer, THIS beer right here, is memorable. Why? Because it’s hot as hell. No seriously, they don’t mean “A hint of habanero” they mean, “DRINK THIS LIQUID PEPPER.” This beer is HOLY COW hot. My mouth and throat were burning. If you remember, I’ve had the Grapefruit Sculpin, but this heated-cousin is a different beast entirely. Just wow. I think this one is much better suited to the “Sculpin” name, since the fish can sting. It wasn’t bad, but I wouldn’t call it good either. If I have it again, I will definitely drink it with food, this is NOT a standalone night-cap beer. 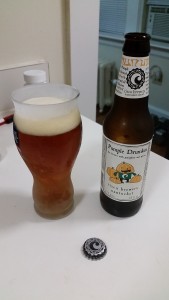 “On Nantucket a Pumple named Drumkin, brewed up some great ale with his pumpkins. One and all came to savor the delicious flavor, then wobbled around like bumpkins.”
You must drink this beer, that is all. 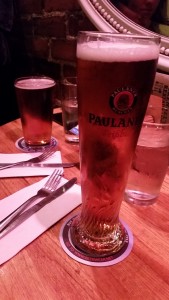 I had this mighty half-liter during a Friday-night Oktoberfest at Grendel’s Den. This is a medium bodied märzen with a rich malt flavor, dark toffee notes and an underlying fruitiness that balances the hops. It’s a solid German Oktoberfest, which would make sense. 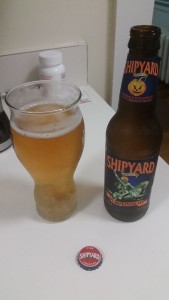 So I had actually had this beer last Fall on tap in the law school’s pub (yes, we are so “prefstigous” that you can get drunk inside the school), but that predates the beer list. This is probably the most pumpkin-flavored pumpkin ale I’ve had, in fact it’s almost too pumpkin flavored, to the point it seems a little artificial. However, it’s still a good pumpkin ale and I’d recommend it, just expect a LOT of pumpkin flavor, or as SB put it “It almost tastes like pumpkin juice.”

In addition to drinking and eating at home and with SB, I also had a chance to grab lunch with Aunt Train. She was in the area and I (luckily) had time, so we met up at went to a locally-famous burger place called Mr. Bartley’s. People just rave about this place. They are known for their burgers, obviously, and to their credit they do have quite the selection of rotating and comical burgers. 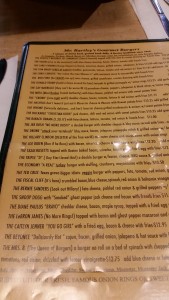 I realize that image is small, but they have burgers named after everyone and everything from Tom Brady, to Donald Trump, to Gay Marriage, to Bernie Sanders, to even Viagra. Yes, its quite the selection of burgers, and the burgers were good. Sadly everything else was mediocre at best. First, the place only takes cash, and doesn’t even tell you that except for a small (and I do mean small) sign near the cash-register. Second, it’s communal seating (so you’ll eat sitting about 10 inches from a stranger) but what makes that bad is that its cramped communal seating, so much so that if one person wants to get up, the entire table has to get up. They also seat people really oddly, they’ll mash a bunch of people onto a four-top, leaving like 8 completely open seats elsewhere. Third, they have no restroom. Yes, seriously. 2015, “Gourmet Burgers,” no restroom. When I asked I was told to go to Dunkin Donuts. Yes, seriously. Then to top it all off the service was just meh and they were definitely trying to rush us. 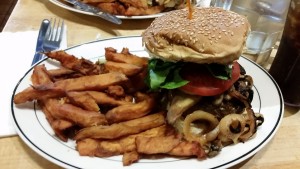 
However, the company was good (not the strangers sitting in my lap, but Aunt Train) and it was nice to get out of the clinic for a bit. While I would recommend Bartley’s food (although it’s overpriced, in my opinion) I would say GET IT TO GO. While the burgers are good and fun and unique, the dine-in experience sucks. 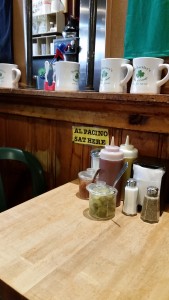 The only plus side to dining in was that they had cool paraphernalia and had marked the spots where some celebrities had sat (I doubt they were mashed in with strangers).

But, by and large, most of my time lately has been spent either working at school, or working at home. At least at home I have the Boys to keep me company, at least when Tristen isn’t busy “Rettin’ Manries.” 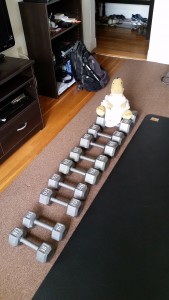 And of course on Sundays they are glued to the TV. 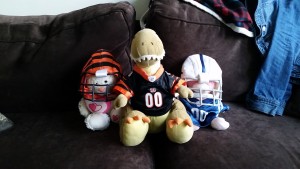 Of course this Sunday I should actually be able to watch football too! Woo! I’m sure there is something I could be doing, but it’s been a very rough week, so I think I’ll just elect to do nothing and instead spend some time with SB and the Boys. Besides, my “break” isn’t actually going to be much of a break, so I have to enjoy the weekend while I can! 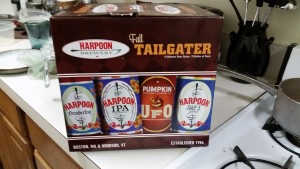 This is a good variety pack, as most Harpoon’s are. With their solid Octoberfest, above average IPA, delicious UFO Pumpkin Ale, and highly drinkable Take 5 session IPA. 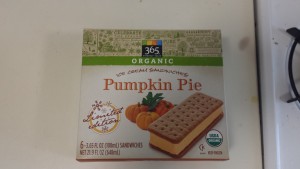 
I’ll be sure to check in again sometime after I’ve had my Washington D.C. “business/school” trip. Here’s hoping that this “break” is as “breaky” as possible. 🙂 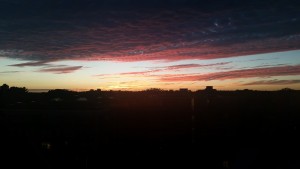 P.S. – A gorgeous sunset from the fifth floor of one of the law school buildings (the water in the distance is “Fresh Pond”).