So this post will wrap up my three part series on the actual process of moving. For context be sure to read Part 1 and Part 2 if you have not already done so.

So, when we last left off we were actually at the new Cambridge apartment. Us and all our crap that suddenly seemed to be a lot more crap than necessity when we originally packed it. The good news is that the apartment itself was in good shape. With these really old buildings (and just apartments in general, really) you don’t know what to expect. The last time we had rented an apartment site-unseen, which also happened to be from a university, the initial reaction upon moving in was pretty lukewarm. However, this time around SB and I took to the apartment pretty quickly. We noticed a few minor things, which I have of course since fixed, but other than that, all was well. The only real catch was that it was on the 4th floor of the building. Oh, and yeah, no elevator. But, it gets better still. The staircase is cramped. Don’t believe me? See this photo: 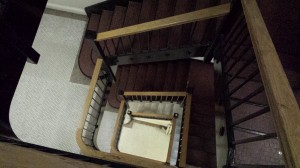 Sure, that might not look bad as an image and from a weird angle. But it is. If you have doubts I will be happy to give you the privilege of carrying a bed up those stairs, or a large television if that is more your fancy. Point is, it was the hardest actual move-in I have ever engaged in. Furthermore, it was very well one of the hardest physical things I have ever done. I’m not an Olympian, but I do exercise regularly in various forms from the Gym to stuff like Insanity. So, while I can’t life semi-trucks, I’m not in bad shape. That considered, this was still hard as heck. The good news is that I wasn’t doing it alone, SB was helping as well. The bad news is that I had to do most of the heavy stuff, simply because of physics. Of course there were a few items that required two people, such as our box-springs, mattress, TV, coffee table, etc. Now, I will say, at two different points people in our building helped us move an object. One was for the coffee table, the other was for one of the (still in box) pieces of Sauder furniture. So that was definitely nice, even if it was only a drop in the whole bucket of things that had to be carried upstairs, it was nice.

Out of everything in the truck, it is hard to say what was the worst. We had built the bed up to be terrible and saved it for last, and while it was indeed bad, I don’t know if it was the worst. Honestly some of the smaller stuff like the Sauder furniture hit us the hardest, simply because we didn’t have breaks and were wearing down. We were lucky that there was no rain and the temperature/humidity weren’t horrible, but that old stairwell got stuffy really fast. To get from ground level to our apartment is 53 steps. We likely went up the stairs in the range of 45-55 times (each) and so if you count the down, were tackled somewhere in the range of 2,385 – 2,915 stairs, 50% of which was traversed while carrying anywhere from 15 to 115 pounds. Needless to say, this got old really fast, but we managed.

Around this same time, the scheduled people started to show up. Comcast was first, and of course the technician tried to install stuff we explicitly had said we didn’t need (this after our bill was wrong). That was rectified relatively easily though. Next up the air conditioner guys came and boy they were streamlined, they had both A/Cs installed and were gone within 5-8 minutes would be my guess. This compared to the last people who installed our window units which took at least 30 minutes if not longer to do. But everyone came and we got everything into the apartment in time. We were on a schedule because our parking permit for Lily was only good until 4pm, then suddenly our box truck became illegally parked on a permit only street. So, with scarcely a break from carrying stuff, we were off to Medford to return Lillian. In theory this should have been less bad than the drive into Boston, but we managed to hit things right around rush hour.

Much like during the morning commute, I figured out that I would just have to smoosh people to get where I needed to go, because they weren’t going to play nice. As usual, the GPS made things more complicated than they needed to be and there were a few traffic choke-points that were just ridiculous. But, once again, we did it. We stopped just down the street from the Penske house to refill Lilly and got some snacks. Penske is kind enough to charge you 10$ per gallon if you don’t leave the truck with as much gas as it had when you picked it up, which was full for us. We parted ways with Lillian, which was oddly a little sad, considering what we had been through, then took off back home. Naturally this immediately resulted in us waiting, and waiting, and waiting (in the direct sun) for a bus. However there was a Budweiser plant right across the street from us, but no public access, so it was more cruel than cool. Eventually the bus came and we took that to a train, to another bus, to home. We slept very well that night, very well indeed.

Since then, things have slowly tapered off. It took us around 10 solid days to really get the apartment to a near final stage. Right now about the only thing not finished is my desk. Technically the desk is finished, but UPS was nice and smashed one corner of my desk, so I’m waiting on that to arrive and then I get to partially rebuild my desk. As far as clutter goes, we’re pretty good. We sold a few excess things (and even a Shiatsu massaging cushion someone had left in our storage unit) and have everything stored in the basement now. Which was a battle of Tetris-like proportions to say the least, its the smallest storage unit we’ve ever had and it is absolutely jam-packed.

So, we’re mostly settled. We didn’t have hot water the first day, or water at all the second day, but that has since been resolved and now we have very good hot water (its like a thing with us, boilers seems to break wherever we move). We’ve also been getting out and about, discovering which stores suck, which stores are good, and have experienced the joy of having someone bring groceries to you. We’ve also seen a lot in the surrounding area, from touristy stuff to townie stuff. I’ll try to write a sort of summary post of these things, but probably nothing overly detailed.

I think I’ll wrap up there, completing the process of moving. There will still be stuff popping up in the blog from before the move, so don’t let that get too confusing. Our three stage process was indeed an adventure, and while there was a lot of stress, its something I’ll look back on fondly in the future. However, next time I’ll pay the damn 500$ to have people carry stuff up the stairs for me.

P.S. I know I was a little light on the pictures this time around, but I was moving boxes. If you want more visual stimulation, then below you will find a picture of a box, enjoy.