I am sick again.

This continues a pattern of me being sick that started once we moved to Boston. In the past 7 months I have been sick more times than I have been sick in the two (if not three) years prior to those 7 months. I think its a combination of 1. Just being out more in general 2. Cold weather 3. Law School (i.e. stress).

Since I am sick, it is only natural that I just got back from running through the snow to a USPS delivery box. I have something that needs to be shipped tomorrow (Monday) and since I just found out that school is closed again tomorrow, that sort of killed my shipping plans. Luckily I found out that the 13oz rule only applies to stamped mail for the Blue Boxes, if you electronically purchase a label then its ok, since they can track you. So that is what I was doing, since the snow is only supposed to get worse.

Yes, more snow, yes this is the third time in a row. I’ve heard as much as two feet, which is of course on top of the 3+ feet of snow that we already have. I saw earlier today where the National Weather Service had said that Boston broke the 7 day total snowfall record, I believe that. In fact, I was just telling SB a couple of days ago that this is the most snow I have ever seen in my life, and I stand by that statement.

But yeah, another snow day tomorrow for Harvard. I was actually surprised by how early they called the snow day, especially since this past Monday they stayed open when they really, REALLY should have closed (I am fairly sure they were the only school in the Boston metropolitan area that had a full day). But they did. In theory that is nice, in actuality it means Friday makeup classes. I loath the makeup class policy, but that is not news to you if you’ve been reading this blog for any length of time. But, the silver lining is that I don’t have to go out tomorrow and I already did all my reading today, so its pretty much a giant “free” day that I will get to spend being sick. Still, the plus side is no more walking about in this: 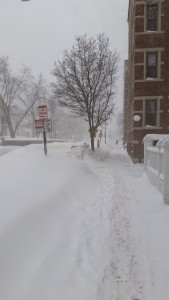 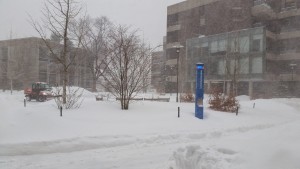 Or coming home in this: 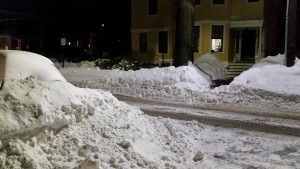 To be fair to the snow, those pictures are actually outdated now. There is much more snow. Mother Nature really decided that she just wanted to make sure Boston stayed snowy until mid-August. I actually blame my current illness on the crappy daily walk to school I’ve had to endure lately. The howling winds, flying ice, bitter temperatures, and general wetness of it all are rather conducive to getting sick. I am sure the viruses are rejoicing.

But its not all bad, having this much snow. The upside is that it makes using our French Press coffee maker even more enjoyable on Sundays (seriously, French Press coffee is AMAZING). Plus, there are funny little signs like this posted in the law school: 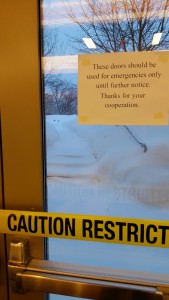 I guess they don’t want you walking out onto the rooftop wasteland and walking straight off the edge of the building, which would be quite easy to do since the snow is now way above the wall along the edge. Harvard also took advantage of the cold weather to build an ice skating rink (which I already mentioned here). However, they took it a bit further and also ordered up some food trucks AND fire pits. 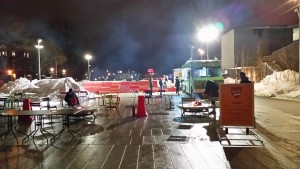 Granted, I haven’t actually went down there yet (since I can’t skate and have no skates) but it sure does smell good walking by the plaza with those two wood fires going. Plus, some people are taking the continuous snow storm in stride, literally. 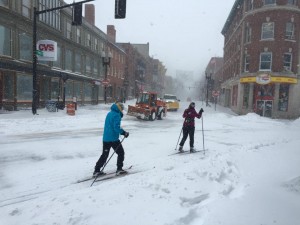 All this talk of the cold bring me to my next, rather somber point. Its time for my beloved blue Starter Jacket to retire. If you remember from this post, I can sometimes develop an odd obsession with “things” thus: 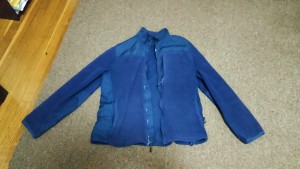 It appears oddly bright blue in that picture.

Anyways, this jacket has seen me through a lot. As of 2015 the jacket is now ten years old, and these past 10 years have seen such an extraordinarily large amount of change for me that its a bit hard not to feel as though my blue jacket was a passenger along for the ride. It was not an expensive jacket. While I can’t recall the exact details my brain tells me that Stepmom bought it for me from Target. Its just a basic fleece Jacket. But it was my basic fleece jacket, and, most importantly, it had that amazing chest pocket that I found out works amazingly for smart phones (after owning the jacket for 9 years).

But, like all things in life, time drags on with its wear and tear and so too did Blue Starter Jacket. It started with a little hole at the bottom, then the dark day came when the zipper irreversibly snagged, forcing me to break a few of the teeth to get the jacket off, which resulted in a bad spot on the zipper and the zipper just generally not being that strong anymore. Finally, the chest pocket started having a few threads come undone around its own little zipper. In essence, the jacket was still a jacket, but it was time for me to move on. It was an oddly sentimental moment and I resisted it for multiple weeks before I finally purchased another jacket, at Target no less, which was HEAVILY discounted from its original price (49.50$ vs. 225.00$). 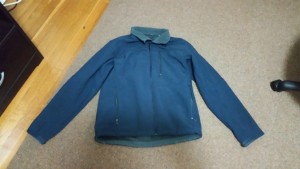 As you can see from the above photo, it doesn’t look anything like my old jacket, nope, not in the least. I am creature of habit, if nothing else. Its a T-Tech jacket, by Tumi. I had never heard of them, but based on the price I now blend in ever so slightly more with my classmates, but still not to the point of 22,000$ handbags (No I am not even joking). But, generally speaking, this new jacket is a step up in every way: The zippers work, it has a bigger chest pocket (annoying at first, but its growing on me), its more wind resistant, its more water resistant, and its warmer in general.

As for old blue, well, it is getting donated. I thought about recycling it, but “reuse” is even better than recycle, and the law school has a donation area. While the jacket has a few issues, its still a good jacket, and I hope it goes on to serve someone else as well as it has served me. 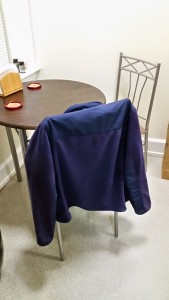 Back to normal affairs, SB and I still managed to have our Friday night out (I wasn’t sick yet) despite the extreme cold (maybe that is why I am sick now). It was my turn to pick, and we ended up going to a place nearby (right next to Darwin’s) called Mona Lisa Pizza & Grill. Somehow we had never actually been here before despite it being so close. I have to say, the food was good, the dining experience was not, namely because it was so freaking cold in there. The guys in the back were fine because of the blazing ovens, but out in the small dinning area (which reached single-digit temperatures each time the door was opened) the heater seemed to be doing very little. My hands and feet were uncomfortably cold the entire time (thanks Raynaud’s). As for the food, I went with the Buffalo Chicken Roll-Up (I like when places call them roll-ups, as opposed to wraps) and SB went with the Fried Haddock Sandwich. My Roll-Up was really good, the wrap itself was similar in consistency and texture to a crêpe. Also, both things were huge. 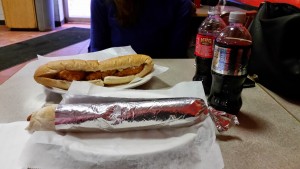 So, it was good enough to go back, but not until its warmer (though it will probably be super hot in there) or we get takeout. After that we went and got some treats (a cinnamon roll and a piece of apple pie), me some beer (nothing special, just Yuengling Light again), and then chilled. Which, is exactly what I am going to go do now. My reading for tomorrow (I guess Tuesday now) is done, I was fairly productive yesterday (working on an outline for my stupid LRW brief), and also I am getting that late-in-the-day-tired that accompanies being sick. Tomorrow is hopefully going to be a lazy snow day and maybe I will get lucky and convince SB to go obtain the two free drinks we have on our Starbucks account. 🙂 [Edit 2.5:  She did!]

[Edit 1: My chill plans were slightly sabotaged, one of my professors assigned an additional 60 pages of reading and my LRW partner wants to work on our brief outline remotely, we’ll see how much of a lazy day I can salvage.]
[Edit 2: We ended up getting Tuesday off of school as well.]

Also, yes, if you were wondering, its still snowing outside as I finish this post. All snow in the world has decided it is time to party hard in Boston. 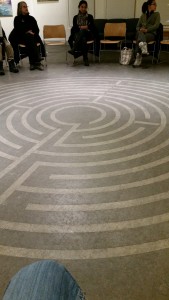 I recently went to a “Mindfulness” seminar, which was hosted by my Doctor. It was at a local church and I thought the design on the floor was really cool, so I took a picture of it.