So, remember when I said that I wanted to get in another post before I left for the summer? Well, considering that I’m writing this post from Montana I think you can safely say that I failed that mission. However, in my defense things were pretty busy for about a two week period and during those two weeks I was working with about the least amount of sleep I’ve had in as long as I can remember. The result was that there was no such “pre-departure” blog post in the way there was last summer or in January. So this post will have to do, it’s still a “pre-departure” post in concept, but we’ll both just have to pretend that I’m still sitting back on the east coast when I’m typing it, not 2,375 miles away.

The good news is that this post is going to be short (for me). Why? Because really I only have three things I want to convey, and I’ll just go ahead and lay them out right here so you can decide whether or not you want to continue reading:

So, let’s get started shall we?

Well, as I’ve explained many times before, during law school you spend both your summers working for a legal employer (see generally my entire Denver Check-in series as well as my New Mexico Mega Posts – though New Mexico was technically during J-term, so that was just me being overly industrious). I say generally because there are some people who don’t or can’t get jobs during their summers, and, barring a very, very specific set of circumstances (so specific that I can’t even think of them off of the top of my head), it’s a bad thing to not get a job – a very bad thing. But fortunately for me I didn’t have that issue and I’ve been gainfully employed (if not gainfully paid) for the necessary periods.

This most recent summer I’m working for an environmental non-profit in Bozeman, Montana. Consequentially, I’m also living in Montana – that daily Boston to Montana commute is pretty rough I’ve been told. This is my first time working for a non-profit since while my clinic is “technically” a non-profit, it’s also part of a university so I don’t really count it. If you’re wondering why I’d go to a non-profit in the middle of nowhere (insofar as airlines are concerned) rather than seek a massive paycheck in a big city, then you haven’t been reading this blog, so Welcome to Dinosaur Bear. But in a nutshell, I wanted to experience Federal Government, State Government, and Non-Profit work, so this non-profit job is the natural end point, with my having experienced the other two areas already.

So that’s where I’m at, I’m in the general Bozeman area. I work in Bozeman, but I live in in the hills (literally, except they are more like mountains and less like hills). And, if that didn’t make it obvious, I’m also renting a car for the entire summer, which yes, is just as expensive as it sounds. Fortunately I did a ridiculous amount of due diligence and got the cost down some, but not anywhere near I had hoped it would be. Still, a car is essentially required out here as the words “Public Transit” do not seem to be in Montana’s vocabulary outside of a few places.

As for what I’m doing. Well, I can’t say for certain, and even when I am certain I won’t be able to say specifically – at least not in the short term. So, broadly construed, I will be protecting wildlife, the environment, and yes even people, in fact I’ll be protecting a fair number of people, just not the big ranchers and oil company people. I’ll also be suing the government on a daily basis, so there’s that tiny detail. Thanks to the DOJ for teaching me how to sue people so I can now sue the Federal Government. 😀

Have no fear, I plan to keep on a’ postin’. In fact my goal is to just reutilize my Denver Check-in style (explained here). Since I won’t be stuck in the misery of intensive online business school classes this summer and hopefully I’ll have better internet my hope is that I’ll have a slightly easier time staying on top of things, though in fairness I don’t think I ever actually missed a week in Denver, I just wrote posts much later in the day than I would have liked. I’m also hoping to get away from the “Mega Post” style of Santa Fe, because those posts took days to write and I think they work better for shorter-term experiences rather than for covering an entire summer. I’m probably going to try to instill a word limit on the check-ins again, but I exceeded my 1,500 word limit an awful lot, so we’ll see how that pans out. So, in other words, regardless of how the format turns out, you can expect a sequential Bozeman check-in series that is similar to that of my Denver check-in series. With any luck, it will occur on a weekly basis, so watch out for those to start up in the future.

Well, as mentioned above, the goal is to start up a Bozeman Check-in series. Theoretically I could start that as early as next weekend, since that would be the end of my first week. In actuality there might be a bit (or a lot) of a delay because I have quite a bit of things to catch up on before I start the Bozeman series. Since my last post I’ve visited Cape Cod with the family, then even more family came to visit us in Boston, SB graduated from Boston College, and we even took a brief trip back home to watch the 100th running of the Indianapolis 500. So, I need to cover all of that, and I’ll probably try to squeeze it into one post so that the Bozeman series isn’t a month behind. And, considering my recent disdain for diary posts, I’ll probably try to keep the “Cod-Bos-Duation-Polis” post fairly brief – insofar as the amount of material is concerned. So, in sum, look for a “catch-up” post followed by the start of the Bozeman Check-in series at some point after that.

And there we go, consider this my “2L Summer Introductory Post.” Next time we meet I’ll be in Montana (because I’m totally not behind on my posting and actually in Montana already, totes mcgoats). 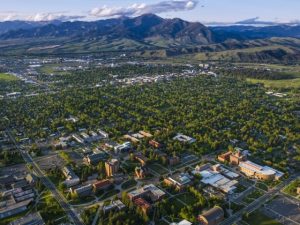 Bozeman in the setting sun.