As if there could be a more perfect song for this post:
Tom T. Hall – “I Like Beer”

There is one thing you should know about me. I like beer, a lot. Which is of course why I’ve decided to pursue law school. But joking aside, its my alcohol of choice.

So, from time to time, various beer related things are  bound to pop up in the blog.

I’m an interesting fellow when it comes to beer. I’ve brewed it, I know a lot about it, and I’ve drank more varieties of it than you’ve ever heard of (unless you are also a beer connoisseur). However, I shy away from the “Beer Snob” motif. While I will quickly tell you that there are about 10 million better beers than Coors Light, I’m not one who has to lecture you for 15 minutes about how you’ll go to Beer Hell (it exists) if you drink it. I drink all beers, from those macro brews many scarcely consider beer, to the micro-brews I really can’t afford but buy anyways, to the beers that more are akin to stout whiskey than, well, beer.

But most importantly, I drink free beer.

So yeah, its something I enjoy, so expect to hear about it from time to time. I’m not a big fan of wine or the myriad of hard liquors, nor do I really like mixed drinks. Just give me a beer, or maybe a beer with ice cream in it, if I’m in the mood. Of course any drinker must have their trusty mug, mine is this simple stein beauty: 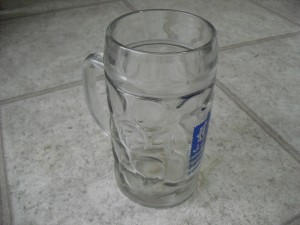 It was obtained from a street vendor at a Gay festival in Munich. It was nice because you paid a deposit for a class of beer, I just kept the glass. The deposit for the stein was literally about 10x less than what the same glass cost in a store. So yeah, it was good deals. Its from the Augustiner Brewery and reads “Augustiner Bräu München gegründet 1328” which translates as “Augustiner Brewery, Munich. Founded 1328” if you were curious.

If there was any doubt I like beer, refer to this older post and behold my wonder at a glorious beer collection.

So, there you go, I like beer. In closing here is a picture of the beers I’ve been working through lately. The three on the right, the unopened ones, are the ones I’ll probably drink tonight and/or tomorrow. For those of you who bothered to look, you probably exclaimed that Woodchuck is a cider, this is true. I like ciders ok, not as much as beer, but I acquired a taste for them in Europe. I put it in the picture because naminals. Thanks to FIL for purchasing the Shiner beers for me (we split the sampler pack, its a nice variety if you like Shiner, one variety, a Kölsch is actually missing from this picture as I gave the bottle to my Dad). 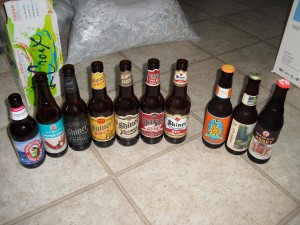