So I have to say, “Harvard – The Final Semester” (an obvious play on the “Space, the final frontier“) sounded a lot more witty when I thought of it 20 seconds ago. That’s a recurrent thing for me, I think I’m much more clever and/or funny than I actually am. The level of misperception may or may not be directly linked to the amount of pain medicine in my system. I’ll let you be the judge of just how much is currently in my system after reading this blog post. 🙂

Anyways, speaking of blogging, I know I haven’t been active recently. While all the normal whining applies, there is also the additional aspect of my blog being downright unreliable lately. I’ve wrote about this before, but basically what happens is that sometimes (I’ve noticed no pattern) I can’t edit my blog in any format, nor can I save anything. What makes it worse, is that while the blog says that it’s saving something, it actually isn’t. So, let’s say I want to add a new post – I can open up the post screen, type an entire post, hit “Save” and then I get the “Post Updated” confirmation message, but then the entire post vanishes (and rage is induced). Likewise, if I want to change a typo or something in an older post, the blog tells me I’ve changed it, but refreshing the page shows that the error is still there, and the number of edits on the post has not gone up. I also can’t add (or remove) any photos. It’s a real pain in the ass and makes the blog essentially unusable. What’s better, the support people (who Meem deals with for me) don’t see any issues. I’ve tried different browsers, going with no addons, trying a different computer, all that good stuff. Nothing fixes it other than just waiting for it to spontaneously start working again. So, there have been a couple of times where I’ve sat down to blog, found out I couldn’t save anything, and promptly said “screw it” because it isn’t worth risking losing 1000s of words over (which has now happened twice). So, in my defense, I’m not only lazy, I’m lazy and inhibited. 😀

So, blog QQ out of the way, I’m now in the Final Semester of law school. Yep, since last post I’ve finished up J-Term (for the last time)! So now I just have one more go-around with this place and then I’m done and gone. Spoiler Alert: I have zero intention of remaining in this area – though in fairness the East Coast probably doesn’t want me here either. Of course life happens, so who knows what will happen. Right now I know I’ll be here until the end of June or July, and I can’t even tell you for certain which of the two it will be – so yeah, who knows (though as I sit here listening to my loud-ass neighbors who enjoy hitting the wall with sledgehammers, June sounds kind of nice). As for school, I’m kind of running out of novel things to write about, this is the sixth semester – or if you count our little baby Winter Terms the ninth term.  Either way, it’s a lot of law school. That said, I’ve still managed to fill my third year up to the freaking brim (see my post on #3LOL and why it’s bullshit – at least for some of us). Despite all my incessant infantile whining last semester, I went and made this semester worse. Thus, I’ve realized that I’m 1) a masochist 2) a moron or 3) both – I’m banking on #3. Things started off well enough – I even scored a personal victory and dropped a class I knew would be too burdensome – and then proceeded to add a class with even more credits right back in. Still, the number of credits is a piss-poor measurement of the amount of time a law school class will require. For instance, I have a 3 credit class this semester that will involve 3-4x as much work as my hardest 4 credit class will. Last semester I had a 1 credit class that took up more time than a 3 credit class (seriously). It’s better to just go off the professor than it is the number of credits. The TL;DR is that I said I was going to try to have a light final semester, and yeah, I failed – I’m nearly maxed out on credits and I’m still an RA – and now a Senior Editor with my journal on top of that. Truth be told I should be working on RA stuff right now rather writing this post, but shhhhhh, shhhhhhh.

On the positive side of things, if you recall from last time I was really worried about my Tax exam from last semester. Well, turns out I did just fine. As in, I did even better than I ever possibly could have imagined I would do. As a point of comparison, I’ve had a “Low Pass” in a class, at HLS this is the grade right above “F” and is kind of like the scarlet letter. People fuh-reak out about the dreaded “LP.” It’s not caused me much issue as of yet, but I digress. I have thus submitted a “Low Pass” quality exam, and know what it looks like – and I have to say, I thought my Tax exam was way worse than my LP exam. I’m talking way worse. Yet I did great (oh those wonky law school curves). This means that my tax professor either took pity on my kindergarten level exam, or that mostly everyone else also did really shitty and thus the curve was awesome. So I went from trying to figure out how I was going to explain my first “F” since 9th grade to being really pleased with my grades. That was cool. Thanks flying spaghetti monster. I don’t have my J-Term grade back yet, but I’m not too concerned about it – and to be honest at this point I’m not too concerned about grades in general. Maybe I should be since I have no job yet, lol, but I gots’ muh Master Plan.™

Outside of law school and its life-consuming craziness and fabricated pretentiousness and bullshit, things have been a little rough in the personal life sector. Though one counterpoint to that has been that winter has been weirdly mild so far. Actually, while our first winter out here was the worst for the area in recorded history, the two subsequent winters haven’t really been that big of an issue. That’s not just in comparison either, I mean just as a baseline they haven’t been rough. In fact, we’ve seen a whole lot more of this: 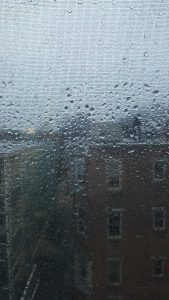 …than we have snow (good ole’ Nor’easters). Of course now that I’ve said that, as soon as this gets posted a solid 50′ thick sheet of snow will fall from the sky and level everything in a 300 mile radius [EDIT: It did snow, but far less than 50′ – actually not even 5″]. Either way, I really need to get some new shoes as my current shoes are falling apart – and I mean that literally, water gets in through the bottom of the shoe because I’ve worn them all the way through the sole, but that’s unsurprising for me. We did try to get me some new ones today (Sunday) when we returned some that didn’t fit, but alas they had none I liked in the size I needed.

Anyways, another fun thing is that we have adopted our third puffin (#1 Here and #2 Here)! It was Pig’s turn this time around, and he went with the awesome and fitting name of Grubbert! 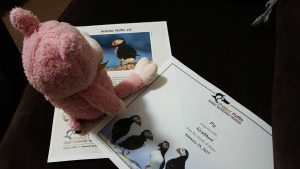 Grubbert is apparently a super sneaky 19(!) year old puffin who is hard for the researchers to keep track of. Pig says this is because, like a grub, he is probably very good at hiding (FYI: Grubbert’s sex is unknown, he/she’s just that sneaky)!

I’ve also been regularly partaking of beer since the holidays – as if that is any surprise. In fact I think I’ve had a beer almost every single day this month. FIL sent me some and then I’ve gotten a couple of 12 packs on sale, so I’ve had a decent stock lately. We recently filled up another mason jar full of caps. Here are the boys helping me sort through them. 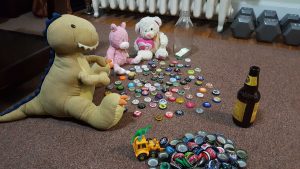 I basically have a two-part system. I have one large mason jar that I just stick each bottle cap in once I’ve opened the beer. I then have a second milk-bottle that holds unique caps. So each time the mason jar is full, we go through it and pick out the unique and/or less damaged duplicates and put them in the milk-bottle. The duplicates we give away for arts and crafts or for other peoples’ collections, and then the damaged ones we recycle. I’d like to keep them all (sans damaged duplicates) in order to make a bar-top (under glass) someday, but right now we just have no space for that many caps, so we just collect unique ones (kind of like Pogs: Alcoholic Edition). Pigsten is a big fan of the collecting and organizing. Oh! Speaking of Pigsten he recently acquired another mineral for his collection, a big piece of quartz! 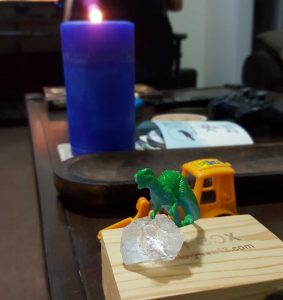 Grandma Meem had ordered SB a candle – seen above behind Pigsten – for Christmas (but due to incompetence – not Meem’s – it took a month for us to actually get it) and the quartz came with the candle. Pigsten cabbaged onto that real quick.

So, that’s a pretty good snapshot of what’s going on in Taco land. I’m in the final semester of law school, but it’s not getting any easier (in large part due to my own ability to prevent things from being easy – it’s like disease or something), and life outside of law school is still as weird and wonderful as ever. On the whole, I think I’m very much at that point where I’m reading to move on to the next chapter of my life, and as such am getting pretty frustrated with all the stuff I still need to do to get to that next chapter. If you’ve been following this blog (or even just reading this post) you’ll know that I don’t really know what the next chapter is yet, but that doesn’t mean I can’t be excited for it. 🙂

I suppose I should get to work on other things though, so I’ll end this for now. Next time we meet I’ll probably talk about SB and Valentino’s birthdays 😀 ! I’ll also likely whine a bit more specifically about this semester since I’m only about one and a half weeks into it right now it’s kind of hard to complain with the appropriate amount of emo-darkness. If one is going to whine, then one must whine. Now I’m off to get some school work done. 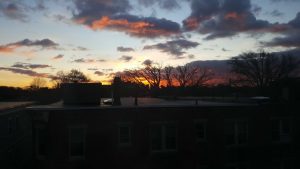 Pretty sunrise photo courtesy of SB – because sunrise/sunset photos are always nice, even if not particularly relevant.

Until next time,
Taco