[Quick administrative note: As it’s been 7 million years since Dinosaur Bear was fairly active you might want to check your email settings to ensure the post notifications are coming through. I’ve changed some back-end stuff to try to prevent servers from constantly putting Dinosaur Bear post notifications into Spam folders, so be sure to add the email you receive to your contacts list if it ends up in Spam! Also both the About Me and Who’s Who? pages have received updates since we last spoke.]

Wasn’t sure I’d make it back for another post before the end of 2021, but here I am with another short-but-sweet one! The Holiday Season is on us once again, and yes, while Big Rona is still around (which again Dinosaur Bear predicted) there’s still plenty to be thankful and celebratory for. This Holiday Season is going to be a bit of a different one for yours truly, but that doesn’t mean it won’t be exciting! Of course, as they say, the more things change the more they stay the same and if anyone is indicative of that it’s Little Friend 2.0. Yes, as has been the case since Christmas 2008 Little Friend (now Little Friend 2.0) has joined the celebration with his trademark decorations. 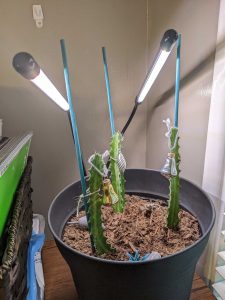 He’s also basking in his fancy new LED plant lights. His new residence at Meem’s house is shaded due the massive amount of tree and plant growth that consumes the house, so I spoiled him with some 21st century lighting. I think it goes well with his ornaments. If you’re curious what Little Friend looked like back in 2008, here’s a photo of him then. 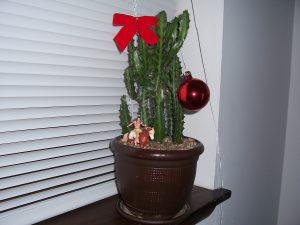 If Little Friend 2.0 looks a bit, ehm, smaller it’s because he is (for now)! Little Friend is a tale of a phoenix rising from the ashes if there ever was one and he has taken many forms across many places since 2008. He’s been itty-bitties and also 6.5′. But despite his most recent changes, rest assured, Little Friend 2.0 is still Little Friend (and Little Friend 1.0 also still exists, just with SB now).

The Boys, for their part, are just as excited as ever for this Christmas. That’s probably due in no small part to the fact they’ll get to spend it with Grandma Reem (and me, but I don’t matter as much, lol) and they will have – I think – their first ever Christmas fireplace experience. 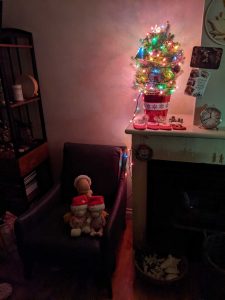 Can you spot Pigsten and company?

Anyways, I just wanted to say Happy Holidays and thank you for being a member of Dinosaur Bear’s Platinum VIP Diamond Plus Signature Elite Admiral’s Club™ despite the relative dearth of posts this past year. Oh, you weren’t aware of your membership status? Don’t worry about that, your credit card has been charged with no effort on your part!

For a little bit of Christmas tunes in the spirit of my musical sign-offs, here is:

Sting’s performance of “Gabriel’s Message” just so happens to be one of my favorite songs from one of my top 2 favorite Christmas albums, A Very Special Christmas (1987 original album). The other album is Tran Siberian Orchestra’s Christmas Eve and Other Stories, if you were wondering.

So Happy Holidays everyone! I hope to be back in the not-too-distant future with a bit of a more introspective post, but for now enjoy the festivities! Speaking of which, I need to go wait on my alcoholic beverages to be delivered to my front door, ah the benefits of living in actual civilization. 😀 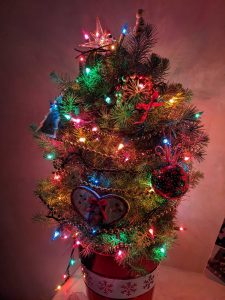