I SAW MY FIRST SQUIRREL TODAY

So today was the last day of my first class, and I am now really regretting the lack of studying I did for the final exam. I am a poor studier at home, therefore it is not surprising that I am an even more horrendous studier 4300 miles from home. But its over, and I dropped off my two books ..and picked up 3 more for the next class which begins Monday. Sunday will mark the half-way point for my time in Denmark, and I’m neither really “sad” or “excited” about that, as there is still so much to see and do.

After finishing up with school-related stuff, I came home, grabbed a sandwich (still eating that free bread from Sweden, which is AWESOMELY good), then headed out to Carlsberg Brewery, and yes I bolded that specifically because it is a brewery. I had been planing on going for awhile, and going as a form of celebration for finishing my first class seemed like a good enough excuse. Someone from my kollegium wanted to go as well, so we headed off to catch Bus 18, which goes way into Western Copenhagen, a land completely foreign to us Northern/Middle city folk. The bus ride was long, very long, as construction slowed us to a snails pace and as such the bus was extremely packed. But we made it! At first we thought we were lost, but then we realized that Carlsberg takes up multiple city blocks, in fact you could even argue that it is a city within a city. I won’t drone on about Carlsberg’s history, as a more thorough account can easily be found on Google, so let’s just say that they were very important. As we approached the brewery, I reached for my camera to grab a picture, only to realize that I had charged my battery, but had failed to reinsert it into the camera. Luckily the person with me had two cameras, one small digital one, and one larger fancier one. She let me use her digital one, so hoorah for company, otherwise I would have been S.O.L. Carlsberg was really cool, and while the historical aspect of it was nice, I think the 2nd room on the tour was the best: 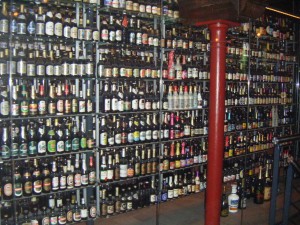 It is the world’s largest beer collection, in total numbering around 20,000 bottles of beer. Yeah, I couldn’t help but wonder how many people would die singing those down to zero beers on the wall. After going through the tour (where I fed one of the Carlsberg horses, Marcon!), and seeing the still functioning part of the factory, I headed to the bar, where I took advantage of the two free beers that came with the tour. Naturally, I got a Carlsberg Special, and a Tuborg Classic. Seen here is the Tuborg, as the Carlsberg was consumed so rapidly that I didn’t get a good picture of it.

Yes, it was extremely good, they both were. Beer on tap in Europe, how could it not be good? After jivin’ my skivies’ in beer land, we decided to walk to the somewhat nearby Frederiksberg Palace, which used to be one of the many royal palaces, but is now an Army Academy. This was sort of on a whim, since we were in the area, but I am extremely glad we did, despite the dropping temperature and approaching rain the area (which also included the Frederiksberg Gardens) was absolutely beautiful. In fact, since I updated my theme for WordPress and lost all my pictures, I changed my header over to a view taken in the garden. Anyways, right before we got there, my 2nd camera died, as the battery had been low to start with. Luckily the 3rd camera was still going strong, though it had a low battery as well (Lesson learned about Cameras). Once it started to sprinkle and we almost left, but ended up staying, which was awesome because: 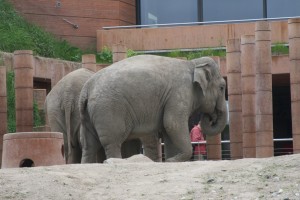 Yes, Elephant friends. After walking around, I found out that the Zoo and park run parallel to each other, and thanks to a 2007 renovation you can see into the ElephantHus (House) from within the park. I was pretty freaking excited, since by this point I had also seen about 15 trillion boid friends, though the Swans are mean and can be scary as hades since they are HUGE here. After meandering around some more, we headed out, and I figured out how to get us back home by taking a bus route that was completely foreign to me. Luckily I’m learning more about the city than most seem to be, though I can’t actively summon the information until I’m on the ground and need it. I really think that getting epic lost for an entire afternoon oriented me in ways that the other DIS students haven’t had a chance to experience. And of experiences lead us straight into:

The (Not so bitty) Tidbit of the Day: Living in a Foreign Country Where you have no Understanding of (Or even prior exposure to) the Language.

When I first got here, I was really prepared for the worst, having had no experience with Danish. In fact, I couldn’t have picked Danish out of a list of languages to be honest. And to be even more honest, I still can’t pick Danish out between Swedish and Norwegian, but there’s a lot of overlap. The truth is, its really not so bad. And no, not as many Danes speak English as all the happy guides and interwebs would have you believe, I’m convinced that 95% number is absolute b.s., but many do, however 99% of the time they don’t use it (naturally, why would they?). So, wondering in a sea of noise where you can understand nothing might seem a little bewildering.. well, for me, its awesome. I enjoy being able to walk around in rambunctious silence, I enjoy being incapable of deciphering the conversations around me. I feel like for the first time in my life, I can walk down a crowded street and truly listen. While it is true that my meager knowledge of German has helped me somewhat (Danish has Germanic roots), its only increased my understanding by about 5% at most. Oddly I seem to do better than many of the people here in deciphering things, but I think that’s because so many people ignore the ever-so-important context of what’s being said or read. You’d be surprised how easy it is to get along speaking only a few words such as “Thank You” “Excuse Me” “Yes” and “No”. So future me, when you think back to this, whenever you may read it, remember just how awesome it is to walk around in a roar of silence. 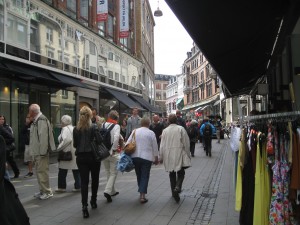