The time has come. The deed is done. The journey has come to an end. 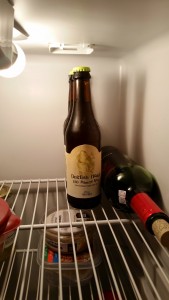 The 120 Minute IPA awaiting its destiny.

I’ve been alluding to this post for some time now, and I’m happy to report that I can finally write it. Yes, as of last Tuesday (4/14/15) I have had all of these amazing beers. 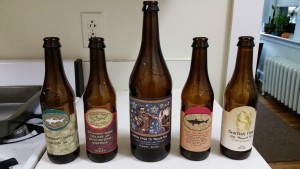 Boy, what an adventure it has been. Its involved everything from the single most expensive beer I’ve ever had, to last-minute solo voyages down into Boston just to find a beer.

I’ve mentioned some of this elsewhere, but since this is a celebratory post, let me give these amazing brews a bit more of a back story. All of these are from esteemed the esteemed Dogfish Head brewery. Dogfish was founded in 1995 by a one Sam Calagione (a friend of Jim Koch) in Milton, Delware. Sam is well respected in the brewing industry, and Dogfish is known for is eclectic and quirky approaches to beer that almost always end up being delicious. Their flagship line is their IPA family. Most people list these as the 60 Minute, 90 Minute, and 120 Minute IPAs. However, as I learned, the full family includes 60, 61 (Sixty-One), 75, 90, and 120 varieties. (Its worth noting that the 90 Minute IPA has been referred to as “possibly the best IPA in America.”) Now that I’ve had them all, I can comment on each of them, and the “family” on the whole. 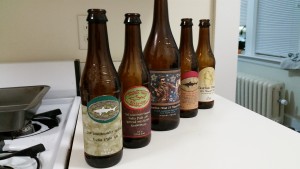 As Tristen would say, “Rexy.”

I’m going to be a little bit more hostile than normal here, and start off by saying that if you think you don’t like IPAs then you’ve probably had bad IPAs. There are IPAs, then there are IPAs. These are most definitely IPAs. I try not to be too massive of a beerfag, but this is one place where I firmly put my foot down and say that you have to try these beers, all of them, before you can say you definitively dislike IPAs. If you try all these IPAs and hate them all, then I would never again question your IPA taste. I am a reformed IPA lover. Many years ago my first IPA was the Dragonfly IPA from Upland Brewing Company. I hated it. Absolutely hated it. Many years later I had it again and it wasn’t half bad. That said, the Dogfish Head IPAs make it look like Pißwasser.

These are, hands down, the best IPAs I have ever had.

However, there can only be one, and so even within this powerhouse family of IPAs I took myself to town trying to figure out which one I liked best. Based on all my posts leading up to this point, the result might surprise you.

60 Minute IPA – Lots of fresh hop oil flavor, very juicy with citric and bitter herbal tones. Solid maltiness holds up to the hops well with a dough toasted grain mix. Touch of nutty yeast with a slight warmth from estery alcohol. Finish semi-dry with a long lingering bitter finish from the hops. An ideal IPA, very drinkable and very flavorful. By far the most drinkable of the Dogfish Head IPA offerings. This might be why its the only one of the bunch to be offered in a six-pack. You can definitely tell that the 60 forms the “base” upon which the Dogfish Head IPA pyramid is built.

Sixty-One (61) IPA – This one is named slightly different as a way of differentiating it from its brethren. Sixty-One is actually the 60 Minute, just brewed with Syrah Grape Must, which increases is alcohol content slightly and gives it a fruity grape flavor. It tastes like its smells, a fruity, sweet, and earthy hop forward taste with big notes of Syrah grapes. Citrus hops with juicy notes. Grassy and floral hop notes. Big taste of grapes intermingled with the hops. Bready malt with sweet notes of caramel, grains, biscuit, and yeast. Very juicy with a laid back bitterness. A very interesting and good taste.

75 Minute IPA – This is a combination IPA. It takes the 60 Minute IPA and the 90 Minute IPA and mixes them together during the brew processes, then adds maple syrup to the mix. Like the aroma hints at, it has a a zesty, fruity, and fairly earthy IPA taste with a nice kick of sweet syrup. Mix of hops upfront with earthy notes of grass and spicy pine. Juicy citrus hop presence with notes of orange rind, lemon zest, pineapple, grapefruit, mango, and some apricot. Sweet and toasty malt presence with notes of caramel, toffee, yeast, biscuit, and toast. Sweet notes of the added maple syrup come through as well. A big and nicely balanced taste. Aside from draft its only offered in a 1 Pint, 9.4 fl oz. bottle (firkin).

Almost as interesting is the beer itself is its label. Originally this beer was called “Johnny Cask – 75 Minute IPA” and it featured a drawing of Johnny Cash tapping the keg. Well, despite Dogfish Head’s offer to pay, Cash’s estate didn’t like that too much. So, Dogfish Head changed the name to 75 Minute IPA, but as a good-natured middle-finger to Cash’s estate and also just to be funny, they kept the image exactly the same except they drew a Groucho Marx getup on Cash’s face. 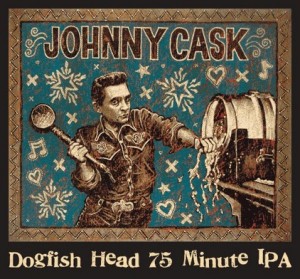 And here is a close-up of the 75 Minute IPA as it currently exists: 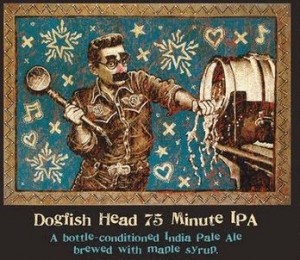 In many ways this makes me love them even more.

90 Minute IPA – This beer is very “juicy”, with a big a hop punch. There is lots of bitterness and a ton of hop oil flavor from front to back. Very smooth with a thick malty body. Nice cake like maltiness in the middle with a ripe fruit and alcoholic kick in the end, finishes a little sweet with lingering bitter hop tones. Smooth upfront, big and chewy in the mouthfeel with a creamy palate. Hops are in your face with prickly, bitter, herbal, pine, citrus rind, salt, slick viscid hop oils, raw leafy hops, earth, resin-like all in a complex and intense medley of characters. Malts are a bit masked by this and take a backseat for most of the drive with some bready flavors and a lot of backseat driving as far as the mouthfeel goes. Alcohol is very present, with a warming feel in the head and fumes in the breath. Light notes of toasted malts / caramel as the beer warms. Dose of yeast in a drying finish. This is the “tipping point” in the IPA family between drinkable and “BAM.”

120 Minute IPA – It really is the most complex beer I’ve ever had. An explosion of juicy, bright tropical fruits flow into your palate. Its important to take initial sips and let them rest on the tongue for a few seconds to warm up and soak in. The malt takes a back seat as you would expect, with the bitterness of the hops pushing all the right buttons.  It is difficult to make a balanced IPA, but this one nails it. I don’t like my IPAs to be too bitter or resinous, but I also don’t like them to be completely floral or citrusy without any bite to back up the flavor. They really achieved greatness – it’s got the perfect bitterness, a subtle but present floral taste that could easily be missed, and the citrus and tropical flavors launching a full-on assault of the palate. The taste of the 120 Minute IPA is simply too complex to be overstated. Sold as a (very expensive) 12oz single. This is the priciest beer I have ever had the luxury of drinking. That said, you will only need one. Trust me. One 12oz bottle of this is the equivalent of 4.5 Bud Lights in alcohol content and about 50 of them in taste. 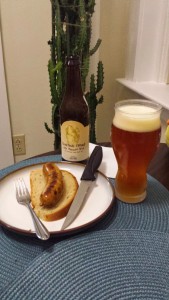 My first 120, coupled with none other than a Dogfish Head bratwurst! [Opinion Forthcoming]

So, now that I’ve shared a bit of information about each IPA, how do they compare to one another?

Well, I have to say, its really hard to compare these beers. Yes, they are all one family, and yes each of them is, at some level, like the others. I have to stress that each one of these are great beers, and compared to normal swill they stand head and shoulders above pleb-beer masses. That said, I did promise to rank them based on my first experience with each of them.

The three biggest things I considered when ranking these IPAs (since all of them were awesome anyways) were:

Drinkability (D)– How smoothly the beer goes down. In other words, can you drink multiple beers without too much burn, unwanted bitterness, or getting wasted.

Flavor (F) – The complexity of the flavor, for simplicity’s sake this includes everything: aroma, taste, texture, etc.

Uniqueness (U) – How unique the overall experience of each beer was; considering both the factors above as well as harder to quantify sensations such as the way the beer changes as you drink it.

–REMEMBER- I these three factors are between the beers being ranked, NOT against *all* beers.

I’ll assign each beer a score of 1 – 10 in each category, then I’ll average the three scores together for a final score.

So, by that ranking we end up with:

I have to say, when mentally mapping this out it looked a lot like that ranking. I think that overall in a single-beer to single-beer death match I have to declare the 75 Minute IPA the winner. There was just something special about that IPA, maybe it was my first beer with maple syrup, I’m not sure. I also think the fact that it blended the 60 and 90 was a strong point. The 120 Minute IPA came in second, and is undoubtedly the most unique beer of the bunch and packs a load of flavor, but its raw strength ended up hindering it just a little bit. The 60 and 90 Minute IPAs were just too close to call. The 60 is more drinkable, but as the “base” of the family its less unique and flavorful, whereas the 90 boasts more flavor and uniqueness, but looses out on drinkability. As such, its pretty simple. “More than 2” = 60, “2 Or 1” = 90. Rounding out the bunch for me was Sixty-One (61). This was a good beer, don’t get me wrong, “last place” here is better than most beers. That said, I felt like the grape musk was underutilized in the mouthfeel and as such it didn’t stand out enough from its direct-brother, the 60, to pull ahead of it. Also, the added sweetness decreased its drinkability below that of 60, so Sixty-One (61), while a good beer, doesn’t fit into the progressive scheme of the family as well as its siblings.

But seriously, all of these are beers you need to drink for yourself. It really wasn’t until I had had all of them, that I began to understand how they related to each other.

Fortunately for me, I still have one more 120 Minute left in the refrigerator. I’ll probably save it for the end of 1L, as those are not a beer that one drinks often, lest you go broke and become a raging alcoholic. In the meantime I’ll probably stick to the more affordable, and easier to find, 60s and 90s. (The Sixty-One (61) and 75 require trips all the way into Boston, sadly).

And there we go, my long-promised Dogfish Head post! I have now completed the family and can drink them recreationally instead of as a project. 🙂

Don’t think that this is the last of Dogfish Head and I though. The next challenge/project for me is none other than their Ancient Ales series, where they literally recreate beers that are thousands of years old based on chemical analyses of residues from various containers. I am, as always, quite excited to try some new (very old) beer! 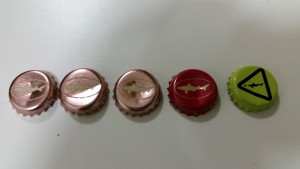