This post means that my blog won’t be entirely dead for the duration of my time in Colorado, yay! In fact, I have a bit of a plan to make sure that at least something gets posted while I am out here.
I’m calling the idea the “Denver Check In” and as you can see, this is the Denver Check-in Introductory Post. Basically, I am very busy. I work 9 – 5, M – F (nothing exceptional, I know) but I am also taking three concurrent classes through the Harvard Business School. Additionally I am trying to get out and about to explore, because let’s face it, you can blog from anywhere with an internet connection, you can only explore where you are.

Which actually gets me to my next point. The internet in my apartment is horrible. No, I am not just saying that, it is objectively horrible. It is 1/63th the speed of my internet back home. Yes, 1/63th.
Here’s why. So my apartment is actually a condo, which is either owned or rented by 1L Roomie, I am not entirely sure. Either way, it’s a condominium high-rise. Twelve floors in total (I’m on eleven). As with any condominium community, there is a Homeowners Association (HOA). Anyways, one of the “perks” for this building is that the HOA pays for and provides internet for the building. I put “perks” in scare quotes because the internet freaking sucks.

What they did, was purchase a 150mbs line – which sounds good in theory. But then, what they decided to do rather than hardwire the condos is set the entire thing up as WiFi. Yes, WiFi for a 12 story, square building. To make matters worse, they didn’t even put broadcast points throughout the building. No, they put in a few central broadcast points and then, and this is great, they put in signal extenders. Signal extenders. So what this means, is that overall, the WiFi sucks because there are not enough access points and 150mbs is not enough for a 12 story building. More specifically, mine sucks ass because I am in the corner room, of a corner apartment, on a floor that only has a signal extender.

What this means, in sum, is that my internet doesn’t even work half the time, and the other times it’s only operating at about 4x the speed of dial-up. Dial-up.

This does not make for good blogging. Actually, it doesn’t make for good anything. I can’t Skype SB from my apartment, I can’t play vidya games with friends from my apartment, and I also can’t do my coursework from my apartment. Hell, I can’t even browse Google half the time. Subsequently, if I try to do a media-rich blog post (as this blog normally flaunts) it takes me as much as five minutes to upload one single freaking picture. Yeah, ain’t no one got time for that, especially yours truly.

If you are wondering how people in the building live with the crappy internet, most of them don’t. A lot just say “Screw It!” and get their own service. 1L Roomie is not one of them for some reason.

So, the idea behind the “Denver Check-in” post is exactly that, a check in that is limited to a max of roughly 1500 words. Don’t expect huge epic posts with lots of colors. My goal is to “check-in” once per week, but there are no guarantees. Within each “check in” I’ll highlight what has been going on that week (be it about beer, exploring, work, or beer), and try to include at least one photo from that week. I know we both like pictures, but I am not spending 600 hours uploading pictures, nope. [Remember I have to download it from my phone, then upload it to my blog – so it’s really like 10 minutes per photo]. Nor am I going down to the common room to write blog posts, not when I’ve already been forced to go there just to Skype, play games, or even do homework. The common room is prone to human kids and loud people. Two of my least favorite things in the world.

So there you have it. The “Denver Check-in” has been explained. Look for them to start appearing in the near future. They’ll be sequential, and lack cool titles – so it will just be: Denver Check-in #1, #2, etc. and then a word describing something substantive within the post.

I figure it’s better than nothing. 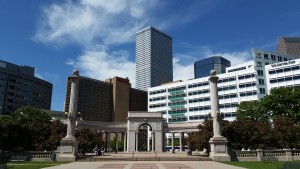 A view of part of downtown from Civic Center Park.