Today (the day I actually write this, not when it gets posted) marks two weeks of me being in Denver. My job is actually a 10 week appointment, but based on the way things fell I’ll be in Denver for just a little bit more than 10 weeks in total. Still, I’m just under 20% of the way through my time here. And while I realize I still have a long way to go, it is interesting to see how relatively quickly time has been passing. I am not complaining, don’t get me wrong. While I am enjoying my time here, and I do love exploring, I miss home. So a quick passage of time, filled with fun and challenging events is pretty much my preferred agenda.

So what has happening since Check-in #1?

Well, I put in my first 5 day work-week. Due to Memorial Day my first week was really only 4 days, so this was my first true Monday – Friday grind at this job. Monday through Wednesday were relatively slow, as I primarily focused on some broader issues. On Thursday things really picked up. I got back my first report, and the feedback was just “ok” – I made one relatively large error dealing with the Federal Rules of Evidence that brought the rest of it down, but it was really just that one mistake. I got chewed at a bit over it, but it’s a mistake I won’t be making again. As soon as that happening, I got hit with another project, and boy, its a doozy. I actually don’t fully understand the question, I’m hitting a brick wall with my research, and to make things even better the attorney that gave me assignment dropped it on my desk and then left for a week with no other instructions than “Have this on my desk when I get back.” So the start of this coming week stands to be fairly interesting, especially since I am waiting for feedback on a letter to opposing counsel I drafted – and if that goes poorly, then I’ll have to spend an entire day fixing that on top of everything else.

So yeah, the work week was definitely back-heavy, which I might actually prefer – though it did leave me very drained on Friday.

But, as mentioned before, work isn’t everything out here in ole’ Denver, I also have classes! They formally started on Wednesday, and boy they are eating up a bunch of time – which was the idea, but I didn’t anticipate just how much math would be involved. If you weren’t aware, me and math have a violent history and don’t get along so well. In fact, the only class I have ever failed in my life, and really one of the few things I’ve ever failed at in general, was Algebra I in high school (I failed the first semester and passed the second, go figure). Now, to be fair, my teacher, one Jeanie McBride, was pretty much the worst teacher you could ever imagine. But, to be even more fair, I can’t blame her entirely, I’m just bad at math. To the point that when I passed Algebra II with a D- it was a joyous day indeed. Oddly enough I seem to have gotten better at Math over time, I got a B- in my undergraduate math course, which is the best math grade I’ve gotten since an A in Junior High math.

Still, the math in these Harvard Business School courses is hard math, and it’s math that is being presented in ways that I am not used to. When this math is coupled with bad internet it makes for a pretty piss-poor experience overall. To the point that I’ve thought long and hard about just dropping the classes before I get charged. I technically have until the Wednesday of next week (not this coming week) to do so, so we will see how things pan out. I did finish my first tests in each class with 90%, 90%, and 80% – so it’s not like I’m currently failing or anything. I just don’t know if I have the patience to deal with it.

On the fun side of Denver, I stuck to my “Spend One Day Per Weekend Exploring” oath, and boy did I explore, in the end about 17 miles of walking and a lot of biking, busing, and even some training (like.. via train, not training for something) on top of that. I actually beat my all-time step record, even surpassing SB and I’s crazy day in Seattle last year. The day started off with a swim, which I’ve made a Saturday morning thing. Then it was off to explore the Denver Art Museum, because it was one of their free days (which I try to hone in on, for obvious reasons). On my way to the museum the sunny skies proceeded to promptly dissapear and it was pretty obvious that a storm was rolling in off the Rockies – just my luck.

Fortunately, 1L Roomie has let me borrow one of his B Cycle memberships and I was able to beat the ran thanks to the bicycle. 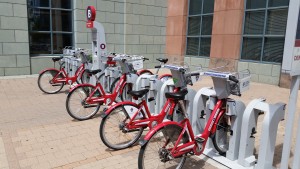 This is what a B Cycle station looks like, this is actually the one closest to the art museum. You just scan your card and are on your way! The downside is that you are limited to 30 minutes otherwise you start to get “overage” fees, but you can always just check a bike in and right back out again as a way of working the system. Also this picture took like 15 minutes to upload so revel in the bike-ness.

Once inside the museum its starting pouring. I mean like, crazy rain and wind. Then, somebody pulled the fire alarm, or opened a door, or the system malfunctioned, who knows. And so they started evacuating the building – right out into the rain. So I did the true Taco thing and hid in the galleries, because screw that noise. It turned out to be nothing, and I wasn’t soaked. After perusing the museum, which was a really cool building and layout (Joan Miró was the visiting exhibit) – even if the art itself tended to be a bit too contemporary for me, it was out into the new sunshine to explore the Denver People’s Fair, which had lots of music, food, stands, etc. I didn’t spend any money, because I’m cheap, but I did enjoy walking around. After that I walked up to the Larimer Square Chalk Art festival, which had some AMAZING artwork, even though many of the artists had to start over following the rain. Following that I realized I was very near the Auraria Campus Area, which is where University of Colorado – Denver, Denver Community College, and Metropolitan State University of Denver are (talk about close quarters!). It was a pretty cool area, if not initially underwhelming – but it got better the further south into campus you went. It was also freaking deserted, which was kind of creepy.

While down there I checked out a CU-owned apartment complex I was considering (and I’m glad I passed up on, though I bet the internet was better) as well as got a sort-of up close view of Mile High Stadium. After that I role my first Light Rail up to Union Station, then took the free Mail Ride Shuttle back to a B Cycle station and headed home.

After a brief recharge (for both me and my phone) it was off to Argonaut liquor store, a HUGE liquor place about .8 miles away. I purchased my first bit of beer.. 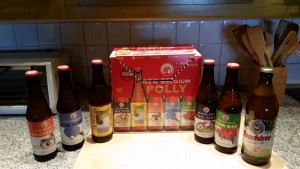 ..(amounting to 13 bottles, lol) and then bemoaned that fact as I carried it all the .8 miles back. Of course I can’t complain too much, it was beer and I did beat the rain. I was really worried I was going to rained on the one time I wasn’t carrying my umbrella, but I was fortunate to stay dry, even if my arms really hated me by the time I got back to my apartment. I tell you what though, actually having an elevator after walking 17 miles is a very nice thing, and I can’t say I miss that aspect of my building back in Boston.

For the beer itself I went with a New Belgium sampler (New Belgium is located in Fort Collins Colorado) as well as a single of a peach wheat ale, which I had never seen before – and I love peaches. 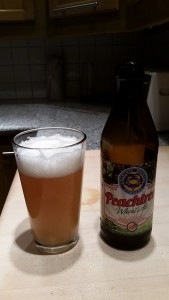 It was an interesting beer, the peach was strong, but the beer was really, really frothy. I’m not sure why. It was also massively unfiltered, which was kind of odd. Overall it wasn’t quite was I was hoping, but it was peach, so it gets points for that.

Then today (Sunday) was pretty much just classwork day, though I did get everything wrapped up for the week, so all is well moving into week three and all the craziness I am sure it will bring. 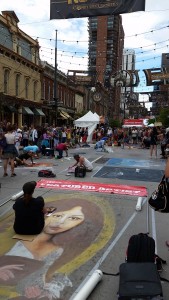 A chalk artist hard at work at the Larimer Square Chalk Art Festival.