So, with the Denver Check-in formally explained and introduced here, let’s get started with the inaugural check-in!

So how were things during week 1? Well, they weren’t too bad. 1L Roomie is pretty cool. I mean sure, he is another human being that I have to live and interact with, but he can’t help that. His girlfriend, who is originally from Mexico, is around the apartment a fair bit, but she is nice and doesn’t really bother me either. By and large he is nice, helpful, and leaves me the f* alone when my door is shut – all of which are nice qualities. He picked me up from the airport which was awesome (and saved me a chunk of change since I really didn’t want to deal with my suitcase on two different public buses I would have had to use a shuttle or car service). He’s also fed more good noms on more than one occasion including homemade guacamole, sweet potato ginger stew, and grass fed beef liver. He is on some sort of interesting “high-fat” diet and makes lots of very noms foods, and I don’t complain at all when he shares with me. He also shares pretty much al l the stuff in the kitchen, yet doesn’t seem to take the food I buy. Pretty much a perfect setup there. Most importantly he has a Keurig coffee maker, and gave me like 30 little coffee pods to get started. He also gave me 8 bottles of beer, all of which are gone.

Those (not already mentioned in this post) beers were: 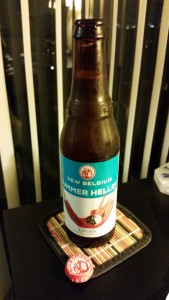 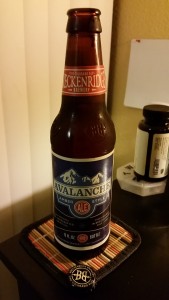 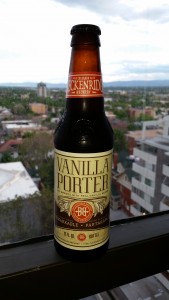 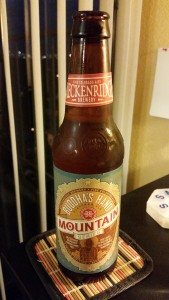 He is also a snowboarder and mountain-biker (which is like.. everyone in Colorado) and a native Coloradoan, so he has lots of suggestions about “outdoorsy” things to do.

I also have my own bathroom, which is worth its weight in gold. Probably not, a bathroom is heavy. But still, it is worth a lot to me.

The building itself is decent. It has lots of amenities (not including internet) such as a balcony for the apartment (sadly not facing West – toward the best mountain views – but I’m not complaining as it’s still a balcony, and you can still see mountains). There is also a semi-heated pool, I say semi-heated because some days it’s warm, other days it feels not warm. A hot tub, which is warm, even if I can’t figure out the buttons (I think some of them are broken). A little gym, which is actually quite nice when I sometimes have it all to myself at 6:30am. A common room with some comfy chairs, some not comfy chairs with tables, a pool table, and a kitchen. There is also an outdoor patio area. The building is also secure with controlled entryways, and there is a building manager on duty from 8-6 M-F, and 8-12 on the weekends.

It’s an older building, and all of the above things are just in average shape. I mean none of it is bad, but it’s not resort level or anything. It is clean though, even if the occasional hot-tub jet and exercise bike seat-raiser don’t work.

So yeah, where I live is pretty good aside from the Ethopia-tier internet.

Where I work has much better internet, but I obviously can’t use that to blog and play games. Well, maybe I could, and get fired. Having a Job > Blogging.

I’m still in the “acclimating” stage of my job, so I’ll comment on it more as I get deeper into the summer (as I write this I’m only 1/10th of the way into my internship). However, most everyone seems pretty nice and chill, even if there is a current of stress underneath. There is of course that one guy who is an asshole, but I’ve never heard of job that didn’t have that one guy. Fortunately for me, I don’t directly work with him, so our interactions are passing.

So I guess I should explain the office setup.

I work within the Environment and Natural Resources Division (ENRD) of the Department of Justice (DOJ). The division is further divided up into several different sections. I am a special one in that I work for two sections, Environmental Enforcement Section (EES) and Environmental Defense Section (EDS). Most interns only work for one section. EES and EDS in the Denver field office have two interns – me and one other person. The Natural Resources Section (NRS) also has one intern, as does the Indian Resources Section (IRS – lol I know it confused me too). So there are 4 interns in total at the office, whereas D.C. has like… billions. The four of us interns share an office, which literally used to be a storage closet, I am completely serious. But it’s really not bad, it’s like 1/3 the size of my apartment back in Cambridge and I have my own desk.

I have a “supervisor” in each section – EES/EDS. However, it’s primarily my EES supervisor who is my “boss-boss.” That said, as a HIGH-RANKING-SUCH-PRESTIGE intern, I basically get lent out to whoever needs me in either EES or EDS. So while I have a formal supervisor in both sections (with EES being my primary) I actually work for whatever attorney needs me and gets to me first. You might not imagine it, but we interns are actually pretty sought-after.

On the first day my supervisor took me and the other intern out to lunch, then took us to get cupcakes. Then on the first Friday we watched a documentary (on uranium mines), had pizza, and then later went to a Happy Hour – which they paid for my two drinks.

And in case you were wondering, those two drinks were:

So that is all I’ll say about work for now. It will obviously be the focus of future check-ins.

As for exploring, Tristen and I have been busy boys. In addition to finding grocery stores, figuring out buses, etc. We’ve been going on bicycle rides (1L Roomie has an extra membership to Denver’s bicycle sharing system) and checking out the city and some parks. Just this weekend we checked out the Capital Building and the Civic Center Parj. We also went and checked out the big City Park (basically Denver’s equivalent of Central Park). We also spent pretty much an entire day walking around Downtown (where I work) and Lower Downtown (LoDo) including stops at the famous Giant Blue Bear Statute and Union Station (where we got some tasty Pigtrain Coffee and watched people playing in the fountain). But most importantly, as Tristen commands I write, we went to the Denver Museum of Nature & Science. We were lucky enough to catch one of their free days, which saved me the 15$ cost of entry. The real reason we went, is because they have a TON of dinosaurs (and Dr. Scott from Dinosaur Train works there!). Manries. So yeah, Tristen loved every second of that (even with the free day crowds), and the other exhibits were pretty cool too especially the wildlife exhibit focusing on bears. Ray! They even had a temporary exhibit about Mythical Creatures (dragons, krakens, etc.) that hypothesized about the origins of such creatures in our cultural mythos. But really it was about the dinosaurs. Res.

I’ve already drawn up a list of things I want to do (based on recommendations and/or guide books), and even started crossing some of them off already! Look for more adventures and general information in the upcoming check-ins. 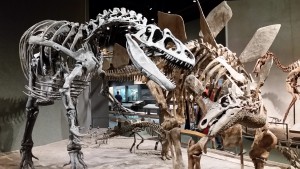