So I don’t have a desk right now. Someone stole it, but they were nice enough to leave money behind.

So I’m sitting uncomfortably in the floor, which has stymied my blogging plans. Once I’ve moved, one of the first things on the list is to reacquire a desk (hopefully much lighter this time).

Each week, normally on Fridays, SB and I go out to get food. We also get a treat to have afterwards, normally baked goods or ice cream. This week we decided to have some Breyers Gelato. This is actually the second time we’ve had it, and we liked it enough the first time to try it again. The first time we had it we tried the Tiramisu flavor, we had the same flavor again this time thanks to all the other flavors being gone. I’m not complaining, we both love Tiramisu and there was actually only two left of those.

This stuff is awesome. I am actually not a huge ice cream person I NO RITE? SUCH SAVAGERY, SUCH COMMUNISM. Gelato is more exotic, but still, I prefer my obesity to come in cake format. However, Breyer really made their mixture of corn syrup solids hit the taste buds in just the right ways. Its better than most shop-made gelato I’ve had (and way cheaper, especially with a sale + coupon).

So if you see it and like either 1. Ice Cream 2. Gelato or 3. Freedom, you should try it. It comes in many more flavors than just Tiramisu, for those of you who don’t like hints of coffee. 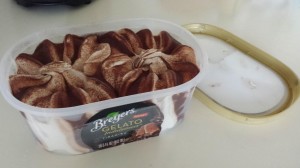 P.S. Breyer, please contact me via email about sending the endorsement check, thx.