So, I don’t have a whole awful lot to say in this post, other than to say that there will be a short break in the usual schedule of Dinosaur Bear.

That’s because, as of this posting, SB, the Boys, and I are away on quite a trip. All in all it will involve around 12,200 miles worth of travel via big planes, a little plane, a train, automobiles, ships, and a boat. Of course those miles are very roughly estimated and in actuality the distance is likely much greater than that as 12,200 is a rudimentary “straight line” estimation. But still, 12,200 gives a nice perspective into just how grand this adventure will be.

At the northern extreme of our voyage we’ll be way up into the Arctic Circle itself, far beyond the point where the roads – even the ice roads – end. But that’s really just one small portion of the overall adventure and I’ll be sure to share the details of the voyage in due time. You can rest assured that between SB and I we’ll accumulate a fair number of photos, as we even bought a second (zoom) lens for our good camera for this trip. I also invested in a decent pair of binoculars (read: more than $20) for the first time in my life – not that that matters much for non-mental photography.

So, given the scale of this adventure it’s no surprise that I return right before 3L starts. As such, you can look for both a blog-o-journal for this trip, as well as my thoughts for the upcoming 3L year sometime in the coming weeks, but I can’t get much more specific on timelines than that. 🙂

For now, I leave with you I photo I took a little over 10 years ago of “that old white mountain just a little south-east of Nome.” 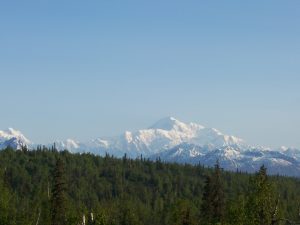