As I sit here it’s about 67° F and sunny, which means that in the office it’s closer to 80°. Our office is a bit of mixed bag when it comes to the sun. You get a lot of it, but it also makes it the hottest room in the apartment and during certain times of the year renders a computer screen nearly unusable unless you close our 600lb metal blinds and as such make the room even more hot. Anyways, I’m not complaining since it’s January, but in addition to the thankful part of me, there’s also a part that begrudges the fact I need a ceiling fan in January to not be hot. Of course my boot is probably making matters worse. On the topic of my broken foot, it’s still broken, but I’m showing good healing progress and can hopefully ditch my crutches and just go boot mode in about four more weeks or so. Not sure of the length of recovery time after that, but having been on crutches for nearly two months at this point I’m more than ready to at least ditch those.

For today’s bout of randomness I’d like to display my most recent round of organizing my beer bottle cap collection. 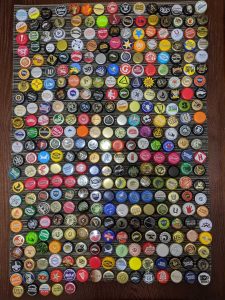 Each one of those is a unique cap. You might think there’s a few duplicates, but there’s several from a brewery that have unique undersides, which makes them appear as duplicates from the top but they actually aren’t. However, to call myself out there is in fact one actual duplicate in the above photo that I didn’t catch until after I took it. There’s also several sodas and coffees in there, so while I guess it’s technically not a beer-exclusive collection, it’s 95% beer. This is of course not a display of all the caps I’ve possessed from consumed beers, these are just the unique caps – so if I get another cap of the same variety I just keep the better quality of the two and recycle or give away the other one. Further, there is obviously nothing to be done for the myriad of canned beers I’ve had. In truth my beer experience will never be completely documented even though I have older beer blurbs, the now (mostly) retired beer list, and Untappd there is always going to be that dead zone between the start of me recording my beers and Untappd (roughly 6 years). Regardless, I think the cap collection is pretty cool. There are a lot of them that are damaged from back when I was a heathen barbarian and didn’t have the tools to properly open the cap without bending it like a person of culture, but alas such is the cruelty of ignorance.

My beer consumption slowed drastically in 2018 and I mean like, dropped by 50% – and that’s because of this: 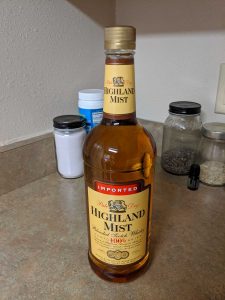 Not that bottle specifically, as that is the cheapest bottle of scotch I’ve ever purchased (about 1/5 as expensive as the priciest one), but scotch in general. Introducing scotch into my drinking profile naturally edged out beer’s undisputed dominance. Now, overall I still drink more beer than anything, but these days it’s definitely a battle of the alcohols between beer and scotch when it comes to what I’d like to drink. Wine has also had a reconnaissance with me since I went to France, but there’s still only a really narrow band of wine I actually like.

We’ve been restructuring our finances around the Taco household due to what would have eventually turned into bankruptcy, so I’ve diminished my drinking on the whole anyways. That’s not necessarily a bad thing though, and if a cheap bottle of scotch lasts all the longer then it makes the good stuff taste even better.

Random change of thought (possibly get used to these as I revamp my blogging style). We got a new printer recently. For the record you can put down Dinosaur Bear’s stance on Epson products as “Worst printers in the world.” Yes that is an official company statement. We decided to ditch inkjet printers due to years of bad Epson printers and also the fact that inkjets tend to dry out when you don’t use them – and we don’t use our printer that much these days. So we went with a laser printer and boy oh boy has it been worth it so far. I had originally decided on a Brother, but it turned out to be morbidly obese even for a so called “compact” model, so we ended up going with HP – another brand I swore off long ago after several dozen near-Office Space incidents with the one HP SB and I used to own. However, knock on wood, so far this HP seems ok despite the fact that it was a headache to get on the wireless network, to the point I was having to modify settings in the router. 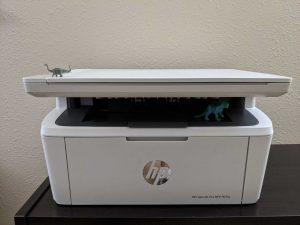 It doesn’t do color because color laser printers are way too pricey for us and we don’t need color very often anyways (I’d much prefer a good black printer that is reliable over a color printer that breaks 75% of the time you need to use it *cough* Epson *cough*). However, late last year I had to send to send some official correspondence to the U.S. Army over a semi-legal battle I am having with them and I had to send it in blue ink due to the Epson’s black port getting clogged after less than a week of non-use, so it was at that time that I decided something was going to need to be done. Meem was originally going to finance most of it as a Christmas pressie, but after I decided the Brother would crush our bookshelf we went to Target and got the HP, so now Meem’s gift has been converted into dozens of movie rentals from Amazon. 😛

That’s about it for now. Beer and printers, good combo. Oh and as a final note on the 61 degrees, Laurence is already starting to plant his spring garden (see the little plants above him). So at least someone is excited about that blazing sun. 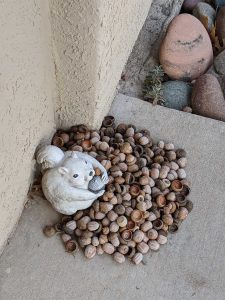 The sign-off song for today is:

The Aviators – No One Will Save You

This song is inspired by a specific character in the Playstation 4 game Bloodborne – which is about one of the most bad-ass pieces of media if you love Lovecraftian horror, nightmares, vampirism, and generally all the things that go bump in the night.