Time for another beer blurb, this time we are checking out an extra special beer that I can all but guarantee you have not had, and may never get a chance to. We’ll also examine Yuengling Light, which is far less exceptional.

Without further ado, the beers.

You’ll notice that I did not link to Beer Advocate for the Sam Adams, that is because it doesn’t have a page. Why? Its an experimental beer, which means it does not exist outside of the walls of the Boston Brewery, well, except for the people who have bought growlers. The second beer is slightly more standard, but it was still my first time having it.

As I mentioned in this post, SB and I visited Sam Adams’ oldest brewery. After the (free) tour you have a chance to purchase some of the beers that they either have on tap or are experimenting with. I naturally chose the experimental beers and went with the Rye Märzen. A Märzen is a pale lager, which literally means “March Beer” in German. These are traditionally strong beers, but lately its more of a flavor style as opposed to being a strictly strong beer. Sam Adams took a Rye spin on things. 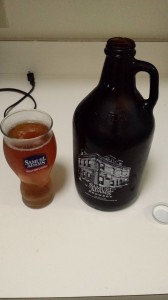 [Big Side note: Want to know what makes a good beer glass anatomy? The Samuel Adams glass above is actually a good example. A good beer glass will have the following. 1.) It will either have a narrow base with thicker glass, or it will have a handle. This keeps your hand from warming the beer. 2.) It will have a wide mouth to allow the beer to aerate and to release more aroma. 3.) It will have an imperfection in the base of the glass (often laser etched) to allow a build up of carbonation that keeps the beer active and fizzy. 4.) The top most portion of the glass will flare outwards, this delivers the beer to the proper place on your tongue (the front, where you perceive the sweetness of the malt) rather than the back of your tongue, which is where you perceive bitter flavors. 5.) There will be a tiny lip around the rim that creates turbulence to release more flavor and aroma as you are drinking the beer. Believe it or not your glass does matter, beer is no different from wine in that regard. Sorry college people with your red plastic cups.]

It wasn’t quite as strong as I was expecting, but it had a nice smooth flavor. Even SB enjoyed it and she isn’t a huge Sam Adams fan. Since the growler doesn’t last long anyways, especially once opened, we went through the whole thing in one night. It turned out to be around 5.5 beers in all, which at a price of 9.95$ I absolutely cannot complain. I really hope this one passes the tests and gets distributed, though I’m sure it will never taste as good as it did fresh from brewery.

Next up is Yuengling Light. 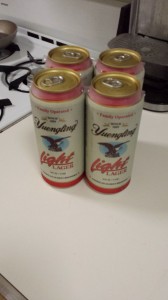 Now, with Sam Adams the night before, why would I get a beer like this? Because it was cheap. Believe it or not I’d never had a Yuengling until we moved to Boston, let alone a Yuengling Light. Now, Yuengling is apparently America’s oldest continuously operating brewery, having been producing beer without pause since 1829. If you are wondering how they made it through prohibition, they produced “near beers” which were beers with very low (0.5% or less) alcohol content. Since they are located in Pennsylvania and an entirely American owned brewery (like Sam Adams) I had to give them a try. I had previously had the regular Yuengling and it was just ok. Now that I’ve had Yuengling Light, I have to say, its just ok. I’m not sure its as bad as the 66 its garnered on Beer Advocate, but its not really memorable. It kind of tastes like Budwesier, which is pretty much the same way the standard Yuengling tasted. I’ll certainly have it again, but likely because of price rather than taste.

So, between the two beers the Sam Adams wins by a huge margin, lets just hope it doesn’t vanish from the face of the Earth. Yuengling Light, meanwhile, will be a nice go-to cheap beer.