Hello all, its time again for another Beer Blurb/Friday night out.

It was an especially long week for both SB and I. Lots of school related stuff to turn in and for me specifically, a lot of organization related stuff popped up. But that’s for another post. We were also sick (me on the upswing, SB still in the midst of it). So we weren’t quite feeling a trip to the level we took last week. Instead we wanted something we could walk to and wouldn’t need to rely on public transit. Given how much stuff we have around us, you’d think this would be easy, but it actually isn’t. In fact, we are still struggling with having so many options to choose from. Its weird, the more we have to pick from, the more difficult it gets. I think there is some psychology there, surely.

Anyways, it was my week to pick (we alternate) and I found a place called Grendel‘s Den. I was drawn to this place because every day from 5:00 to 7:30 all their food is half price. This was reminiscent of the pervasive Happy-Hours in Seattle. There were really weird stipulations with it though, such as you have to spend at least 3$ (no biggie), to you have to sit inside, no patio seating (uh, ok?) and then no doggy bags (uh, what..?). So if you go and take advantage of half-price food, you better be hungry. The good news is that the food is well priced (for this area) and so you can eat for about 3.80$ a person during this time (it doesn’t apply to alcohol though, of course).

We decided to go, it wasn’t a long walk, it was a nice day, and it was half priced. 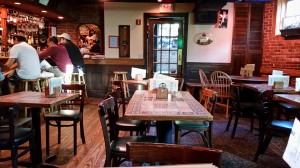 The patio area was above ground actually, but the restaurant itself was actually mostly below ground. It had a nice vibe. For drinks, we went with the following: 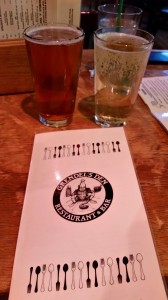 Grendel’s Ale only has three ratings and no real reviews on Beer Advocate, so apparently this is not as common a beer as I figured it would be. I’m not entirely sure if its brewed exclusively for Grendel’s Den or not, but that was my assumption and that is why I got it. Its from the Boston Brewing Company, which is apparently owned by Samuel Adams. It was pretty good, it was sort of a blend between a red and a brown ale, nothing too exceptional, but nothing really bad either. It was slightly above average strength for a standard ale, but I’m not complaining. SB went with the cider, if you didn’t guess that. You also probably guessed which was which in the photo above. I was actually surprised by just how clear the Original Sin Cider was. Of course it was still pretty good, it was very crisp for a cider and not sickeningly sweet, I liked it, SB liked it (obviously, since she finished almost all of it herself since we largely weren’t sharing due to sickness). We actually spent almost twice as much on alcohol as we did on food, just because of the food being fairly cheap and then halved from there. 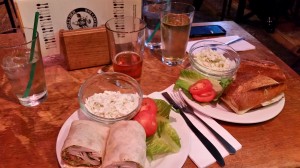 I went with the Sonoma Wrap (Turkey, bacon, sundried tomato-goat cheese, guacamole, arugula, onion) and SB went with the Turkey & Havarti (on a baguette with pesto-mayo). The food was pretty good, though it took our server for-freaking-ever to actually take our food order. She took our drinks quickly, but then disappeared for awhile. Right about the time I was becoming angry, she came back, I think there was some confusion over whether we just wanted drinks or food as well. Anyways, that aside it was a good experience.

On the way home we strongly considered going through a nearby desserterie, but when looking through the window everything looked super rich, so we passed and just went to our normal market for treats. I also picked up a six pack of: 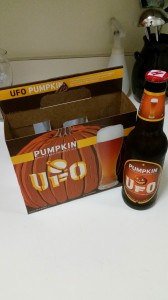 (No I didn’t drink 5 beers since coming home, I was too lazy to take them all back out of the refrigerator just to take a picture)

I’m quickly becoming a big fan of Harpoon’s UFO (Unfiltered Wheat Offering) series. Though this wasn’t my first time having a UFO, it was my first time having their Pumpkin Ale. I like UFO, I like Pumpkin Ales, what could go wrong? The answer? Probably a lot, but nothing did in this case, it was very good. It was a bit on the “thicker” side for a Pumpkin Ale, but nowhere near a Pumpkin stout. Now there is an idea, a Pumpkin stout, I don’t think I’ve ever seen one. This UFO Pumpkin actually had a nice blend of spices, so its a solid Pumpkin Ale in my book. I typically try to avoid Pumpkin stuff (and wearing Jeans) until October, but it was a long week and I’m in New England where Fall comes early. 🙂

I’m adding this after the fact, because I had it the next day. We were in a Walgreens (most stores around here don’t sell alcohol, its mostly liquor stores that have it) and I spotted some non-alcoholic drinks. I saw that the lager was only 93 cents, so I figured, eh why not? Some near-beers actually are not half bad, especially the German ones. Not the case here. First off, I don’t like MADD. Yep, you heard me. I think it was an organization that was founded with a good purpose, but has since become a worthless lobbyist mass. Even the founder left MADD because she didn’t like the direction it was going, and that was 29 years ago, so just imagine what it has morphed into today. I actually didn’t notice the “MADD” part of the can, if I had I would not have bought it. But I didn’t, and so I tried it. Ladies and gentlemen this may well be the worst beer I have ever tried in my life. There is nothing redeeming about this beer, other than that it cost 93 cents. It tasted like liquid field corn. Again, it was not bad because it was a near-beer, many of those taste just fine for what they are. This “lager” was freaking horrendous. Sorry MADD, but if you don’t want people to drink beer (they don’t, they rage against beer but ignore hard liquor, sound logic there) you’ll need to do better than this crap. 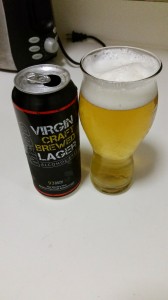