Its time again for another Beer Blurb. Though these are quickly becoming more about  beer and food than just beer, but the title shall remain.

This one is actually being written the day after, largely because I’m sick and haven’t felt like doing much.

Anyways, down near Central and Kendall squares there is a legendary place known as Toscanini’s. Its an ice cream shop, but its been called the best ice cream in the world by entities such as the New York Times, the Boston Globe, and the London Herald. I have no idea if its the best ice cream in the world, in fact its probably doubtful that it is (its all subjective anyways), but praise like that makes one curious doesn’t it?

So, we decided we wanted to try out their ice cream and we planned our dinner around our dessert. Kind of the opposite of what you normally do, but whatever. SB found a place pretty much immediately adjavcent to Toscanini’s called Asgard. It was an Irish pub. I’m not sure why an Irish pub has a Norse name, but we won’t split hairs. I was sick and didn’t really care, so we headed out into the unseasonably cold temperatures. Once we got there (it was far enough that we needed to take a bus) we found that the place was absolutely packed. There was some sort of 5K Race registration/packet pickup going on. There was also no host in sight. Right about the time I decided I wanted to leave, the hostess came over and took our name. It wasn’t that long of a wait from there and we ended up getting seated fairly quickly.

I was sick, but that didn’t stop me from getting a beer. Our selection: 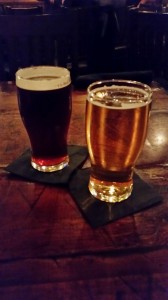 If you have a really good memory, you’ll notice that I’ve had the Cambridge Amber before. If you’ve followed the blog since its earlier inception, you’ll also know that I’ve had Carlsberg before. The Amber, is, as before, a nice Ambery beer with good malt tones. The Carlsberg was a Carlsberg, complete with its unique little twang of an aftertaste. If you’ve never had a Carlsberg, you really need to try it. Of course once you’ve had a beer straight from the brewery, its kind of ruined for you, even on tap. (If you couldn’t figure it out, the CBC is the dark beer in the photo).

We also had some really good food. SB had some macaroni and cheese (shells) with white cheese, Brussels sprouts, and corned beef. I had a corned beef sandwich, a salad with honey lime vinaigrette and onion soup (which had a piece of melted cheese over it). The food was really good. 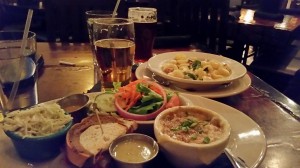 They had lots of ruinic stuff on the walls and windows as a design element. One of them said “Yay”. 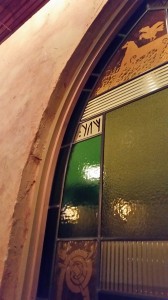 I have no idea what it really said, but I see Yay. Overall Asgard was good, it was a bit pricey (for us, not for the area), and the Irish theme seemed to be way under the Norse them, but a good experience nonetheless.

After that we headed across the street to Toscanini’s. I had read many times that the lines for this place can be HUGE. However, it was way cold for the time of year (think about 15 degrees below normal) so while there was a line, it was not out the door and down the block or anything crazy.  They have 32 flavors each day, which rotate, they also have coffees, cakes, and the like.

We both got two scoops, SB went with Nocciola (Hazelnut, basically) and Heath Bar. I went a little more crazy with Burnt Caramel and Gingersnap Molasses. Again, while I can’t say if its the best ice cream in the world, it was very, very good ice cream. I favored the Gingersnap Molasses over the Burnt Caramel. I was actually expecting it to go the other direction, but the Gingersnap Molasses really surprised me. SB liked the Nocciola more than the Heath Bar, primarily because it was more unique. If you really want an idea of the kinds of flavors they have, I suggest looking at their rotating menu (click the “Today’s Flavors” button up top). Their prices were not bad at all for the location and the amount of ice cream you got. 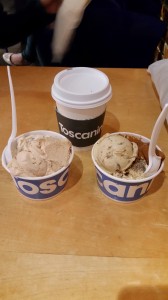 Finally, closing things out, today I got a six pack of beer while we were out running errands. It was at a new liquor store that I had never been to before. It was sadly just as expensive as my regular liquor store, but the selection was different. They were really bad about pricing things, in that most things had no price tag (which seems to be a woefully common issues out here at smaller marketplaces). However some of them were marked. One of which was a grapefruit wheat beer. Yeap, you read that right. I struggled with the cost for all of 10 seconds then decided I had to buy it. 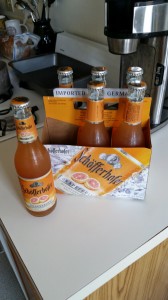 So I like grapefruits and I like wheat beers. I also like oranges in my wheat beer. So I didn’t figure grapefruit would be too much of a stretch.

I have to say, I was very, very impressed. Its undoubtedly one of the best fruit beers I’ve ever had. It reminded me of Leinenkugel’s Orange Shandy, except it was even better. The Germans are just good at mixing fruit and beer, that is really all there is too it. It was a nice balance between an unfiltered wheat ale and well.. grapefruit. I think that even if you didn’t like grapefruit, but like wheat ale that this is worth trying. Conversely if you don’t like wheat ale but like grapefruit, its worth trying. SB was very impressed as well. She seemed to really like it, though she is a fan of a good shandy-type beer. Definitely marking down the Schöfferhofer Grapefruit Weizen on the “Do Drink” list.