So, I only have one beer to talk about this time around, Narragansett. I’ve never had this beer before. I’ve heard of it, but never tried it. I actually didn’t even pick it out. I’m in the middle of law school orientation (as I write this, not necessarily when it gets posted) and I requested that SB get me some beer while she was out. Its not that orientation is overly stressful, but its not really fun either. Anyways, my only stipulation was that it was A: Cheap and B: Light enough for her to carry home alongside the soda. She was probably going to get me another Yuengling Light but they were out. So she went with Narragansett. 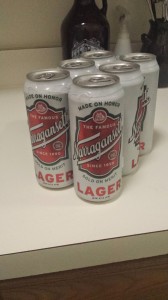 You’ll notice its in cans, see instruction A. My initial reaction to the beer was a bit lukewarm. It wasn’t bad, but boy it was not unique at all. I have to admit though, its grown on me as I start drinking the second one, but that is arguably true for most beers. To be fair though, I only poured the second one into a glass, the first was from the can, so that is a very probable issue. Anyways, Narragansett seems to be named after Narragansett, Rhode Island, which is itself named after the Narragansett Native Americans. They aren’t really forthcoming with this information for whatever reason. The brewery has a bit of a “fallen from grace” vibe, in that since its founding in 1890 it seen a rise to the top of the New England beers (a region of fierce competition) to a descent into a narrow market sector. Its slogan is “Made on Honor, Sold On Merit” not sure what the story is behind that, but they definitely didn’t take merit as payment.

Anyways, I had their Lager, the standard for the brewery. Its technically an American Adjunct Lager, which is a fancy way of saying its a light bodied beer, resembling piss, that came about after the American prohibition (which f*cked up our beer in a lot of ways, thanks conservatives). While I normally tend to be a bit more “nice” than Beer Advocate, this is one of the times where I don’t find myself agreeing with their relatively lofty (for a macro) ratings. Its not that Narragansett is bad for an American Adjunct, its just not special. I think if you put this and a PBR next to each other, you’d be hard pressed to tell a huge difference (its there, just not huge).

I’m not even sure how widely available Narragansett, but I’d probably have to recommend at least trying it for the price. This is especially true if you are a Red Sox fan, since this was apparently their official beer for 30 years. I looked but I couldn’t find their current official beer, though my guess is Sam Adams simply because that makes sense on a lot of levels.

Worth checking out, but not too memorable. Cool name though, even though they don’t seem to formally acknowledge its etymology.