This is the second “Beer Blurb” see the first post here if you want to know what that is, I’ll not be laying out reminders from this point on.

So I’m learning that beer is very expensive out here.. in some ways. Here is what is odd, beer on average, is indeed more expensive. However, 12 packs for non-domestic, non-macro brews actually seem to be cheaper. Case in point, in a recent stop at a local market I picked up the “Best of Belgium” pack which includes:

[Last Beer Blurb reminder, the names of beers are links which link to Beer Advocate]

This pack would have easily cost 17-18$ back home. However, it was 15$ here. Interestingly enough, had I got a six pack of say, Jeffe, it would have been way more expensive here than at home. In fact, a six back of “good” beer will run you 10-12$ here, while a 12 pack is only 15-16$. I don’t quite understand it, maybe they just really appreciate volume sales. Now, you also have to add in the bottle deposits, which still exist in Massachusetts. However, SB and I are sure to recycle all our bottles, so we get our full deposits back (at least when the Green Bean recycling machine is working that is).

So anyways, to the beer. All three are good, none are new to me. I personally like Belgian beer, I know many people do not. A lot of people think it tastes skunked, in similar fashion many people also think Heineken beer tasted skunked (with is Dutch, NOT Belgium, The More You Know!™). But its not, it has to do with the brewing methods for these particular kinds of beer. Futhermore, Jeffe and Hoegaarden are a far cry removed from Stella Artois, which is itself quite removed from Heineken. Jeffe Blonde (which is actually a Pale Ale) is quite strong, around 6.6% ABU, so naturally it packs the most punch out of the three, but also has a solid flavor. Hoegaarden is a Belgian White Ale in the Witbier style. Without getting all fancy-pants, its basically a wheat beer. Its known for being very cloudy by nature, but you shouldn’t let that detour you, its a good beer. Stella Artois is also a good beer, though less favored among beer-snobs than the other two. Stella is a pilsner beer, but its much different than American style pilsners. I personally like it, but I can see how it would be an acquired taste. Between the three Stella is the more “macro” but I like them all.

Overall this pack is a solid purchase, though I probably couldn’t recommend it if you don’t like Stella Artois, simply because its actually divided into 6 Stellas, and only 3 each of the other beers. However if you want a nice tour of macro levels beers in Belgium this is a solid box for sure. I can only share the box, since the bottles have been turned into nickels. 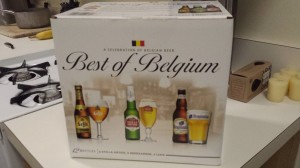