Which means I have no class!

Having this break has been nice, I actually have tomorrow off too. See, I’m sick yet again. I was sick for about a week, then ok for a week, then I got sick again. In the week between SB was sick. So there has just been a truckload of sick in these parts. Thankfully I’m on the upswing, the break helped in that regard. Not that the break actually means I have less work to do, oh no, law school doesn’t really have breaks (and I’m not just saying that – our two week long holiday break is rife with responsibilities).

Anyways, since I was sick, and it was my week to pick where we went this past Friday, I chose to just go to a nearby market. It was quick and easy and since I was sick, that is exactly what I wanted. Turns out it wasn’t any cheaper, little markets around here have awesome food with horrifying prices. But we got to sample some of their food that we normally don’t allow ourselves, so that was nice. More importantly, since it was a long weekend, I decided to opt for a 12 pack instead of a 6 pack of beer.

I was really having a hard time deciding, so when a sampler pack from the Brooklyn Brewery caught my eye and as soon as I realized it was one of the “5 variety” packs (4, 2, 2, 2, 2) I went for it. Going on down to Brooklyn. 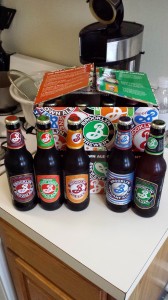 (All of these beers are from the Brooklyn Brewery)

Its weird to say going on down to Brooklyn, but that is technically correct. Odd.

Anyways, this is one of those packs that contains 5 different types of beer, which, aside from the rare 6 variety twelve pack, these are the best kinds of 12 packs in existence. I’ve had the Brooklyn Lager before, it is their standard flagship, but I had not had any of the other beers.

Their Brooklyn Brown Ale combines some older English styles and adds an American accent of a firm hop character with some roasty undertones. I’m honestly not a huge brown ale fan these days for whatever reason, but this was a solid brown.

The East India Pale ale uses barley and hops from Britain, which a traditional IPA would. I’m honestly not sure on the difference between an EIPA and an IPA is, though EIPA’s tend to be a little higher ABV (this one is 6.9%). I used to be horrified of IPAs, in fact the earliest micro-brew I remember savagely hating was Dragonfly (which I still think is not a good beer). However, over time IPAs have grown on me, I’d even say I like some of them. I guess I’ve grown to appreciate high IBU’s. Anyways, this EIPA was good for what it was, but I don’t know enough about EIPAs to really compare it.

The Brooklyn Pilsner was the one I was most looking forward to. Its a full-malt style pilsner (i.e. from Germany) but there is also some hoppiness going on here. It was a good pilsner, oddly a little more murky than I was expecting though.

The Brooklyn Pennant Ale ’55 was the oddity, at least when I was looking at the box. I had no idea what a Pennant Ale was (I have very little knowledge of baseball lingo), or ’55 , but I did notice that the bottle looked like a homage to the Brooklyn Dodgers. I was correct on that last part. The ale itself is an English-style pale ale, its fairly brisk for an English ale and there are some very, very subtle fruity tones mixed in with the hop aroma. I have to say, this is the best beer in the box. Even if you have been around a long time and hated the Brooklyn Dodgers (who won the world series in 1955, thus the name of this ale), or I guess if you hate their modern counterpart, this beer is still worth trying.

Lastly, the Brooklyn Lager was, well, a lager. It was apparently the first recipe every brewed by this brewery, and that sort of shows. Its a typical dry-hop amber lager, but that isn’t necessarily a bad thing. It has everything you would expect from an American lager, but compared to some of the more exotic offerings in this box its just kind “there.” Don’t get me wrong though, I recommend it.

So overall, this is probably the best sampler pack I’ve had since moving here. Sure the Belgians put up a good show, but this sampler pack is just awesome. If you see it, you must buy it. If you don’t like it, send it to me. Or just send it to me anyways, that is ok too.