So I find my whopping 1 day break between Winter Term (J-Term) and Spring Semester has passed me by. Imagine that. On Monday I start the next semester, complete with a full course load. I am not thrilled, but I’ll get to that in a moment.

First, let us revisit the end of the Problem Solving Workshop. On the whole, the class probably came out better than I was expecting. Yes, I realize I’ve complained about it a lot, and make no mistake I am very glad its over, but it could have been much worse. I got a decent team and the way we divided up work was pretty good. Overall, I still think the class is largely a massive waste of time, aside from the cliché “It teaches you how to work in groups!” motif. But its over. The “Final” for the course involved going downtown to present about a week’s worth of legal research to an attorney. Some groups stayed at the law school, others went to people’s houses, some went to actual firms. I was in the last category and my firm was Ropes & Gray, a Vault 25 firm. 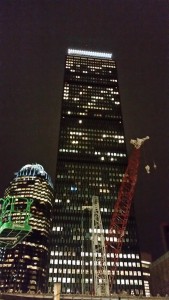 We met with one of the partners. An actual partner. Many groups just met with associates, we got a partner. We were more than a  bit nervous about this. But, it turns out that we were really lucky. Our partner was awesome. He is younger (for a partner) and was amazingly friendly. In addition to being a biglaw partner he is a classically trained singer, an amateur comedian, and he has his own one-man cabaret show (no seriously). Where some groups got pretty heavily grilled, our entire meeting was very collegial.

When we were waiting for him to come in everyone was nervous, as mentioned, but once he got into the room we knew things were going to be just fine. He started by passing around the brownies and cookies and fruit. He told us that since everything gets billed to the client, “You either eat it, stick it in your desk, give it to your secretary, or take it home for your wife or kids. If none of them want it, you feed it to your dog. I guess you aren’t supposed to feed dogs chocolate, but I’ve been feeding my dog chocolate for years and he is fine. … He is obese though.”

I’ve now told that story multiple times, and I still laugh. It is made funnier when you realize that this is a white collar biglaw partner man who bills out at 1100$ an hour.

So, my first real interaction with a partner was very good. As mentioned, other groups did not fare so well. While we did have another class the next morning, that evening outing was realistically the end of PSW since there were no actual assignments for the last day. I was happy to see PSW go, until I realized that it meant that I was about to start yet another 1L semester. Unfortunately this semester has the makings to be worse than the first one. One of my professors is literally in the bottom three reviewed professors at the law school. I mean their feedback is just atrocious. Another professor is known for having HORRIBLE cold calls and for basically being an unnecessarily cruel asshat. Then, as if Legal Research and Writing needed to try to be any worse, we now spend the entire semester working in pairs on a brief and oral argument. I mean, come on, its like PSW bred with LRW and made hellspawn. My other two courses are a bit up in the air right now, so they could go either way, but overall, I am not enthusiastic about Spring semester. At least I have a summer job (assuming my background check pans out – which it should). I think I am actually still burnt on law school and this not really having a break thing is an adjustment. I’m still used to undergrad where you have a long break with nothing filling the gap. Law school has a short break and the work doesn’t really stop, I had so many emails and “Do this now” things over break that my mind never really got to shut off law school (except for West Baden weekend, yay Meem!). But, this is big people world and long breaks like that don’t exist for most of us, so tough-tooties for me I suppose. I’m just hoping law school will appeal to me more in the second year (which I’ve been told it should).

Aside from lawl skewl, I did have my acupuncture appointment. It went well, and the acupuncturist was very nice and willing to listen to my very lengthy medical story. I think I ended up with about 30 needles in me. Honestly its not really as bad as it might sound. I was telling SB, of the 30 needles, I’d say only 5 “hurt” and of those five only one (in my left hand) hurt bad enough that I winced. Oddly the ones in the places you’d think would be really bad (like the back of your knee) weren’t bad at all. Acupuncture made me feel weird. It was like.. an internal pressure of sorts, but it wasn’t a bad thing. Maybe it was a placebo, but my body felt very strange while I was lying there (After the needles were all in I laid under a heat lamp for about 20 minutes – nearly fell asleep too). My shins felt like they had a load of pressure in them, but my numb spot on my back felt better almost the instant he put the needle in there. After I left I noticed something very, VERY weird. My legs didn’t hurt. It was crazy, I had forgotten what it was like to have legs that don’t hurt, so much so that my legs not hurting felt messed up. Odd isn’t it? The pain free period lasted about 30 minutes, which was similar to when I did physical therapy a few years ago.

Sadly I doubt I’ll be continuing acupuncture. He recommended 4-6 sessions to get me “stable” and then from there its kind of like chiropractic treatment where you need to go every little bit to keep it up. The thing is, its 65$ a session, which we can’t afford. On top of that, his schedule is crazily restrictive. He only is there on M, W, F, and Wednesday is a half day. His schedule is very much catered towards morning appointments, buuuuut mornings are full of classes for me. I designed my schedule to have big openings in the afternoons on W, Th, F.. of which only Friday works for the acupuncturist.. but those appointments were all full. So I dunno, between scheduling difficulty and the cost I’m not sure if its feasible to continue.

I have yet to have my physical therapy appointment.

So, that is really all I have for now. I’m trying to enjoy my last little bit of freedom. I already have a ton of reading I need to do for Monday, but I’m procrastinating as long as possible on that to try to eek out just a bit more of my miniscule break. We are having some snowy/icy/nasty weather here, which makes doing nothing a bit more easy. 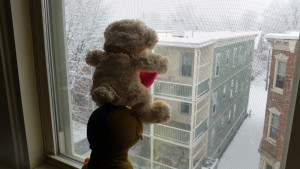 So, with that said, I’m going to go back to doing just exactly that, nothing. 🙂 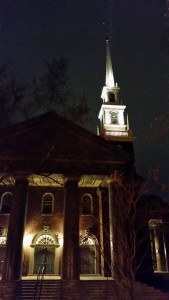 The Memorial Church in Harvard Yard, as seen during a recent evening walk home.