So my summer has finally come to an end.

While I know that I’ve done all sorts of crazy stuff this summer, from temporarily moving to Denver, and working for the Department of Justice, to taking business school classes, to hiking in the Rocky Mountains, taking a train up Pike’s Peak, visiting Lexington and Concord, and so on and so forth, it actually doesn’t feel like I’ve had a whole lot of summer. I suppose that is the downside to being so busy, time tends to fly.

In light of this and some other factors, I’ve been a bit down lately. I’ve also literally been down, but more on that in second. By “down,” I also mean unenthusiastic about law school. Things I was previously looking forward to I now dread, that sort of thing. I’ve really been questioning my law school path lately, so it has trickled into pretty much everything else going on in my life, even those things completely unrelated to law school itself. However, I’m being proactive about this and trying to see what can be done and then I will evaluate it from there.

As for literally being down, I ate bricks today (9/7). I was out for my run when my foot caught one of the many uneven bricks that dot the Boston landscape, and I just plowed straight into said brick sidewalk. To make matters worse, I was running downhill. So not only did I fall into uneven bricks, I slid on them. I quickly got back up on my feet and hobbled back home (fortunately I was only about 5 blocks away – which seems a lot longer when you are bleeding).

Luckily I had no major damage. I sliced my left hand pretty good, and I had cuts and scraps in 7 or 8 other places. I also had more than a couple bruises and some spots of road-rash. My left hand, right knee, and elbow took the blunt of the impact. Of everything, I’m most worried about my knee as it is still pretty painful and a little swollen. My right wrist is still just a little bit swollen, but it’s gone down over the course of the day. While I’m lucky I didn’t get hurt-hurt, it’s still the worst fall I’ve had while running since at least childhood. I can now say from experience that bricks do not do a very good job of breaking your fall, especially when those bricks are uneven.

But, not everything has been ho-hum leading up to the start of the semester (which is tomorrow, 9/8). SB and I have been having fun where possible, even if its something as small as getting Biscuit and Gravy flavored potato chips. 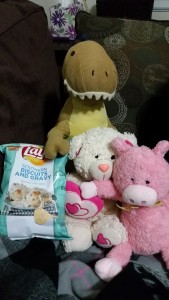 Yes they are a thing and yes they actually taste like biscuits and gravy.

We’ve also had more than a couple beers around the ole’ apartment, including a tasty and bold (if not quite strong – 7.1% ABV! – and it isn’t even a double) IPA from none other than Great Divide. 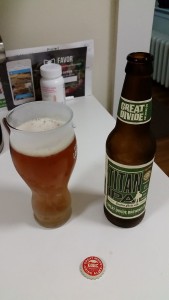 I thought it was funny that I’d never had Great Divide before I went to Denver and then it “followed” me back to Boston. And as if one Colorado beer wasn’t enough, we also tried a single from the Left Hand Brewing Company (located in Longmont, CO). 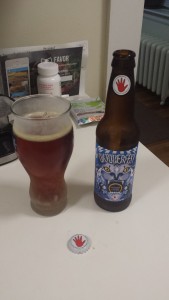 It had a mild, yet enjoyable, Oktoberfest flavor, which was surprising given the decent ABV of 6.6%. I was a fan.

However, we weren’t content to only have a Colorado Oktoberfest, so we of course had to get a hometown contender. While Samuel Adams might be the “King of the Hill” for Oktoberfest in Boston, we decided to wait a bit longer for Sam and give Harpoon’s Octoberfest a try. 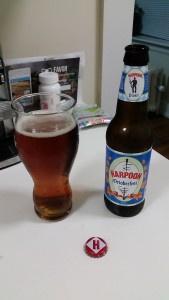 Being Harpoon it of course didn’t disappoint. However, I did think it was interesting that even though the Harpoon’s ABV was quite a bit lower than the Left Hand (5.3% vs 6.6%), it had a much more stout Oktoberfest flavor than did the Left Hand. Both were good and I’d recommend each of them, albeit for different reasons.

In addition to drinking beers at home, we also crossed some more things off our Boston Bucket List, such has having a picnic at Boston Common! 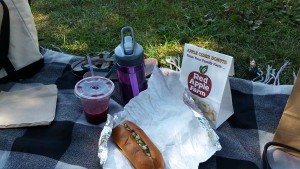 Plus, to make it even better, all those items came from local vendors, courtesy of the Boston Public Market! 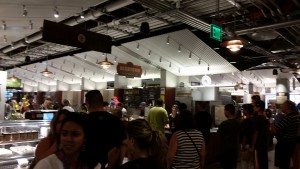 After eating our yummy picnic, we headed over to Cheers, which we had been meaning to do for quite some time. 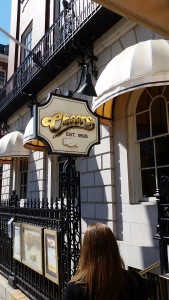 Of course we had to have some beers while at Cheers (yay rhymes!), and we went with a Samuel Adams Summer Ale and a Samuel Adams Brick Red, both of which are tried-and-true favorites of ours. 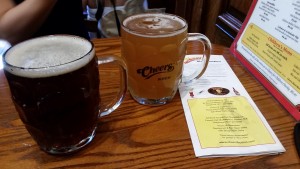 I’ll leave it up to you to guess which one is the Brick Red.

We were pretty fortunate to even get a high-top table, even at 2:30pm Cheers was PACKED, and I do mean PACKED, and we weren’t even eating. But I would guess that Cheers manages to stay pretty busy and based on their prices they need only sell one french-fry to make a profit on any given day. But it’s kind of against natural law to not get a beer at Cheers if you live in Boston.

On a rare completely-not-related-to-alcohol note, we also revisited Pleasure Bay and Castle Island. This time it was a bit less about history and a whole lot more about being lazy in the sun, and fortunately the weather was very cooperative (plus we didn’t even have an public transit issues!). 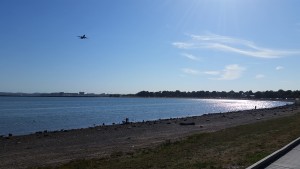 While relaxing on the beach we met Walter, a seagull, who in addition to making meth also enjoys bread. 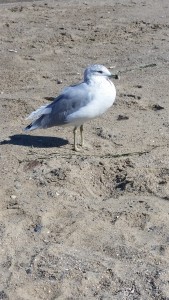 In fact one could say he probably enjoys bread too much. Once we stopped feeding him he just sat there (until chased off by a small child) telling us his sorrowful stories of woe and misfortune. It was actually pretty funny, he was clearly communicating with us that he wanted more bread.

After a bit of sunbathing we walked the 1.84 mile loop around the bay. 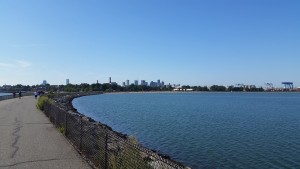 Which brought us out to Castle Island and Sullivan’s, where we had a light lunch. On the way we also passed Fort Valentino, a gift of King Tristen. 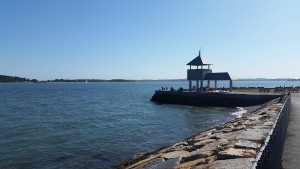 Later that night, we were sitting in the living room relaxing when we started hearing loud bangs outside, after convincing Tristen that war had not started (much to his dismay), we realized that it was the Labor Day fireworks out over Boston Harbor. Sadly we couldn’t see them from where we are, but we could definitely hear them. However, a local TV station remedied the visual problem. 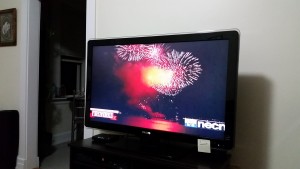 Watching fireworks live on TV while hearing them outside was an interesting and cool experience. There was about a 2-3 second delay between the explosions on TV and us hearing the sounds. Once you factor in the distance traveled by the sound wave, it’s crazily impressive that a camera can send a signal to a satellite, then a satellite to a station, and that station to a broadcast tower, and that tower to the cable lines, and the lines to our TV in a matter of seconds. It’s easy to forget how wild technology is.

Today (Labor Day) was set aside as a productivity day. I have a job interview tomorrow (it is actually supposed to end at the same time that this will get posted) that I had to prepare for (in addition to homework for my first classes, amounting to about 170 pages of reading) so it was sadly time to buckle down and work. Of course becoming one with the brick sidewalk put my productivity on hold for a bit, but all things considered, I ended up getting just about everything I needed to done. We even had time to go up to The Biscuit (Ritch) to have some coffee, sandwiches, and a plumb-ginger scone – that we shared with some of the little birdie buddies (the only downside was that it was just so hot out)! 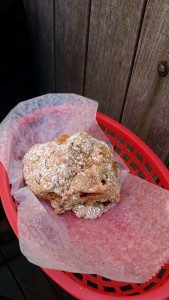 It was really good, not too sweet – just right

So, that was really all I had to share. I just wanted to touch base now that my summer is officially in the rear view mirror (at least as of this getting posted). Unfortunately I can’t report that I’m very excited about that prospect, but we’ll see have things start to unfold once my schedule normalizes, since between my clinic and new classes and a new position at my journal, things are going to be very chaotic for a bit. My hope is that this down period is just a phase, but we’ll see what happens – the first thing on the list is getting through my interview tomorrow, and I’m less than thrilled about having to walk 1.5 miles in a suit when it’s supposed to be 92 degrees, but at least I have a job interview I suppose – I just wish it hadn’t fallen on the first day of classes and that I hadn’t battered myself up this morning (will make getting the suit on a fun time).