So the group-project hell that is PSW marches on. Fortunately next week is my last week and I technically only have three days since we have no class on Friday (since that is exam day and we have no exam) and also Monday is MLK day. That said, those three days are prone to be the worst of the bunch, especially since I have to go downtown to a biglaw office and present a formal project to a biglaw partner on Wednesday night. Harvard of course requires us to do this, but does not assist with getting us there (almost as if they took a page from the DIS playbook). Anyways, this wouldn’t be too bad, other than the fact that I recently found out my suits no longer fit me correctly. See, my natural weight is somewhere in the 160-165 range. I tend to stay right in there when I’m having no weight issues. I’ve returned to about the 167 range, but when I got my suits I was probably in the 175-180 range. Its not a huge change, but its enough of a change that my pants now look like clown britches around my ass. It doesn’t help matters that my back curves in and my butt sticks out, which has made finding pants that fit right difficult for my entire life. Essentially my butt can’t fit in the pants that are the right size for my legs, so my pants in the thigh area tend to be really baggy while my butt is tight. It looks stupid, just trust me on that. Since this is a professional presentation, I have to wear my suit. The good news is that one of my suits isn’t as clownish as the other one. The bad news is that I have no overcoat, so if its raining and/or very cold (I can assure you it will be at least one of the two) I’ll be in a bad spot.

Later this week I’m going to take my suits to a tailor so I can spend more than I paid for the suits to get them altered, but I have to have suits, its just really not an option. Of course this does me no good in the present and its not like I have much money to spend. Especially since I’m going to be picking up 1-2 sessions of acupuncture, which even with my student insurance discount is still 65$ a session. Oh yeah, we also need an ironing board, a travel clothes steamer, and I still have a broken regular jacket (and no overcoat – then the alterations on the suits). We’re going to go start looking tomorrow at Target, but I’m honestly not sure we can afford all of that. sigh

But, mentioning the acupuncture, I was recently told that there is probably nothing that can be done about my legs as far as diagnosing or “fixing” the problem. We’ve pretty much exhausted every possible test there is, and, honestly, I’m a bit tired of getting tested continuously. You can only be stabbed, shocked, and shoved into a tube so many times (with absolutely no decrease in pain) before you just have to say “Feck It.” I’m not going so far as to say, “Ok, I’m out.” But I think I am done seeking endless batteries of tests, at least for now.  So, rather than “fixing” something that might not even be capable of being fixed (or detected), we’ve turned to trying to manage and to learn to live with the condition. As such, I’m going back to physical therapy (which is thankfully covered entirely by my insurance), not to try to fix the problem, but to see if there is anything I can do to make it more manageable. Likewise, I’m going to finally try out acupuncture. I’ve looked into it many times, but its quite expensive and its not been covered by any insurance I’ve had so far. Out here I can get it for 65$ a session, which is still far too expensive for me to use as a regular treatment, but I’m going to try it at least 1-2 times. There is also an 8 week long course on mindfulness and meditation offered by my Doctor that I am strongly considering taking. Its 150$ for graduate students and these courses generally run 750-900$ if you take them elsewhere in Boston. I’m currently in a student-ran, guided meditation group at the law school but I don’t do it regularly enough to reap the benefits. So that is where I am medically, its not great, but at least I’m not getting shocked anymore. I’ll try to update as things progress, if I can afford them that is.

Anyways, the title of this post “B. Good to Yourself” is not about me whining about health stuff or PSW or my inability to afford the clothes that my school requires. Its actually about a place SB and I went to on Friday night called, well, B. Good. 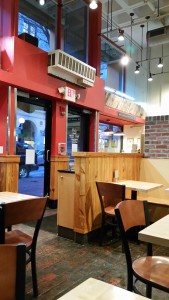 By appearance its pretty much like any of the other small food-stations that dot the area. But B. Good operates under a slightly different model, mainly they focus on real, local food. You know, the kind of stuff you grow in a garden but that most restaurants charge 12 million dollars for because it didn’t come in a 5-gallon bucket. SB and I like supporting local farmers, but we generally cannot afford it. Other than some local stuff from Whole Foods, one of the various farmer’s markets, and the occasional jaunt to Savenor’s we are largely kept out by the price barrier. At B. Good however, both SB and I were able to eat for less than 20$ which is generally our goal, but lawds is that a hard goal out here in East-Coast-Land. But B. Good was affordable. When you enter they even show you some of the farmers who provide them with various varieties of noms. 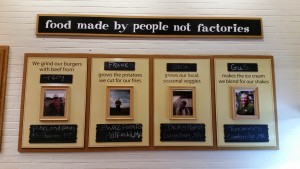 There’s even a map that shows where in New England the various bits and pieces come from. 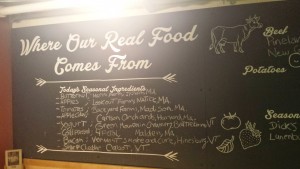 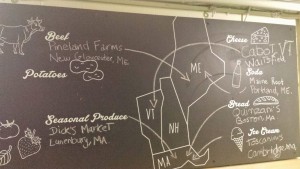 The food was very good, even the soda is local, coming from someplace in Maine. SB went with a turkey burger (ADOPTED LUKE — mushrooms, caramelized onions, smoked gouda, bbq sauce) and I went with a seasonal chicken sandwich (JOANIE — avocado, sriracha, homemade spicy slaw). We then shared a mixed Maine-Coke/Blueberry drink. It was all noms. 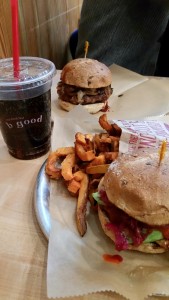 This actually wasn’t my first time having B. Good. Back during something called “Wellness Week” at the law school, B. Good had a truck and were giving away free itty-bitty smoothies. They also had a prize wheel you could spin, I won a… high five.. yeap.

Of course we actually almost didn’t even make it to B. Good, because it was SO FREAKING COLD we both considered turning around and eating someplace closer to home. Of course the upside to such cold is that Harvard took it upon themselves to install an ice-skating rink! 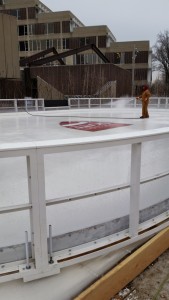 Ignore that ungodly ugly building the background, its the Science Center and it is literally the most hideous building on campus. It was built in 1973 largely thanks to a donation from one of the co-founders of Polaroid, and the rumor is that it was designed to look like one of the early Polaroid “Land” cameras, but I have no idea if that is true. Either way, its freaking ugly. But the ice skating rink is fun! Not that I can skate, or have skates, but still, its a nice touch.

Anywho, that’s about all I have for now. Just wanted to share some PSW, suit, and health-related misery. Remember, as this is my blog I have a free ride for complaining, especially when it comes to not being able to afford things. But at least I have still beer, but its only Miller Lite this week (because cheap). What has become of me. At least there has been plenty football on to watch! (I also made some very tasty turkey burgers to go with the show). 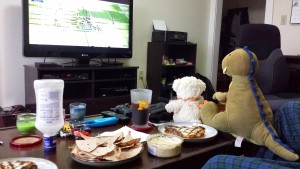 [Also, PSA, university bookstores suck. Like when they tell you that you need a book and you actually don’t so you lose money returning the book you don’t need. And also when they lie about their return policies. This is pretty much every university bookstore everywhere. Use Amazon, seriously.]