A Note As I Begin Regular Posts – I Make A LOT of typos, I correct them for School/Work, etc. but I won’t here be correcting them much here. This is my blog, deal with it 🙂

The trip to Copenhagen was relatively uneventful, in that things could have been much worse (lost luggage anyone?). On the same token, remaining true to my ever pessimistic self, things could have went much better. The main bit of frustration came from the fact that it was 6500 degrees on the plane, yes, 6500. I was soaked with sweat, and even the little packet of cheese they gave us melted while setting on my lap. It was an overnight flight, and I didn’t manage to sleep but more than 10 minutes, not because any person was being loud, in fact even the babies were seepin’, but because of the heat. Luckily I survived, and came out ok, though I was literally dehydrated by the time I got off of the plane.

DIS’ initiation thing was pretty intensive, and really most of the students were ready for it to be over, especially since many of us had lost an entire night’s sleep AND were now dealing with jet-lag (In my case, for the first time ever). I’m not going to type out a whole big bunch of information about the first day, because I don’t feel like I’ll ever forget that craziness. A nice highlight was getting to watch a classically trained string quarter courtesy of DIS, they were as good as the picture might have you imagine. After we had a little into and a concert.. we proceeded to get lost.. quite badly, but luckily a friendly Dane saved the day and prevented us from wondering in the complete wrong direction for hours. 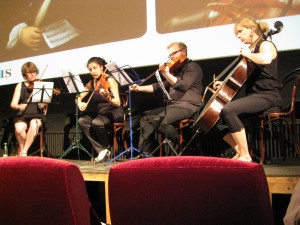 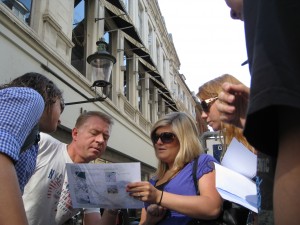