I didn’t do anything really fun or exciting today, so I don’t really have any pictures to share, but I still have a few things to say.

First off, if you count the total number of days that I am in Denmark with DIS, I am now officially on the downward slope. I have been in Denmark 26 days, and I have 20 days left. Looking at those numbers I have actually been on the downward slope for a few days now, but starting the second session (my second class) makes it feel more like the halfway point than just does counting days. So, I’ve been in Denmark for almost a month at this point, and does it feel like it? Heck no. Time has been soaring by here, despite things not always being pleasant, or hardly ever being easy, overall things have been great. Sure, I don’t really get along well with a fair number of my fellow DIS students, but I didn’t come to Denmark to see them anyways. So far Copenhagen and Denmark themselves have been completely awesome, if a little too cloudy. Its also been hard getting used to the high being 60 degrees in mid June, but truth be told its something I could probably get used to. Fun Fact: I haven’t missed humidity for a nano-second.

So on to my second class! Whereas my first class dealt with human trafficking, this new class is about positive psychology, so its literally about as much of a 180 as humanly possible. The bad news is that this class counts for nothing because DIS and Purdue were stupid in tandem with one another. The good news is that I get to go to Scotland! (T-Minus 6 days!). Plus, I figure if I have to take a class I have no real interest in, I might as well take a class that’s about being happy, I mean that seems fairly healthy. The first class was odd.. in that we did this weird introduction thing. Basically, we sit in a large “U” shape, with the instructor at the forefront of the U. As a way of getting to know each other, we had to list our names and say hello to the other students. The way this worked is, one person on one end of the U, said their name, then the person next to him said “Hello *name*.. I’m *name*”, pretty easy eh? Well, the hard part was that this daisy-chained around the entire classroom, so that the person on the opposite side of the U had to list EVERY SINGLE PERSONS NAME then say “Hello I’m *name*”. I was just past the half way point, and I messed up a few names, but not caring too much. It took a long time, and worked decently, though it was a little juvenile. The fun part was when the first person, who only had to say their name, was suddenly called to task at the very end and had to list everyone’s name, he must have been expecting it because he did better than anyone. After that we “interviewed” each other, but I was sitting next to a guy from Switzerland I already knew, so that was a non-issue. Its going to be a class unlike any other I’ve had before, I just hope the fact that it counts as nothing doesn’t get in the way of the difficulty too much.

Right as class was about to end, I heard something I had not heard one single time here, thunder. I think everyone was surprised as few people jumped. According to my visiting family Dad, Arne, only a handful of people die in Denmark each year due to storms, and when someone days you’d think Hell had risen because they make such a big deal about it. Luckily the rain was spotty enough that I was able to make it most of the way home, or to the store rather, as I needed to buy more mouthwash as I am quickly becoming sick. One of the people I am around a lot had a cold, and as I guessed it was only a matter of time before I caught it. I’m only in the beginning stages though, so I’m hoping with lots of rest and rinsing I can kill it before it gets too bad. Because yeah, they don’t have cold medicine here really, and that’s not an exaggeration. Its a much less medicine driven culture than America, whereas we have pills for everything, they only give you pills when absolutely necessary (for instance, good luck finding pain killers, they don’t really exist). So, in order to prevent myself having to go to the apothecary (think CVS), and try to communicate with them (you have no access to medicine yourself, you must ask the pharmacists to get it for you), I’m trying to be as healthy as possible.

And part of being healthy is of course drinking beer, which I’ve devoted myself to trying 1 beer per day, always different than the previous days. Luckily you can find singles MUCH easier here than in America, and me being the penny-pincher I am, can always find the cheapest beer out of 50 kinds. The beer I will be having this evening is Kaiserdom, which is imported from Germany.

The Tidbit of the Day: Restrooms and Drinking Fountains 101

Let me get this out of the way first, drinking fountains, DO NOT EXIST, here. So APPRECIATE THEM, because you never realize how nice they are, even when nasty looking, until they are completely GONE. Its an interesting thing really, the tap water here is amazing, like way better than most bottled water back home. In fact, the tap water in Norway was a kind of bottled water sold in America, I got a good laugh out of that. But in spite of their amazing water, everyone drinks bottled water. And I mean everyone, as you get charged for tap water at most places here, so you might as well get bottled water and be able to take it with you. I still use my tap water as much as possible, since I purchased two bottles of water early on and now reuse them, though I should probably throw them out now that I am sick, come to think of it.

But restrooms, public restrooms exist here, yes, but they are few and far between and you have to pay for them. Yes, pay restrooms. And don’t plan on slipping into the McDonald’s to try to subvert the system, they have no public restroom, very few places do. So, you either a.) Pay for a toilet (costs around 25 cents), b.) Go to someplace with toilets, and so help you God if you try to use the toilet without actually buying something, or c.) Wait until you get home. There is also the 4th option of pissing in a corner, which the drunk people do quite nicely, but its not something I would recommend. Thankfully, anytime I am in the city center, I am never more than a 20 minute walk from DIS, so I just walk there and use their bathrooms. And if I am further than that, I am generally out someplace spending money (i.e. Carlsberg) where I can use their restroom. The toilets here have the button on top, which seems to be a European thing. But more specific to Denmark, the toilets have two buttons. One for a “Big” flush, and one for a “Little” flush, I don’t think I really need to explain there difference. But in case you were curious, here is a picture: 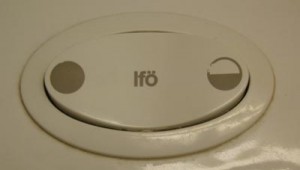 Moral of the story, appreciate your abundant free water and toilets, even if they aren’t always as clean as you might like. Here they are MUCH cleaner, but they are few, and they are not free.