So who writes all this stuff?
[Last Updated October, 2022]

Well, my moniker is Taco. The back-story behind that nickname is not nearly as interesting as you might imagine.

I have several children. One is a dinosaur (T-Rex, specifically) who is about 65.5 million years old. I also have a younger T-Rex, who is only about 65 million years old. I also have a Polar Bear as my “middle” child. My second youngest is a Pig. I also have adopted another T-Rex, Pigsten, who is still a hatchling and whose best friends are two other dinosaurs named Broli and T-Chonk. One of the Boys’ friends, a rabbit named Flopsy, has also come to live with me. The Boys’ Uncle is a Brown Bear who lives with my Meem. They also have other friends who live with Meem, including another dinosaur – Sinclair. I currently have zero desire to have any human children. I also care for a very ornery cactus – Little Friend 2.0 – and he pretty much runs the the place on his own. Sound implausible? Its not, everything in this paragraph is true.

I grew up in the Midwest (Midbest) and am an East Coast law school graduate who promptly reentered law school in another country mostly because I wanted to live abroad and that was the path of least resistance insofar as immigration was concerned. I’ve since lived in the Southwest and now on the West Coast. While I passed the bar exam on my first attempt, finished up my second round of law school, and was a practicing lawyer for 4 years, I didn’t see myself doing that for life or really even for an extended period – mostly because I didn’t really know what I wanted to be when I grew up. I’m still working on figuring that out, though I am now working in a brand new field so we’ll see how that plays out. I’m eccentric and according to some tests am “Highly Gifted” intellectually – though reading any amount of this blog will assuredly convince you otherwise. I have some form of damage in my legs and left foot that means I’m in chronic pain. So that’s made my life a lot more difficult than I would prefer, but after 11 years I’ve started to learn to live with it and had even managed to start going on short runs again – at least until the foot got worse. Hey, I’m a work in progress.

In my free time I mostly play video games, but don’t assume that makes me a basement dweller (though I would have loved to have a basement room when I was younger) – I enjoy getting into the great outdoors and am no stranger to long hikes, even with my leg issues. I also love nearly all things history and in an alternate life may well have ended up as a history professor. I also like speaking to animals, really more so than I do people. I thoroughly enjoy beer (and now whisky) and have brewed my own batches on several occasions. My first taste of beer was before I was even in kindergarten. I became masterfully adept at stealing drinks from my Dad’s Budweiser cans. I’ve since moved on to other beers and scotch, but one must always remember one’s roots. These days my ability to get good beer or scotch is a bit restricted due to finances, but that doesn’t mean I don’t try! 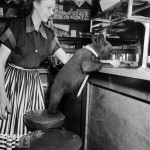