This post is all about beer. Rather than hide this within a larger post about “Stuff and Things” I decided that it was worthy of its own post. I alluded to it previously, and so here it is.

This past week I did a blind taste test of Guinness Draught and Guinness Extra Stout. 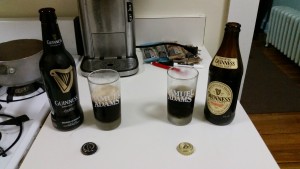 Photo courtesy of of SB, who is sensitive to not being credited, even when she doesn’t take the photo right [The “Samuel Adams” words were not supposed to obscure the beer, but SB did it because it was “funny.” 😛 ]

Now, I’m not a huge Guinness drinker. I have a friend who (literally) chugs the stuff, but I think he half does it in an attempt to bolster his supposedly Irish image. That said, I don’t dislike Guinness. The most common critique is that it tastes like coffee and has a weird texture. I’d say both are true(ish), but since neither bothers me, I have little reason to dislike Guinness. Of course, because I don’t drink it often, its not a beer I’m overly familiar with, so I normally can’t comment too deeply on it. I realized how much I didn’t know about Guinness a good while ago when FIL asked me about the differences between Guinness Draught and the Extra Stout. Not only could I not tell him, I wasn’t even sure which one it was I had had. Yes, it was dark times for Taco as a beer-person.

So, in this post I’ll share a little bit about Guinness, explain the difference between the two varieties, and then say which of the two I preferred.

Before we get started, here are the two basic kinds of Guinness.

There are a few other varieties of Guinness, but these two make up the core offering and are the ones I tried out (refer to image above if you forget what they look like).

Guinness is an oldish beer, not not super old (at least compared to some of the German beers, such as Weihenstephan – started in 725). It was created by Arthur Guinness in Dublin sometime around 1759. Guinness is made from water, barley, roast malt extract, hops, and brewer’s yeast. A portion of the barley is roasted to give Guinness its dark color and characteristic taste. It is pasteurised and filtered. Despite its reputation as a “meal in a glass”, Guinness only contains 198 calories per pint which is fewer than skimmed milk, orange juice, and most other non-light beers.

So what is the difference between the Draught and the Extra Stout? Well, the biggest difference is of course the taste, but the ABV is also quite different. Draught is 4.2% ABV, while the Extra Stout is 6% ABV. Further, the Draught is the smooth, creamy, coffee-like Guinness you are probably imagining, while the Extra Stout has more bite, is thinner, and has less of that distinctive Guinness flavor. Simply put, Draught is “Guinness”, Extra Stout is “thinner Guinness with more alcohol.” People tend to be heatedly divided over which they prefer, though most everyone can agree that either is better than Coors Light.

I think it ultimately comes down to what you are in the mood for. If you want a Guinness then you should drink a Draught, if you are looking for something Guinnessy, but with a bit more kick, you drink the Extra Stout. Flavor for flavor, I think the Draught is more of a distinctive offering.

So does that mean I picked the Draught in the blind test taste?

Actually no, I picked the Extra Stout.

For starters, they are distinct enough in both appearance and taste that I was able to guess which was which. In retrospect I probably should have closed my eyes when SB brought them out to me. However, its not like I was overly trying to be scientific. So, why did I pick the Extra Stout? Well, I think because its more akin to the type of beers that I usually drink. Its like a “light” stout, with a splash of Guinness. I also prefer the “bite” over the Draught’s silky-smooth texture.

Its also worth pointing out that this taste-test was done in bottles, poured into a glass. NOT on draft, and NOT in cans. Those parameters might have changed the outcome.

THE WINNER (BY A NOT-SO-CLEAR-MARGIN):