If I were to succinctly sum up what February was like in Iceland I’d have to go with: terrible weather. Yes, February was probably one of the most dreary months weather-wise that I can recall. If it wasn’t snowing it was raining, and if it somehow wasn’t precipitating then it was most assuredly still cloudy and windy. Oh the wind. But hey, at least we’re gaining sunlight back pretty quickly!

Of course dreary weather and Iceland go hand in hand and the wind is almost always a constant anyway. So what made February stand out in a bad way? Well, it was probably the fact that it was just so systemically bad. There were only a few brief breaks, but otherwise it was snow, snow, and more snow. Here’s a look out of our window, for reference:

Yep, white-out conditions. However, in retrospect even that wasn’t bad because at least you could (sort of) see through the window, on other days the windows just looked liked this: 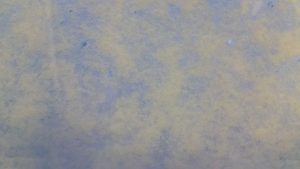 Yessir, nothing like ice-covered windows to start your day! Those are the days where you just want to crawl right back in bed, but sadly the ability to do just that seems so rare anymore. Instead you need to get up for one reason or another and head out into the frigid world. For awhile even our welcome mat was entirely froze solid. 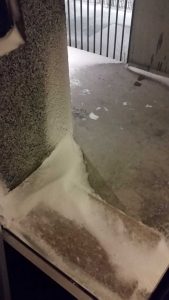 Though, as I mentioned last time, our walkways get pretty hammered with snow and ice so I guess a frozen welcome mat isn’t too surprising. 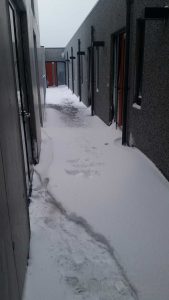 Beyond the threshold isn’t a whole lot better, just more snow and grey skies – and also the wind. 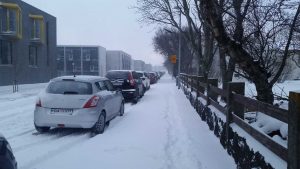 It’s more pretty when you get to look a photo of it, because then you don’t have to deal with the wind. 🙂

Yep, ole’ February didn’t offer much in the way of enjoyable weather. I mean I generally like snow, but it was just so grey that it got pretty old. 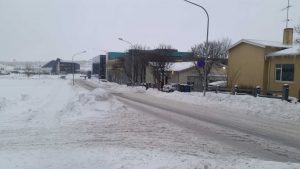 Fortunately Meem left behind a daylight lamp for us, which helps! Also, it’s not like we have to spend all our time outdoors. We find plenty of excuses to just chill inside – be they legitimate (such as a swarm of papers I’ll talk about in a minute) – or slightly less legitimate (but shhh) such as our participation in Bolludagur. 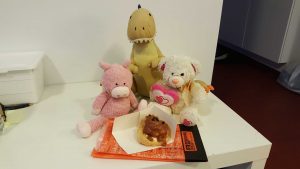 The cream puff went down nicely with some yummy oat milk – something we’ve become quite a fan of since moving here! 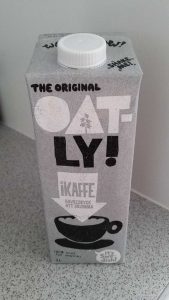 We put it in our coffee pretty much every day, at least when we can find it, the closest store sells out of the oat milk a lot. 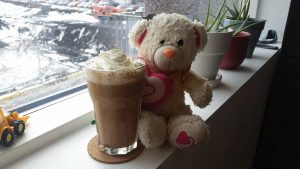 Or maybe we just drink too much coffee. Nah. 😀

Though to be fair I did go heavy on the coffee front during February. Not really because of my thesis per se, but rather because of the “productive procrastination” I’ve done as a way of avoiding my thesis as much as possible. In fairness to me, as the title implies, the procrastination was indeed quite productive. Over the course of about 30 days I wrote five papers, which is to say I completed all the papers for all my classes in one month. If 30 days doesn’t sound too impressive, that timeline is also filled with gaps due to exams and some travel. So if you just look at the number of days that I actually worked on papers, you’re looking more at 5 papers in 14 days – and these aren’t short papers either, nor are they on topics I find especially interesting. It’s without a doubt the biggest “paper push” I’ve ever done academically, and while the per-day writing period for the thesis will surpass the paper-month of February, it won’t generate as many separate papers on disparate topics.

So yeah, for February you could accurately, if not disparagingly, quote that famous Christmas song, “Oh, the weather outside is frightful, But inside you have to write papers.” Yet, despite typing so much that my carpal tunnel flared up, the good news is that insofar as things go that I loathe, only 2 group projects and a bunch of random case assignments stand between me and exams. With any luck I’ll be done with one group assignment by the end of this week, leaving little left for me to use to productively procrastinate on my thesis. That’s a good thing, while I’m a “good” productive procrastinator, I’m not so good at truly procrastinating.

Anyways, whining about the weather and school aside, February did offer some good times! 😀

For starters, February marks both SB and Valentino’s birthdays! This year SB is 47 and Valentino is 5. To celebrate, Valentino even got a card from one of his plushie friends, which while not specifically about his birthday, was good timing for it! 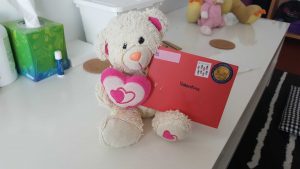 If you’ve followed this blog for awhile, you’ll remember that for Valentino + SB’s birthdays it is a tradition for me and the other Boys to make them a cake. Tristen was my original co-baker, but now it’s extended to Pig and Pigsten as well (with a guest spot for Broli this time too!). We also make them dinner, which usually features salmon. As for the cake, a staple over the years has always been strawberries – which makes sense given their favored status for both SB and Valentino, but this year they were especially yummy as a nice “summer taste” against the crummy February weather!

So, with strawberry cake in mind, the Boys and I got to it. 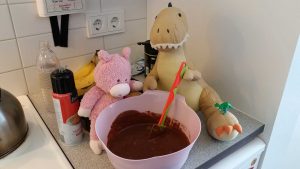 We don’t have much space to work here, nor do we have many implements, but we make due with our cheap and/or “salvaged” kitchenware! Cooking with the Boys is always an adventure, for instance Pigsten and Broli had to be kept out of the batter, I mean literally kept out, as in their entire bodies. 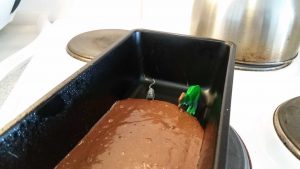 While the cake was baking we got started on the frosting. Our local store doesn’t have a big baking section, but we’ve made due with limited baking supplies in the past, and as such have gotten good at using pudding or jello to make flavor combinations that aren’t available at the store, in this case strawberry! 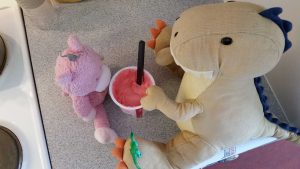 We also decided that strawberry icing wasn’t quite enough in the way of strawberries, so we sliced up some real strawberries and decorated the cake with them! Both SB and Valentino were big fans, and it tasted yummy! 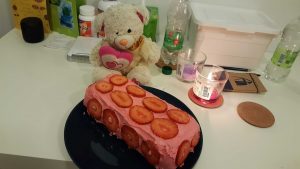 Valentino about to dive into his cake – if he looks less than thrilled that’s just his “concentrating” look he gets when it’s time to eat, Polar bears take their food very seriously.

Plus, the fun didn’t stop with salmon and cake, we got a surprise package from my Grandma as well. It contained one of the most glorious things on planet Earth: party mix. 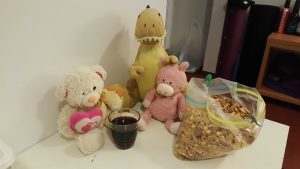 My Grandma had actually shipped this package way back in December, it just took for-ever to get here. Heck we didn’t even know about it until MIL asked if we’d ever received the package from my Grandma. We were like “Uh, what?” Turns out it was on its way, it was just moving very, very slowly. However, when it finally arrived it was in good shape and the party mix was still nicely sealed and not stale, woo!

Whether you know it as a party mix, snack mix, Chex mix, some chow variant, or something entirely else, there is only one thing you really need to know. There is my Grandma’s version, and then there are failed imitations. Fight me brah.

In fairness most Grandma things are the best in the world, this just so happens to be party mix. I’ve had it from several other people, and I’ve even had it from people copying the Grandma Recipe™ – and the result is always the same, “not even close” – and don’t even get me started on the store-bought stuff. 😛

Anyways, this is all to say that we were very excited for a big bag of party mix! We somehow even managed to not eat it in one sitting. Heck I think the bag lasted over a week.

But that wasn’t the only package we received, MIL had sent SB a birthday present, but in the box with SB’s present she included some of the Annie’s Bunnies that we used to love so much! 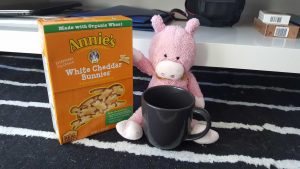 For reference the bunnies are gone too. 🙂

So yes, I guess you could say that we did what most people do when the weather outside is nasty, we ate – a lot. Also, in case you were wondering, not all of it was snack food, we even made a few fancy things like smoked lamb open-face sandwiches. 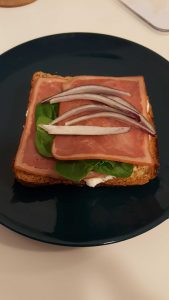 Which paired exceptionally well with a couple of nice Scottish beers!

The near-beer on the right was just the warm-up beer.

I guess the message here is that while the outside world in Iceland in February wasn’t too enjoyable, that the inside world was still full of good times. Sure, writing five papers wasn’t really fun, but it was still productive, though I guess now I have less excuses to keep nudging my thesis back. We also had a bit of travel that was very exciting, if not even more difficult insofar as the outdoors are concerned, but that’s for next post!

In the meantime, I’ll end on a positive note, which is that I’m currently looking out the window at bright blue skies (and it’s not dark at 3pm anymore!). It’s still quite cold, but blue skies are blue skies. 🙂 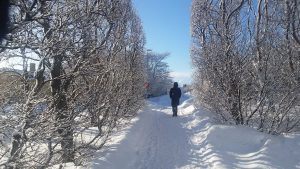