So today was the day that I was supposed to go to Malmö, Sweden to speak with members of the Red Cross about issues with human trafficking. Well, that didn’t pan out, because they were too busy, however, rather than cancel the trip, our professor decided to just take us on a day trip to Malmö anyways, and make it a “light” academic trip.

After reminding us 500 times of the time and place we were supposed to meet (10:20am, Nørreport station) and to not be late, our professor was about 10 minutes late herself. We then progressed into the next stage of the adventure, which involved trying to find the right platform. Sounds easy right? No, Nørreport is an old station, constructed in 1913.. entirely underground, there is no above ground portion. So its a winding maze of dark and stuffy passages that eventually open up to slightly less stuffy, but still fairly dark platforms. After we went to the complete wrong end of the station (remember we are being led by a Danish woman), we end up at the correct place and board the train to Sweden. The trip was pretty straightforward, aside from the fact that there were five of us per ticket (not even going to try to explain the ticket system on this blog), which created a lot of confusion with the conductor. Then the customs people came through the train, making it even more confusing.

But we got to Malmö, and went to have lunch.. at a place I can’t remember the name of, in fact I’m not sure I ever even saw the sign (EDIT: It was Restaurang HIPP). But lunch was AWESOME (and paid for by DIS). I will let the picture speak for itself. 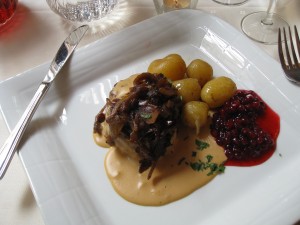 There was also a salad bar, but by the time we got their my cornflakes had long since worn off and I didn’t care to take a picture of it.

After lunch we chatted for a bit.. then.. everyone left. In typical DIS fashion, they took us to a place, then abandoned us, literally, in another country (lol). They’ve done this so many times now that I’ve grown used to having no idea where in the heck I am. But, I found a map, and decided to go walk around Malmö for a bit. I ended up grouped with 9 girls (God have mercy on my soul, never again), because we had to stick with 5 per ticket, and I had a ticket. The rest of the class and the DIS people faded into the crowded streets of Malmö.

So we walked around, and apparently the students had just passed their Gymnasium Exams (Its kind of like our high-school, except harder, but not yet college). And they have this big tradition of wearing these hats, and nice clothes.. and going bad sh*t insane. This photo does more to explain than words could (there are a couple of Americans in there as well): 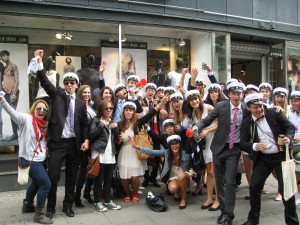 After more walking, we came to the only fair-trade, organic certified chocolate factory/shop in all of Sweden.. it was naturally expensive, so I ate literally one of every free sample in the store (For SB this will come as no great surprise). We were there awhile, remember who I was with, lol. After that we walked around some more (notice the pattern?), and saw some nifty things. I’ve decided I won’t be posting tons of pictures here, so if you’re wondering why there aren’t more, its because I’ll do some sort of album thing once I’m home.

The most AWESOME thing, was Saint Peter’s Church, which was built in 1319! Yes, 1319! I had a historygasm as we went inside (I’ve also been in a massive domed church, the “Marble Church” in Copenhagen, I have pictures, no worries). This church was A-MAZING, and just fortifies my desire to go to Rome someday. There were crypts all over the place, and one section of the church even had paintings on the walls from the 1300s.. completely untouched. Here is a shot of one part of the interior: 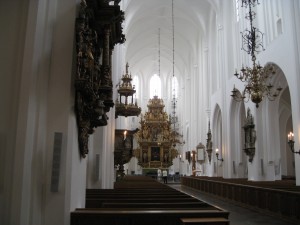 After that we headed back to the Central Station, as several people (myself included) had things to do. This wasn’t too bad, after we (me) figured out which platform we needed to be on. There were people outside handing out free loafs of bread (score!), no idea what they were for, or what the women said to me in Swedish, but I took the bread, happy day.

And that’s it for now, tomorrow I have a group presentation, then I’m off to Norway! Which will mean I will have officially been to ALL of Scandinavia (Finland apparently is Nordic, but not Scandinavian).

As a parting shot, anyone care to guess which restaurant this is? 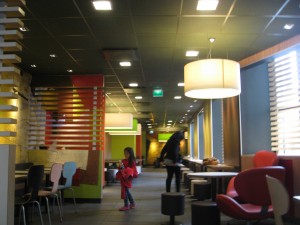 Highlight here for the answer: If you guessed McDonald’s, then you are correct! Crazy!