It is Spring Break here at Château de Taco.

I’m not doing anything fancy for the break, I’m really not doing much of anything since I’m not feeling well. Tis’ been a very lackluster Spring Break thus far.

When I originally started this blog – under a different name, and seemingly in a different life – I had a goal. That goal was to write a blog to myself, which is a goal still reflected in Rule 1. I had no intention of generating traffic, I didn’t want to do it for money, and really, I wasn’t even writing for my small but dedicated audience (which has actually grown larger than I realized, thanks to Google noming a few of my posts – hi random people!). This worked for awhile, but what I’ve found is that over time I’ve have sort of lost my passion for writing a fair number of my posts.

This blog, prior to this post, had 317,915 Words, as a reference, according to Amazon’s database (and it’s Amazon, so you know their database is cray-cray), the median length of all books is approximately 64,000 words. Further, literary classic and bonafide tome “Moby Dick” by Herman Melville had only 209,117 words. So, in writing this blog, I have literally wrote more than 100,000 words beyond the length of Moby Dick. And as a reference, I am nearly 60% of the way through writing “War and Peace” by Leo Tolstoy. In other words, this blog is already longer than roughly 96% of  fictional literary works in existence (and in case you were wondering, no I do not exist, this actually all just a story written by an increasingly sentient AI).

So I’m going to be changing it. Here is what the change will look like:

And there you have it. I’m not saying that I won’t continue to post “diary-like” posts that recount my adventures, I will. I just don’t know if they are going to pop up every single week anymore. You can also expect some posts to pop up that have nothing to do with my recent activities, a good example would be this one.

The overall point is, I am going to be tweaking (not uprooting, just tweaking) the “theme” of this blog. It’s no longer going to be something solely devoted to my recent exploits. It’s now going to include things that I want to write about, even if no one else gives the slightest of cares about them. There might also be a trend towards shorter posts from time to time.

Again, I’m not saying that anyone other than me took Dinosaur Bear into its current course, but upon reflection I’ve decided to sail for a slightly different horizon.

But yeah there will still be beer.

P.S. – This is also the first time in.. literally years that I have posted a post at the same time I wrote it. Interesting.

P.P.S. – The Mayflower II entering New York Harbor in 1957, yes it’s a real photo, I have all the awesome photos. 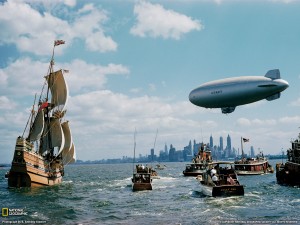