Alright, so I am literally on the clock. My 4 year old laptop battery doesn’t last nearly as long as it used to and the hostel failed to mention the internet requires you to be in the lobby. Not a huge deal, but it makes it hard to be online for very long. Additionally, the wireless itself is sketchy, last night it was literally running slower than dial-up from 1995. So don’t expect much in the way of pictures, or length.

The flight from Copenhagen was pretty uneventful, there was a 20 minutes delay because the radio had to be replaced, and then some turbulence from the low cloud covers (getting to see the wings cutting the dense clouds was actually pretty sweet), but other than that, no large issues. When I landed in Berlin it was sprinkling, but nothing too heavy. Tegel airport ehm.. leaves much to be desired in the way of helping you navigate. See, I know a little German, but the thing is, the signs aren’t in Germany, they are just pictures. And not only are they just pictures, they are really, really confusing pictures. For instance, an ATM machine is a person holding a tiny, tiny square thing (it looks like a person holding a suitcase). And buses, well, it just lists the bus route, so if you don’t know what route you need, its kind of rough. But I managed, obviously. First interactions with Germans were not so pleasant, or maybe I’m just used to the reserved Danes by now, so that the in-your-face Germans are creating some culture shock. Additionally, these were airport and transport people, so they are normally mean anywhere you go. I found the bus I needed, TXL, which ended up being a horrific experience. Essentially, Tegel airport has no rail connections, so you HAVE to take a bus (or Taxis). The main bus that goes to the Hauptbahnhof (Central Station) is TXL. Well, it started pouring, and there were at least 2x as many people on the bus as it was designed to carry. Never in my entire life have I been so cramped on a bus, ever. People were literally on top of each other, and I do mean literally. The rain was also coming in the windows and vents, which no one could reach to close since it was so cramped. Once I got the station I was more than happy to get rained on.

I thought I got lost on the way to the hostel, but turns out it was just further down the street than I thought it was (or they advertised). Check in went smoothly, they spoke fairly decent English, and I went and unpacked. Later I went back to the station for some food, as, and I cannot emphasize this enough, the station is freaking massive. Since then I’ve done a lot of walking around, scouting us places for SB and I to go to. The only thing I’ve really done as far as going in someplace is touring the Reichstag (Think of it as German Parliament). The famous glass dome at the top is closing for the entirety of this week for cleaning, so I literally slipped into one of the very last tours. SB won’t be able to go up into the dome, but that’s what she gets for going to a beach in Grenada. Tough Tooties. Outside of that, I’ve really just been checking things out and getting oriented as mentioned. After studying Germany for two years I’ve been able to navigate the city largely without a map. Which is good, because maps make you a target, and beggars and thieves are everywhere here. In fact, within 30 seconds of entering the central station the first time I was practically mobbed by Turkish women wanting money for their children. Its a huge scam, and I knew about it, and they even followed the exact pattern I figured they would. No big deal until they tried to grab my backpack, but brushing them away works wonders, I think most people are too passive and therefore give them money and probably get pick-pocketed by their children (thieves in training) in the process.

The weather has been mixed, its either GORGEOUS or pouring and humid (I’ve also been dying in the 80 degree temperatures, those of you at home may laugh, but spend 6 weeks in the 60s with no humidity and the 80s seem like an inferno, also there is no AC here and the hostel window doesn’t open very far). I had to buy a new umbrella, mine literally snapped in half the first time I used it here. Purchasing it was my first full exchange in the German language, and it went smoothly. However, not all conversations are as easy as that one and I tend to stick to English whenever possible just to prevent massive confusion. The hostel hasn’t been too bad, but being my first hostel there is some adjusting that must be done, such as it being really crowded in all the public areas and always being loud. The first night wasn’t too bad, but then a group of 60+, 10-13 year old English children came and they spend most of their times running along the hallways randomly banging on doors then scurrying away in a trail of laughter. But all in all, its not bad. Especially since breakfast is supposed to cost money, but the past two days no one has been at the door, so its just been completely free. Its standard Continental fare, and no where near the quality of the Scottish hotel’s food.

But for today, I will be attempting to get back to Tegel to pick up SB this evening. Based on the complexity of the signs, and the lack of English (bus drivers speak none) I’m worried she’ll end up in Prague or someplace. I think I’ve figured out a way we can bypass the TXL bus, which I’m sure will be even worse with her larger suitcase. I’m looking forward to really getting started with being a tourist tomorrow and for showing SB some of the good food (Doner, Currywurst) as well as the places I’ve found. If it sounds like I’m cutting short, its because I am, my laptop is about to die. That and the French kids next to me are becoming increasingly annoying (i.e. being French).

Not sure when I’ll update next, it depends on time and internet. But all is well in Berlin, and I’ve already had two beers I’ve never had before, so I’m off to a good start! 🙂 My only qualm is that maps are not free here, I spent two hours trying to find a free one, and nope, they do not exist. The Police also have a MUCH larger presence here than in Copenhagen, but that’s not inherently a bad thing. Loving the history though, oh man, so much stuff everywhere.

Enjoy this one picture of the Reichstag, it took me 13 minutes to upload it. 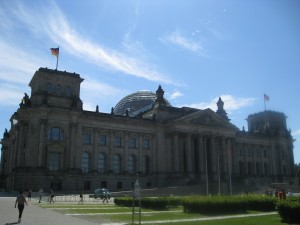